FOR THE PAST few weeks I've been trying to find out why Canadians are going in for what is probably the biggest revival of astrology since the fall of Babylon, which invented it.

Nobody even looks at you out of the corner of an eye now if you say your moon is in Pisces. Horoscopes now appear regularly in most women’s magazines, like recipes or fashions. Most newspapers run a daily horoscope by someone with a mysterious name, like Biblos or Omarr. A course in astrology packed night classes at Centennial College of Applied Arts and Technology in Toronto last fall and is scheduled again for this fall. TV now blesses Canadian homes with such expressions as “Happy Transits!” On Channel 11, in Hamilton, Ontario, The Sage of Aquarius, dressed in black robes and wearing a medallion the size of a saucer, answers questions put to him by a deadly serious audience.

Simon & Schuster sell 160,000 Horoscope Guides a year in Canada, with Winnipeg the leading market, and Edmonton next. They also sold 200,000 copies of Arlene Dahl’s Beauty Scope in the first four months after it came on the market in February. This gives little hints such as, “Your Taurus lover likes to eat” (and a strange thing is that no copies are ever returned from booksellers in Vancouver).

On top of all this there is sharply increased interest in tarot cards, numerology, teacup reading and palmistry, which,

I’m told by an old palm reader, is very big in a belt that stretches from the Okanagan Valley through northern Saskatchewan and down into northern Ontario, where hard-rock miners look around to see if anybody is watching, then nip into dinky little teashops to find out if their obstacle line, beneath their fourth finger, crosses their love line.

Astrologists believe the cause of all this is that the world is moving into a better age, the Aquarian Age. because of a slight shift in the position of the sun among the stars each spring. This is the theme of the song Aquarius in the musical Hair. Allen Spraggett, Toronto Daily Star columnist and author of The Unexplained, who believes there’s something in astrology, although he admits nobody knows what, thinks it’s a symptom of the same thing that’s turning people to drugs. Spraggett points out that the psychologist Jung believed in it. J. W. Smallwood, vice-president of Simon & Schuster of Canada, a cheerful Aquarius getting more and more cheerful by the day, smiled at me as if he’d just contacted the cosmic egg, and said, “You’d go dingers if you sat behind this desk and tried to figure out what’s going to sell.” He added thoughtfully as good an analysis as any: “You know, there are people who think they can talk to plants?”

I have some theories of my own. For one thing, I think astrology appeals to people who like to write a lot. Since word leaked out that I was interested in astrology, I’ve been given an estimated 85,000 words of reading material without asking for it, and which I’m not going to read as most of it is typed single-spaced on blotting paper or looks as if it were Xeroxed by ectoplasm. One man sends me something every day, on different-sized sheets, in print like a faint whisper from The Other Side. The last one I received said ancient astrologers used to believe each planet was ruled by angels, but that now it has been proven they aren’t. This message was accompanied by a cheerful note, ending with: “Did you know Mackenzie King was a seer?”

Astrologers can write endlessly about anything, and can get by on some of the safest predictions known to man, along with some of the most puzzling remarks. “A child who has pets uses his domestic urges or Moon in his birthchart,” one writer said, and floated off like Ophelia on to another subject.

People get the same kind of pleasure from recommending horoscope readers that they used to get from knowing bootleggers. I mentioned to a circulation man I’ve known for years that I was writing an article on astrology, and he gave me the name of a woman with a PhD in sociology, who said she would draw up my horoscope. When I didn’t know the hour of my birth, she said

briskly she’d punch it out for noon, although it must have got caught in a cosmic draft because I never got it.

Nobody needs to worry about pinning anything down and the laws of physics are loose and congenial. One talented artist I met at a party told me I had a solar system inside me just like the one outside me. She didn’t explain it, or apologize for it. She just gave it to me with a plate of peanuts, and left it with me.

Men who believe in astrology do the same thing, except that they get sore if you don’t believe them. One man, a lean accountant who I happen to know is looking for a Pisces wife, told me I was made of 75 percent water and who was I to sit there saying the moon didn’t raise tides in me? The stars and I both surged with electrons and the only reasons I didn’t get vibrated on to another plane when I walked past an electric generator was that it was shielded — and he implied that if I'd reached 58 without having a psychic experience, so was I.

Women usually laugh if you accuse them of believing in horoscopes, but women don’t always feel funny when they laugh. A woman will pick up a horoscope, say, “Listen to this nonsense,” read a paragraph aloud and in about 10 seconds forget you are there and go on reading as if she had just discovered gravity.

Many women carry little horoscopes in their purses — such as the Dell Purse Book — although they claim they don’t believe them but just look at them to see if yesterday’s horoscope was right.

A woman will also sit waiting for an hour to have her teacup read, then come out flushed and distraught looking and say, “He’s a phony,” already making plans to get a better reading next Saturday, her faith in magic intact.

But women know what they’re doing, all the same. Astrology is one of the few fields left that leave you feeling like something more than a number in the income-tax office. I know I felt something of this last week when I dropped into a teashop to see what was in my future. A tall, distinguished, innocent-looking man with grey sideburns greeted me affably in a little booth. He set an oven timer, read my teacup and tarot cards, ticked off my horoscope, put my hands on a crystal ball, broke into a little chant, said I was a poet and that all Geminis were, twisted my palms up and said I had some money coming and that I was going to Japan, and that I had a pothole in the middle of my hand that meant I'd never hold on to any money, and when I said by God he was right but how did he know, he said, “Cripes! That knowledge is as old as Egypt.”

I left no closer to answering the riddle of life, but it was the first time I’d felt like a fascinating character since I passed 30. □ 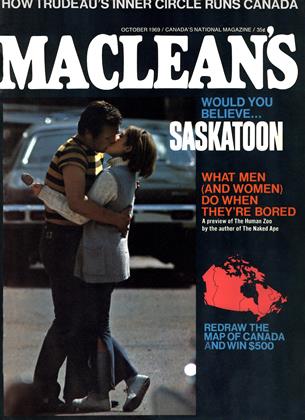