For those of us who attended the trial every day, the courtroom was an enclosed world with a life of its own, not unlike life aboard a cruise ship . . .

EVERY JURYMAN, every court reporter, every tyro barrister knows that snug intimacy. A place on the press bench is like a royal box at the Human Comedy, a vantage point to witness the small dramas of life. On such a bench in such a drowsing courtroom a radical and mildly eccentric English noblewoman named Jessica Mitford sat with some 40 colleagues of the world’s press to report the trial for conspiracy of Dr. Benjamin Spock, the Reverend William Sloane Coffin Jr., Michael Ferber, Mitchell Goodman and Marcus Raskin.

The four-week proceedings in Judge Francis J. W. Ford’s courtroom on the 12th floor of the Boston Post Office Building will not become an anthologist’s item among the world’s great trials. They lacked passion. Dreyfusard fury, a thundering Darrow. This was a trial of grey men, staged by lawyers with pink-stringed briefs, in the dusty Pickwickian tradition of Dodson and Fogg.

It might have been different, for the accused were not unheroic, their challenge to authority not small. Spock, the genial, big-boned baby doctor, loomed in the box like a granite symbol of the decent Yankee. His Common Sense Book of Baby and Child Care was second only to the Bible among best sellers; after 50 years of political orthodoxy, he had been moved to denounce a Vietnam war he called “totally, abominably, illegal.” The “Boston Five” had invited prosecution, but they had not conspired — they hardly knew each other. Individually, they urged American conscripts to burn or turn in draft cards. They were prosecuted, a Justice Department official told Miss Mitford, “to provide a graceful way out” for Gen. Lewis Hershey, then a figure of controversy for urging that young men who demonstrate against the draft laws be subject to immediate call-up. Individually, the five had invited charges of counseling conscripts to burn their draft cards; they hadn’t expected charges of conspiracy, which

broaden the rules of evidence. Damaging testimony against one defendant, which would normally be ruled out, is allowed to be heard because it is admissible against another. Instructed on the law by 85-year-old Judge Ford, a jury found all except Raskin guilty. The four were each sentenced to two years in penitentiary, but the convictions were reversed by a court of appeal.

The charge was conspiracy, something the five were obliged in honesty to deny. Dubiously aided by what Miss Mitford maliciously terms “a pride of lawyers,” these leaders of the peace movement were impelled to justify themselves. They rationalized. They dissembled. What began for them as a moral crusade against the world’s greatest military power was Dodsonned and Fogged into the pettiest legalism. In Coffin’s regretful phrase: “Few frustrations are comparable to those of having to argue a big case in a small way.”

The government message in the Spock trial, Miss Mitford reports, “came over loud and clear”: you are not as free as you think you are. The message of the war protesters was

sadly muffled. Only on the evening after the conviction, when the Spocks waltzed like honeymooners, was there the warmth of recognition, a spontaneous standing ovation: “Parker

House bar regulars, traveling salesmen, Kiwanis - convention types, middle-aged couples out for a night on the town — all clapping as though their lives depended on it, all for that brief moment co-conspirators.”

The trial record isn’t all. When she moves from reporting to commentary, Jessica Mitford discerns in Spock a “towering personification of wrath.” As coolly, as good-humoredly as she indicted the funeral industry in her American Way of Death, she here indicts the conspiracy theory, the irascible judge, the overawed jury. Her low-keyed attack is more telling than rhetoric. She is there in the courtroom, and so are you. She appraises her light-grey heroes in an urbane voice, but for her they are heroes still. Her unpolemical tone is right. For surely, in the reporting of the trials of our time, we have experienced a surfeit of indignation.

The man who foretold Götterdämmerung

FOR ALMOST 25 years Blair Fraser reported Ottawa to Canadians through the pages of Maclean’s, establishing an unrivaled reputation for constant wisdom and occasional prophecy. Now, 18 months after his death in a canoeing accident, his sons have published a selection of his reports, lectures and letters. It comes as a striking reminder of the span of his interests. He was a most acute parliamentary reporter. Three years before John Diefenbaker became Conservative leader, Fraser was documenting an “almost morbid sensitivity to criticism”; 15 months before Diefenbaker’s first election victory, Fraser was warning of an impending “Gritterdämmerung” (the twilight of the Grits). He was a diligent world

traveler from World War II to China’s cultural revolution. His passion for the wilderness and the north is reflected in two essays. But what this collection underscores is Fraser’s role as an English Canadian who understood Quebec, where he spent the first half of his working life. In 1945 he was questioning Quebec City pubkeepers about payoffs for liquor licenses under Duplessis, and in 1968 he was defining René Lévesque as the reasonable separatist. His sensitivity to French-Canadian feeling was part of Fraser’s specially civilized quality, and this collection represents it well. 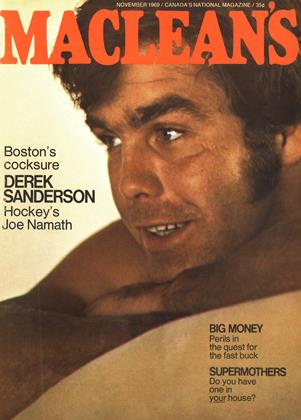