WHAT THE CANADIAN INDIAN WANTS FROM YOU

IT IS NOT POSSIBLE to say when the gull began to die. Perhaps the beginning was inside a grey shell splotched with brown and black in a coarse nest of reeds and grass, for the poison is in every living thing. But after 21 days there was a tapping noise and a cracking and struggling as the bird, wet and scrawny and eager, became a part of the world.

The gull was born hungry for fish flesh, where the poison is concentrated. It ate voraciously and one day in midsummer left the nest, flopped into the air and streamed away. The brown bird knew instinctively how to glide on thermals, how to descend feet-first and pluck dead fish from the surface of the water. On and over the water and the shore it survived a winter and another and another. It molted once a year and turned white by degrees, and its pinkish legs turned yellow.

The fourth summer was the last. In late July and early August a new generation of birds leaves the nests and food becomes scarce. Under stress, the mature gull began to burn up its body fat, where the poison was stored. And there must have been a moment when, wheeling and mewling over the water, it felt the first tentative squeeze of pain.

Dichloro-diphenyl-trichloro-ethane is a pink powder with a fresh frothy smell, like a wet field in March. Mixed with water and sprayed into the air, DDT kills

bugs with impartial efficiency. The pesticide was developed during World War II to control body lice. It has since been used wherever insects are a threat to crops, a menace to health or a nuisance. Scientists knew years ago that DDT was an extremely stable compound with a long half-life, that it accumulated in soil and water and that some of it rose in water vapor and came down in rain. As long ago as 1946 two U.S. naturalists warned that it was a potential menace to wildlife. Nobody listened.

The gull was the victim of a terrible arithmetic that has become apparent in the past five years. It sickened because

traces of the pesticide in water were absorbed by phytoplankton. This minute plant life was the first link in a food chain of which the gull was the last. The amount of pesticide increased in each link because it has a stable chemical structure, so that scarcely any of it was expelled by the host bodies as waste.

pike, bass, pickerel, bowfin—that preyed on the minnows were, at 10 to 20 parts DDT per million, quite literally poisonous to the gull.

The young bird died horribly. The DDT in its body fat, which comprised between 50 and 100 parts per million, was released in massive doses during the time of stress and hunger. The poison inhibited the central nervous system. For several hours there was a thrashing and struggling. There were many convulsions. Finally the gull fluttered onto the surface of the water. The head sank under the water. The perfect wings beat once, twice, and were still. □ 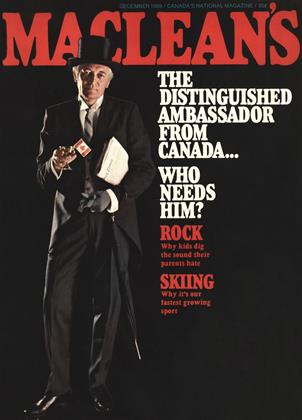