CONGRATULATIONS on your Editorial,Give Students A Voice — But Let’s Not Let Student Power Spell Destruction. You say, “We would be more impressed if the work ethic had been debunked by people who have had more firsthand familiarity with work...” I suspect that a fairly large proportion of the protesting students are protesting simply because they do not wish to work. The rejection of the scholastic and moral authority of the professor, the viewing of him as “conditioned” rather than “educated,” is typical of many. Speaking as a university graduate, I know that this charge, in the vast majority of cases, is not true. If the younger generation cannot profit from the experience of past generations, it cannot possibly progress beyond the limits reached PREVIOUSLY.-DONALD W. LAMONT,

You were right on the beam when you suggested in an editorial that the roots of the campus revolutions are that some students find it pleasanter to talk and agitate than to work. Is there not something illogical in the fact that a generation of students which wants to abolish the grading of students, wants to undertake the grading of professors? Let us stop pandering to a generation brought up by overpermissive parents, and start back where the university should be: namely, at the task of increasing knowledge. Let the present generation, after it has been educated and not before, start out to put the world right. — PROF. RICHARD PRESTON, CENTER FOR COMMONWEALTH STUDIES. DUKE UNIVERSITY, DURHAM, NORTH CAROLINA

Re Can Radio Make A Comeback? : Who listens to radio? We do — the people who live beyond the southern fringe of Canada There is no TV, newspapers arrive at least one day late, so radio is our best means of finding out what is going on in the world. Yet to receive radio we must buy Japanese transistors (North American-made electric radios just aren’t good enough) and install outside antennas, so that we can, with careful listening, hear a low-power station 150 miles or more away. In the evening this power is reduced even more due to Department of Transport regulations. It doesn’t matter how much money the CBC puts into its programming — until more

Jon Ruddy should have studied his Forest Botany a little better before he made the statement that Scotch Pine is “coarse and almost useless for lumber” (Who Gets Rich At Christmas Turning Nice Green Pines Into Nice Green Dollars?, Reports). He would have found that lumber from Scotch Pine ranks practically at the top of all coniferous trees in Europe.

Jon Ruddy replies: “What I meant was that the Scotch Pine was almost useless as lumber in Canada.”

In discussing whether evaluation of students by exams should be eliminated from a university’s system, both Dr. Claude Bissell and student leader Steve Langdon failed to make the most important point (Maclean’s Joins A Dialogue On Student Power). At present a degree is one indication of the quality of a person’s knowledge and training. This would no longer be the case if universities granted degrees to students whose merits they have not evaluated. If having a degree is to be worthwhile, those who favor the abolition of exams would do well to propose a more accurate method of evaluating what a student knows.

The man on the street

On page 25 of your November issue, in the. article Toronto The Cool, you show a picture of an elderly gent1e~ man. Perhaps you are not aware of the eminence of the gentleman. He is Dr. Andrew Hunt er. Professor Emer itus of the Uni versity of Toronto. After chairing first the Department of Biochemistry and then the Depart mentof Pathologi cal Chemistry, he retired from the uni~ versity at the close of World War II He then accepted an appointment on the staff of the Biochemistry Department of The Hospital for Sick Children. He was

active here until recently, when he retired again on his 90th birthday. — s. H.

It seems odd, indeed, that Sidney Katz (What’s Happening In Medicine) would waste all that space on the item “Where’s the Other Woman?” when all he had to do was to refer to one of Mark Twain’s observations: “When man, woman and opportunity meet, the Devil lies down and sleeps soundly, for he knows his work will be well done.”

Judging by her comments on the film Hang ’Em High (Reviews), Jeannine Locke has an axe to grind: “public acceptance of violence.” What she fails to grasp, however, is that hers is not a very original axe. Had she been less intent on divining the ages of her fellow spectators, and a little more interested in the plot, which, incidentally, was hailed by critics as the most intelligent western in a long time, she might have noticed that the film itself was a blatant condemnation of the manner in which society tends to “overlook” the more morbid side of its nature.

The issue containing Kim Philby’s Silent War With The West has just reached me. In a footnote, you say that Daily Expres¿ reporter Donald Seaman exposed the disappearance of Burgess and Maclean. This is not true, Seaman was not on the scene until later. The man on whose information I printed the story in the Express was Larry Solon, chief correspondent of the Express in Paris. — s. c. CHANDLER

We would like to draw your attention to what we, employees of the CBC Television newsroom, feel is a glaring oversight in Meanwhile, Back At Tht Studio .... part of your special report on the CBC. Trinka. The Weasel, The Asp, Mr, Snarly, Bulgy qnd Huffin Puffin are appreciative of the recognition in your article; however, only „ partial list of the inhabitants was included and this has caused no end of friction, jealousy and ill feeling. Would it be possible fc: you to include, in a future edition, the following names? Quasimodo; the Trembling Air Sucker; Shot-gun; Moll Buzzer; Mr. Crime; Mr Bigot; the Flasher; Great Grunt; Mr. Hate; Star with the jars on top; I unchhooks; Mother; Friendly Gnome; Leave-it-with-Me; the Ay-rab and Colonel Tipple. — DR. CYCLOPS AND MEATHEAD, CBC, TELEVISION NEWSROOM, TORONTO

I would like to point out to your readers that the article I wrote for your December issue was a treatise on the attitude of most professional hockey owners toward education The title you used — Big, Fast & Dumb — was not the title I suggested. As I explained in the article, most hockey players are intelligent men who have simply been deprived of the opportunity to receive a formal education. The caricature included with the article was obviously the product of someone who has never met a professional hockey player. I was disappointed in your handling of this article, since it appeared that I had been responsible for the caricature and for the title.

* Do we detect subtle reference to a double standard on the part of hockey’s moguls who, while convincing talented youths and their dazed parents that education is unimportant, insure that their own offspring attend the finest education/athletic institutions? Alan Eagleson observed that “growing numbers of Canadian boys are enrolling at such American schools as ... Lawrence College ...” Obviously he meant St. Lawrence University, in Canton, New York. Lawrence College is in Lawrence, Kansas, and although an excellent school, does not boast a hockey team. SLU has for many years been offering bright and talented Canadian boys just what the hockey moguls and our own Canadian universities have denied them — an opportunity to play good, competitive hockey while obtaining a degree of unquestioned accreditation. 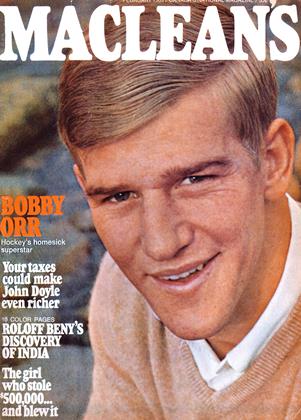