The Lakehead: view from inside a vision / Hockey: why not Vancouver? / Pretty girls: they’re at the bank

RE A New Vision For The Near North: Port Arthur and Fort William are not anywhere near the north; we are only beginning to get western. Port Arthur’s Mayor Saul Laskin is not yet the “big gun” — Fort William also has a mayor, Ernest Reed, whom for some reason you have ignored.

ík Because Dr. W. G. Tamblyn, the president of Lakehead University, is not overstuffed with academic livery, he is able to administrate without letting administration machinery become a sacred cow between him and his students. So far, he has solved our problems personally. Why protest? — JouNi KRAFT, LAKEHEAD UNIVERSITY, PORT ARTHUR, ONT.

* I resent the statement that, until the arrival of conductor Boris Brott, the Lakehead’s “most lustrous cultural contribution was . . . Bobby Curtola.” There was no mention of the Fort William Male Choir, under the direction of Norman J. Kleven. This choir won Canada’s Centennial Competition in Saint John, NB, July 1967, participated in the International Eisteddfod, Llangollen, Wales, in July 1963, and has performed in Europe, the U.S. and many places in Canada.

* Before the Fort William Male Choir, we had the Lydian Ladies’ Choir. Back further, there were the thrilling concerts given by Jean Hessen Pengelly, a native of Port Arthur.

>k Does Ross consider Vancouver, too, as being in the north? The Lakehead is situated in the same parallel and approximately the same distance from the U.S. border. To judge by Ross’s article, Fort William, the larger of the twin cities, barely exists. Next time tell it like it is.

* Unadulterated rubbish. If Maclean’s wishes to write constructively, let it write of the audacity of the picayune minister of the Ontario government autocratically and insolently imposing his will upon the 100,000 people of Fort William, Port Arthur, Neebing and Shuniah in the matter of compulsory amalgamation, without benefit of plebiscite.

>k Your article on the Lakehead makes the place sound so interesting that we are seriously considering moving there. —

I wish you had asked NHL President Clarence Campbell more questions about Vancouver’s entry into the league (Maclean’s Interview). His argument against it at this time is hogwash: “The difficulty is that there are no places in Canada outside Toronto and Montreal that have the consumer spending to support an NHL organization.” We have a new ice palace, and the powers-that-be know the customers would fill it — but Campbell and his eastern cronies say “No.” The real reason is simple: Vancouver would have one third of all the TV income now split by Toronto and Montreal.

f As a college-hockey fan, I object to J. P. Dubey’s Mailbag claim that U.S. colleges “have been offering Canadian boys what our Canadian universities deny them — an opportunity to play good, competitive hockey.” A few facts: U.S. colleges offer poor competition because of the outmoded rule system they follow. Their teams will not come to Canada to play Canadian colleges; all games must be played in the U.S. Canadian college teams usually defeat Senior “A” and Junior “A” teams on the rare occasions that these semi-pro teams expose themselves to outside competition (arranging a game with them is like getting an NHL team to play Russia). - J. D.

We at the Brockville,' Ont., branch óf The Royal Bank of Canada take strong exception to the caustic remarks about the “mousy” appearance of store and bank clerks, in your story on bank clerk Kathleen Ann Spiller, of Penticton, BC (Anyone Can Steal A Million). We know that girls who work for The Royal Bank,

or any other bank, for that matter, compare favorably with girls in any other line of business, even those employed by Maclean’s, and we consider that you owe us, Eaton’s clerks and comptometer operators an apology. -— JO-ANN DAVIS, B. RICHARDSON, GRACE OGILVIE, MARGARET LETTS, PENNY WHITCROFT, JOYCE STEWART, KAY ROBERTSON, JOAN GARNFORD, DIANE MCDONALD, THELMA WILLIAMSON, JUDY SARGENT, N. J. RIEVELEY, CARRIE GREAVES, BROCKVILLE, ONT.

Heart donors: an okay from BC

In your article on heart transplants (The Hunt For A Beating Heart) it’s stated that legislation does not exist in Canada that permits the donor to agree to a transplant, since, in essence, the body is deemed to belong to the next of kin. I would point out that an Act to Facilitate the Donation of Human Tissue for Therapeutic and Research Purposes received assent in the BC Legislature on April 6,

Editor’s note: In effect, the BC act duplicates the recent legislation in Ontario mentioned in the story. Administrative heads of hospitals may now authorize tissue donations in the case of people who die in hospital. But with people who die at home, donations must still be authorized by the next of kin.

P. Bowen, of Ottawa, says Maclean’s is too prejudiced and too preoccupied with Toronto (Mailbag). I say BAH! YOU are the only people I know who can actually say anything satisfactory about Toronto. Keep up the lousy work.

I liked the tone of your Editorial, Let This Be Our Last Year In NATO, but your arguments fail to convince. Canadian foreign policy, you contend, should be more independent of the U.S. How would this independence be enhanced by ending our collaboration in an alliance of 15 and concentrating all of our defense activity (as you suggest) within an alliance of two, Canada and the U.S.? You reject any policy that would be “antagonistic” to the U.S. I find it difficult, however, to think of many actions that the U.S. would consider more “antagonistic” than withdrawal from NATO. You hold that the West Europeans, on their own, could now match the conventional forces of the Warsaw Pact. Which West European country, apart from West Germany, would be at all likely to augment greatly its military muscle? Would continued on page 20

an increase in German military preponderance contribute to the relaxation of tension in central Europe, still the world’s most explosive piece of real estate? - PROF, PEYTON V. LYON (CARLE-

Giggles in the “wasteland”

The good British M&B writing team of TV’s Comedy Café, from Montreal, are as Don Bell says, getting laughs in Toronto (Is The Rest of Canada Really Ready For These Two . . . Uh . . . Gagmen?, Reports). They will get more laughs when they trust their Montreal (wasteland) audience less. The team’s John Morgan is quoted: “Shows are taped before a live audience. Any line that doesn't get a rise is spliced off the videotape.” One feels in Toronto that the Montreal audience would not laugh at the best lines. On evidence of sight, sound (and smell), it giggles at the banal. So M&B’s best lines may never reach us here in gay, laughter-loving Toronto. P. MORTON, TORONTO

Somehow T doubt that the American populace is very worried about Jon Ruddy’s contention that “the huddled masses of the American middle class, yearning to breathe free, are swarming to Canada in search of a saner life” (The Americans Who Voted With Their Feet). The 19,038 people who “swarmed” to Canada in 1967 amount to less than one-hundredth of one percent of the total American population.

* During the past year, we’ve been acquainting ourselves with Canadian publications, TV and radio. It’s all quite refreshing, almost exciting to an American Negro family newly immigrated to Montreal from the suburbs of New York. I wondered just what your article or report was trying to project to your Canadian readers. I wondered if they, or you, knew anything about the Negroes who immigrated here from the States. Why. who, and are they happy here? I wondered if you knew that there are a few who came well-heeled, well-educated and seeking a chance to exist equally with their fellow men. I wondered if you knew it was the Barry Ashleys of the world we were trying to escape. Poor Canada — she welcomes and needs the Americans, but what will she do with the dirt they will track across her carpet? And they will! I know my white brethren — how well I know them, having been born in the ghetto of Harlem, then moving to the well-heeled, high-class ghettos of the suburbs. For the first time in my life, here in beautiful Montreal. I don’t live in a ghetto. My greatest fear living here in Canada is that my children may be subjected to the pain and degradation that only a white American who has fled his country because of integration can inflict. I pray this land, this wonderful land, is vast enough that “never the twain shall meet.” 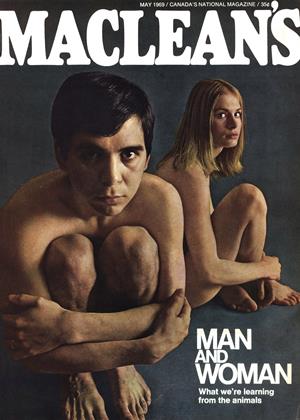