Want to put on a successful summer festival? Here's the mad, mad formula — which happens to work

Want to put on a successful summer festival? Here's the mad, mad formula — which happens to work

Want to put on a successful summer festival? Here’s the mad, mad formula — which happens to work

Hourism advertisements for Canada used to show glowing vistas of woods, beaches, golf courses, lakes and other edens for sportsmen and cottagers. These rapturous illustrations of our native delights still appear — but among them now nestle invitations to theatrical and musical events, art galleries and museums, Indian potlatches, folk-dance carnivals and international film festivals.

Ad-watchers in, say, Auckland, New Zealand, who read these come-ons, must understand that from being an unspoiled wilderness this country has overnight become a positive garden of haute culture.

Our festival fad began in 1953, when the first Stratford Festival persuaded an astonished world that orchids could be bred in a desert. It took Canadians a little longer to realize that tourists would come here to spend hundreds of thousands of dollars on what we had always considered arty frills — but the idea took hold so quickly that the people in Paris, Ont., were soon talking about an annual Folies Bergères.

Vancouver opted for a grand international mixture of concert and opera, Charlottetown for Canadian musicals, Niagara-on-the-Lake for Shaw, and other cultural oases for anything from Youth Theatre to Sound-andLight spectacles. Dawson City even tried a Gold Rush Festival, but found the modern thrill-seeker less eager to bring the gold in than his forebears had been to bring it out.

Somehow or other I got mixed up in the birth of several of these prodigies and picked up a little midwifery along the way, as much by error as trial. I therefore pass along the following pearls of wisdom to all those who contemplate going to a festival, or into the festival business.

First of all, your true summer festival works only in a place next to impossible to get to. Take Niagara-onthe-Lake, to find which you need a four-color road-map. Or take the ferry to PEI — if you can get on it. Stratford had the right idea in its second season when the city tore up all the roads into town and persuaded the province the following year to rebuild

the highways and put in detours.

Next, accommodation should be so arranged that the demand for rooms far exceeds the supply. People should be ready to suffer for art.

Restaurants must be suitably careless as to both food and time, so that audiences arrive hungry and hot, their frustration assuageable only by food for the spirit. Failure to understand this cost Vancouver its festival: too many hotels and motels and good restaurants are fatal to high art.

A special effort must be made to woo teenagers, by playing all the music at top volume, introducing fourletter words wherever possible, and encouraging the actors to appear in public with long hair even when their roles call for crew-cuts. But a special appeal must also be made to tourists who come in families with children, by playing soft music, eschewing any suggestion of sex, and keeping them miles away from the actors — preferably at puppet shows in the park.

It should be clearly understood that opening nights are for high society,

drunk or sober. They have to come some time, and one might as well get it over with. The commoners in shorts and T-shirts will then feel privileged to come later — after all, there are so few opening nights and so few elite.

Above all, a festival is no fun unless the attraction is hard to get into. Whether it’s a play or a concert, an art gallery or a pop-and-rock rally, the weary traveler must be convinced that the golden gate is all but impassable. Taxis must be unobtainable, tickets should be scarce, ushers must show you to already-occupied seats, and the airconditioning ought periodically to break down.

I hasten to add that none of the foregoing admonitions apply to the forthcoming Opening Festival at our splendid new National Arts Centre in Ottawa — which, as everybody knows, is easy to get to, well supplied with taxis, hotels, good restaurants next door in Hull, and the highest of high society.

As for Toronto — Per ardua ad astra!

31, Niagara-on-the-Lake, Ont.: The Doctor’s Dilemma, a double bill of Back to Methuselah (Part I) and Musical Mems, and Molnar’s The Guardsman. 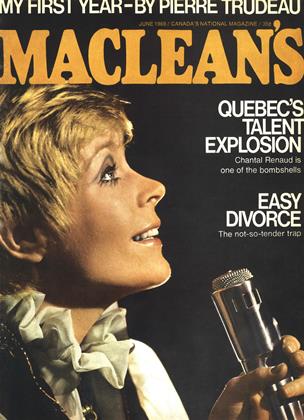