A GROUPER IS A SLOW, lazy tropical fish that can grow half

as large as a man and bears a startling resemblance to Charles Laughton. It has sad, droopy eyes, a pouting mouth and a body striped in beige and darker brown. There is a particular grouper named Duke who, for the past four years or so, has hung around a sunken landing barge 70 feet below the surface of the turquoise water off the east coast of Andros Island in the Bahamas. Duke likes tourists because they feed him. One morning a few weeks ago he drifted over to within three inches of my face, opened his mouth in W0mlooked like a delicate belch,

and then wafted himself out of my «field of vision. I could see every scale and indentation on his body wj,th a delicious clarity, since the waters réfraction gave my eyes '■^the power of magnification. And it was then that I fully experienced the^OH^effPent, the rapture alof the underwater world. Astronauts must feel like this sometimes: most of their time is taken up with the procedures and the technology involved in space survival. But there must be moments, I suspect, when they are suddenly struck by the sheer, majestic wonderment of knowing

where they are and what they are doing.

There is a queer correspondence between the astronaut’s weightless world and the scubadiver’s underwater environment, Like the explorers in 2001: A Space Odyssey, the diver moves with the sort of effortless grace you associate with the absence of gravity. It’s a soundless world, too, except for the throaty hiss of your indrawn breath and the slow, musical zzzzinnnggg you hear back of your ears as your exhaled bubbles stream upward to join the ocean of air you’ve left behind, If you’re lucky enough to be diving on a coral reef, it’s also a

Drifting among these fantastic shapes, scarcely acknowledging your presence, are the fish. Suddenly you realize that a world of concrete buildings, grey skies and soggy city grass had made you forget what color looks like. Angelfish drift by clothed in a black that is deeper than satin, and trimmed with iridescent blue. The sharksuckers wear white-on-white, shading into an impossible milky yellow. You don't manufacture colors like these and sell them in a can, for these fish are like flowers or floating jewels.

For experienced divers, these are the commonplaces of the underwater landscape. But for me, it was a demonstration of the fact that diving, once an activity reserved for the brave, the foolhardy and the rich, has become as accessible as skiing or sailing — and the number of scuba divers is increasing almost as fast.

In Canada, the Association of Canadian Underwater Councils, a federation representing most diving clubs, claims 6,000 members across the country. But association president George Burt estimates that for every member who attends meetings or bothers to fill out a membership card, there are 15 divers who don’t. Which means there are probably 90,000 Canadians who have experienced the unique delights of strapping a tank on their backs and pretending that they’re fish.

This isn’t merely evidence of yet another fast-growing sport. It also signifies the emergence of something totally new in the history of human perceptions. As long as there have been men and oceans, the world beneath the waves has been as remote and mysteri-

ous as outer space. Now it’s available to practically anyone who can swim and remember to breathe. It wouldn't surprise me if man’s exposure to the underseas world has as many cultural side effects as the widespread use of hallucinogens. Both of them are trips.

If you want to become a scuba diver, nearly every Canadian city with a nearby shoreline has diving clubs that, as a condition of their membership in the Underwater Council, offer instruction to beginners. It takes about 18 weeks of once-a-week instruction in a swimming pool before you’re able to pass a fairly stringent series of tests and are certified as qualified to dive. I took a faster route, however, for my underwater trip. I spent a week in the Bahamas, at a Canadian-owned resort lodge that regards scuba diving as its main raison d'être. In that week, diving under expert supervision on the world’s secondlargest coral reef (after Australia’s), I managed to experience more of the underwater world than many beginning divers get to see in a year of weekends.

The resort is called Small Flope Bay Lodge. It’s run by a Canadian named Dick Birch, who, nine years ago, sold his men’s-wear business in Hamilton, persuaded a few friends to help him buy land on the east coast of Andros, the biggest Bahamian island, and then built, along with an enviably escapist lifestyle for himself, a resort complex that has become a mecca for divers from Ontario and Quebec.

This is partly because Birch is a fanatic diver himself. He once deepdived 462 feet, an unofficial world’s record, but doesn’t like talking about it on the grounds that, on sober re-

flection, he thinks it was a damned-fool thing to have attempted.

The other reason is that Andros reef, all 100-odd miles of it, is probably one of the best diving spots in the world. The sea is warm and dead calm most of the time (although an unseasonable wind blew up an inconvenient chop for most of the week I spent there). The visibility is fantastic — up to 150 feet under optimum conditions.

The reef has several peculiarities: it’s dotted with “blue holes,” mysterious undersea caverns that apparently burrow inland, because they suck down salt water at low tide, and belch out brackish water at high tide. A Florida biologist named Dr. Manson Valentine has also discovered a number of submerged structures on the reef, including what looks like a stone highway half a mile long, which he says are artifacts of Atlantis.

Best of all, for seasoned divers, is the fact that the Andros reef, after sloping eastward to a depth of 165 feet, suddenly drops off, like a submerged Grand Canyon, into 6,000 feet of ocean. Diving on the edge of this immense submerged cliff is called, in Andros parlance, going “over the wall.” It is here that some of the world’s deepest scuba dives have been made. Divers who have stood on the canyon’s brink say it’s a weird experience to peer over the edge into the abyss below. Some of them actually experience vertigo, as though they were back on land and in danger of falling over.

Before I could experience any of this, however, I had to learn to dive, which in Andros is not the same thing as becoming an expert diver. Dick

Birch and the three dive-masters he employs as underwater guides stress that the instruction they give will equip you to dive under close supervision on Andros reef; but it doesn’t necessarily mean you’re qualified to dive anywhere else.

First things first: still on dry land you familiarize yourself with the aqualung, which Jacques-Yves Cousteau and Emil Gagnan, shortly after World War II, adapted from the oxygen apparatus used by wartime pilots. Like a pilot, you learn to run an instrument check before leaving. Is there enough air in the tank? Check it with a pressure gauge. Is the main valve turned on? Check that, too. How about the reserve valve? This is a switch that releases the final 300 of the tank’s 2,150 pounds pressure of air; when it’s turned on, that’s your signal to start heading for the surface. Before you go into the water, you check to see that this switch is working properly.

Then, paddling around in four or five feet of water near a wharf, you learn to navigate with the tank on your back. On land, the tank feels as though it weighs a ton, but once you enter the water the buoyancy of your protective clothing and your own body make it necessary to wear a weight belt to counteract it.

Underwater at last, you learn some rudimentary safety procedures. Water occasionally seeps into your facemask, and you have to learn to clear it underwater by facing upward, pulling the bottom of the mask, a fraction of an inch away from your face, and vigorously blowing your nose. The heart of your equipment is the regulator — the

device that converts the super-pressurized air inside your tank into breathable doses —and you practise removing its mouthpiece and replacing it while underwater. Nobody should dive alone, so you also learn “buddy breathing” — two divers sharing a single tank by passing the regulator mouthpiece back and forth between breaths.

Finally, you memorize the underwater signals. A thumb and forefinger held together mean everything’s okay. A finger drawn across the throat means it's time to go on reserve air: you flip the switch, but always remember to tell your diving partner so that someone else knows when you’re running short. A finger pointed at the mouth means: “I need air.” You also learn the most ominous signal of all: two fingers held up in a “V” mean there’s a shark in the vicinity. This, needless to say, is your signal to get the hell out of the water as fast as possible.

My last dive was the deepest: 70 feet down to a war-surplus landing barge that Dick Birch bought for a dollar and then sank close to the edge of the wall. Peering from the surface down through the blue-green water, it seems an enormous distance to the bottom — as deep as a five-story building is high. To get there, you simply point your head downward and gently kick your flippers.

As you descend, the pressure increases. You hold your nose and blow

to equalize the pressure inside your ears. Halfway down, drifting on my back to clear my facemask, I could see the bottom of the dive boat high above me. It looked as though it was hovering there, like a flying saucer. Then I got some water up my nose — and experienced a flash of panic as I realized that, on this dive, I couldn’t simply stick my head above water and take a breath. I fought down the feeling and concentrated on taking deep, even breaths. You learn to love that regulator. If, as some Freudians assert, diving is a symbolic return to the womb, then the regulator is your umbilical cord — the slender thread that connects you to the ocean of air above and a constant reminder that, for all the amniotic ease of your movement in this underwater world, you’re a stranger in someone else’s environment.

Finally, I reached the bottom, settling like a bird on the coral bottom beside the barge. The four of us stood in a tight circle down there, like acquaintances who’ve met on a street corner, while Paul Kelsey fed Duke, the grouper, pieces of conch meat out of a tin can.

That’s when I nearly flipped: the sheer normality of it, standing around down there, communing face to face with the sort of fish you seldom encounter except on the end of a hook, the environment that keeps you alive strapped in a capsule on your back. It was miraculous and beautiful, an unforgettable trip that has been denied to all previous generations of mankind, and now is available even to amateurs like me. I’ve been there and now I’m back. I want to return. □ 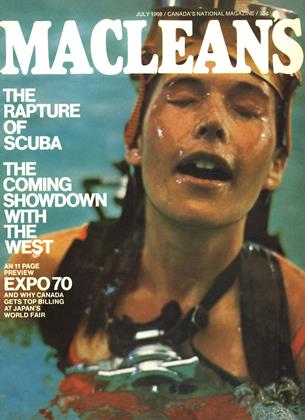