AUBURN RINGLETS curling over her ears, pink dress fashionably high above shapely knees, she pours drinks in her bachelor apartment and talks about scuba diving, flying lessons, and her secretarial job in a Toronto hospital. It’s hard to believe that pretty May

McGovern was recently Sister Mary, a postulant in a Toronto Roman Catholic convent.

Even after less than a year in convent and with previous working experience, her return to secular life was difficult: little money, no clothes, prospective employers who deemed convent girls “too emotional” for jobs. For long-time Canadian nuns, priests and Protestant clergy, now dropping out by scores, the transition can be agonizing. As a sparetime, volunteer secretary in the Toronto office of nondenominational Bearings - for - Reestablishment, May McGovern helps other dropouts back to “civilian” life.

In two and a half years Bearings’ 12 U.S. offices have helped 3,000 former clerics. In Toronto since February, 60 Catholics and 15 Anglican, Presbyterian and United Church ministers have come from across Canada and abroad to Bearings’ tiny room, donated by the Anglican Church and manned by unpaid volunteers.

Mostly in their 30s and 40s, the dropouts feel unfulfilled and frustrated by the clergy’s declining influences and the churches’ outdated rules (nearly all the Catholics want to marry) or senseless regimentation. “I was treated like a child,” says a former curate. “I even needed permission to restock the Coke machine.” “I was sent to bed at a quarter to nine,” says May McGovern. “I could have spent those wasted evenings in volunteer churchwork, as I often do now.”

Bearings won’t help make their decision to drop out but when it’s made, the eight-member board (businessmen, teachers, past and present clergy) helps ease the pain of readjustment. Many are nagged by personal guilt, reproachful parents or the church itself. One convent billed an ex-nun $1,837.50 for six years’ room and board (she refused to pay). Another was refunded her full $500 dowry only after Bearings intervened.

Priests and nuns, in particular, are as bewildered as ex-prisoners. Bearings finds rooms in private homes until they can cope with landlords and rental deposits; puts the emotional brakes on lonely girls (“How do I find a man and get married?” was one exnun’s first question); locates free dental service; explains the mysteries of money. “Financial experience?” responded one girl. “Oh yes, I added up the money in the poor box every month!”

Helped by Bearings’ volunteer board chairman Paul Harris, an information officer with the Department of Manpower, many get jobs as nurses or social workers. One ex-priest is studying law. Another teaches philosophy

“This is part of a renewal of the church,” believes former priest Ken Dietrich, now an Ontario government social worker. “Within 10 years the churches will be asking us to share our hopes and aspirations with the community. Presently, we are a kind of Christian underground.”

Some resentful churchmen think Bearings is an underground railway, aimed at destroying the church. When it canvassed 71 bishops for desperately needed donations, only three responded with a total of $65. Bearings, in turn, says it’s only doing what the churches should have done long ago: responding to a human need. “If Christ were here today,” says May McGovern, “I think He’d approve of our work.” ROBERT COLLINS 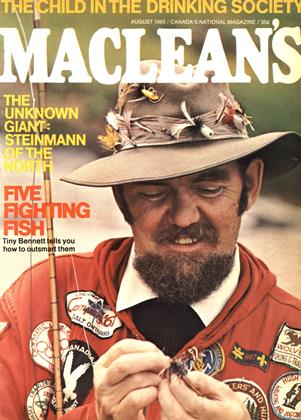