Pornography: the blind eye and the deaf ear September 1 1969

It is not the purpose here to pass judgment on these developments; either to condone or to criticize. It is rather to point out that once again Canadian politicians, faced with a sticky and burgeoning social problem, are doing what they usually do; turning a blind eye and a deaf ear on it. When Canada is faced with a difficult social issue, awkward of solution and politically hazardous, our politicians more often than not pretend it isn’t there in the hope it will go away. We have a long record of coppingout or foot-dragging when changes in legislation have been required dealing with such touchy issues as divorce, abortion, homosexuality and liquor. Currently we are doing the same on marijuana, amphetamines, cigarette advertising and pollution. Now, confronted by the pornography explosion, the federal Justice Department and the provincial Attorneys General are taking the same gutless and hypocritical path. In short, they are doing virtually nothing.

And what should they be doing? First, recognizing that the problem is here and growing. Second, seeking to under-

stand the shape and dimensions of it. Third, coming to grips with it, unpalatable as that prospect may be. The governments of a number of European countries — notably Denmark — have done exactly that. In 1964 the Danish Minister of Justice called for re-examination of the criminal code as it is related to pornography and censorship. An official study by a council involving medical, legal, psychiatric and church experts was appointed. As the result of their study, in June 1967, by a vote of 159 to 13, Parliament repealed all prohibitions against written pornography. This June, by a vote of 147 to 24, Parliament abolished film censorship and legalized the sale of pictorial pornography to anyone over 16. Danes report that since the law was changed the sale of pornographic books is down and, comparing the last half of 1966 to the last half of 1967, sex crimes in Copenhagen are down 34 percent.

There are those who challenge the claims made for Denmark’s solution. It is argued that the decline in the number of sex crimes is the result of changes in reporting such crimes. Others argue that printed pornography has dropped in sales because of the increase in pictorial pornography in magazines and films. The point is: let’s find out. Let us, at least, mount a study of the subject by (a) setting up a committee of doctors, lawyers, psychiatrists, sociologists and churchmen to examine the question and report on their findings and (b) make a thorough and objective study of the Denmark experience. Having done these two things we will then know the nature of the problem and have the information on which to come to informed conclusions. As things are now, the buck is being passed back and forth by federal and provincial authorities, customs officials, judges and police. And when the film I Am Curious (Yellow) and the road company of O Calcutta come to Canada (and they soon will) we will suddenly find ourselves caught up in a raucous brouhaha and precipitated into either mindless permissiveness or ugly reaction.

Let our politicians realize that the blind eye and deaf ear approach won’t work and that the torrent, now approaching flood, won’t go away. 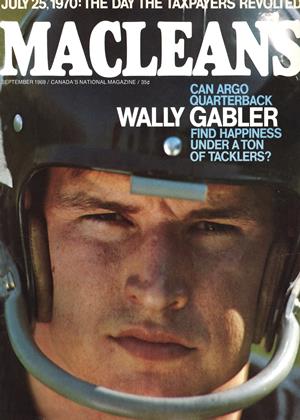