RE YOUR Canada Report on poverty and welfare (1 Canadian In 5 Is Poor, Mad — And Getting Madder): Natural resources are the common property of all men, and every Canadian is entitled to an opportunity to receive 1/20 millionth of the Gross National Product. For those unable to. find work or who cannot work, provision must be made to have an equal share in the fruits of production. Until those in control of economic development so plan their efforts with the whole community in mind, and until the high-income earners voluntarily turn back into the economy everything they earn above an equal share of the GNP, I do not see the problem of poverty being solved. It seems to be largely among the young that any such rejection of materialism is taking place, but, unfortunately, a lot of these are “dropping out,” with the result that those of the next generation who will be eventually in places of economic power may simply imitate the materialism of their fathers. - MAURICE G. ALLEN, TORONTO

* Your Victoria article gives a clear impression that social workers are a callous and punitive group of people. This impression is not correct. As mentioned by Alex Davidson, Administrator of Victoria City Welfare: “ . . . Punitive, abusive action by social workers certainly exists in isolated cases ...” Such behavior is not accepted by members of the British Columbia Association of Social Workers. The local branch of our association is investigating the statements that persons consider they have received improper service and will make every effort to assure that such action, where it exists, does not continue. — A. W. RIPPON,

* In your excellent article you stated incorrectly that I was threatening to burn down houses and that I was in favor of violence against “things.” Like many responsible citizens, I have stated that violence by the poor and supporters of the poor will come, because the poor have exhausted the nonviolent means of getting their situation changed. But I am against such violence. I have advocated civil disobedience of a nonviolent nature, such as sleeping in the legislature overnight or installing a family in the provincial museum to live. I have suggested also that symbolic violence against “things” may prevent the violence that is inevitable when our university students finally take the problems of the poor seriously. Such symbolic violence might take the form of stamping on a small public flower bed. Our Low Income Group is considering the use of such symbolic violence to dramatize the damage done to children in poverty. R. L. CLARKSON, EXECUTIVE SECRETARY, VICTORIA LOW INCOME GROUP

son told me in Victoria that he was going to try to get university students to burn down some of the worst of the incredibly bad houses that welfare people are put into, as a symbolic act. Then, according to my notes, he added the words quoted in our story: ‘The next step has to be violence against things.’ ”

Ups and downs of phonies & snobs

What with the phonies and snobs who spot the ski slopes like acne, the exploiters who are making the mountains as ugly and congested as the lakes, the built-in obsolescence of costly gear and the general reworking of a sport into a fetish, I'll take a walk in the woods — if I can find any — for my exercise. Marjorie Harris's article on skiing as a successor to bowling (1970: Jump-off Year For The Skiing Million) accurately, if inadvertently, makes the latest “now” cult sound as much fun as sorting prison laundry. So it’s “de rigueur to kick back” while pushing your way to the lift, is it? I’d rather roll a boulder up Mont Ste. Anne than ski down it.

It was interesting that articles about Paddy Donovan (The Violent Death Of Paddy Donovan) and hockey’s Derek Sanderson (The Dead-End Kid Who Wants To Be A Superstar) should appear in the same issue. They showed the difference between a sincere person who doesn’t give a damn about plastic society, and someone who doesn’t give a damn about anybody except himself. It made me wonder if I’m going the right way, and how I’m going to get there. Being real doesn’t seem to help.

women, of his disregard for the rules of his profession and of his foppery in dress. Such articles help to break down the moral standards of our youth by glorifying the dubious excesses of their heroes.

* Any professional hockey player who brags about his fights and his sex fun the night before a game, is not much of an idol for young Canadians to worship.

* Portraying Sanderson as hockey’s version of Joe Namath was an insult to Joe and to football. You are trying to make Sanderson into something he isn’t. It’s obvious Sanderson is copying Namath’s image in hopes of getting some publicity.

T Such drivel. Who cares about Sanderson’s “Ponderosa sideburns,” “Mod Squad wardrobe,” “six-stool bar,” much less about his playmates?

* Sanderson calls his girls “broads.” Any girl who would let a man call her a “broad” has plenty of class — all low.

* Sanderson was slightly roughed up after a Memorial Cup game in Edmonton, during which Sanderson and Bob Falkenberg had a fight. But Sanderson was roughed up by two men, not six, as your article claims. And Falkenberg did not “pester” Sanderson into the fight. When Falkenberg was carried off the ice, he still had his gloves on, which indicated he was jumped and did not have an opportunity to fight back. You also failed to mention that Sanderson was given a match penalty, was subsequently sus-

pended by the CAHA and did not play any further games that season.

* Please do not subject us to accounts of the private lives of our hockey stars if this is to be one of those stars our young sons are to admire and emulate.

* Now that we know everything about the “Cocksure Mr. Sanderson,” do you really think the article could have been of any real interest to anyone other than “dear” Derek? Can he really think he’s so great, or is he just talking to convince himself? Sanderson may be big on the ice, but anywhere else ... ? We wonder! - PATTY

Douglas Marshall refers to the mutilation of the original BBC-TV portrait, Royal Family, that CBC-TV presented to Canadian viewers (Television, October). I had had a build-up about the show from my daughter, who had seen it in England. Thus I was surprised and disappointed at what the CBC provided — things I’d been told to look for were missing. What also bothered us was that heavy noise blanked out so much of the dialogue.

* I learned nothing from the Royal Family telecast except how utterly stupid we Canadians can be by allowing ourselves to contribute financially to the outdated extravagance and useless trappings of the monarchy.

* Having just read Douglas Marshall’s Television column in the November edition (No Wonder Canadian TV Is Mediocre . . .), I am surprised that he sees any point in watching Canadian television. Why does he not move out of the country to see “good” television if he feels there isn’t any in Canada? As for the Royal Family special, I feel Canadians got about as much of that as anyone should have to stomach!

* Marshall’s criticism of the CBC for its failure to provide the best for Canadians is absolutely true. I live in the northern part of northwestern Ontario. TV reception from Toronto is perfect — but a person has to have a cast-iron stomach to watch CBC.

In her criticism of the views of New Feminist Bonnie Kreps (Talkback), Mrs. Lloyd Thomas states: “Is it a man’s world really? Even as a child the female has the advantages.” How is this world a woman’s world? What advantages? Perhaps Mrs. Thomas is unaware that not all women are taken care

of comfortably, protected and sheltered in suburbia. If many of us must, or wish to, compete in the job market, we should demand a decent start in life and that the government enforces, where possible, equal wage for equal work. I do not agree with the New Feminists, who seem to point at men as their principal “enemy.” I say woman’s enemy is another woman: a woman is more likely to get a fair deal from a man than from another woman. Who is the female anti-feminist? She is the dependent woman who fears her emancipated counterpart as competition for her husband’s job, and as a threat to her secure, sheltered and comfortable existence.

The 30 Men Trudeau Trusts, by Walter Stewart, was enlightening. To me the part that was most of interest dealt with those disciplines or areas of intellectual and business activities that were left out. I found no scientist among the entire group, and no one concerned with the environment. It seems to me that technology, and problems of technology and environmental quality, are among the most important that a prime minister must face up to. Such people should be part of the entourage.

No pay for ‘Paddy’

We have discovered that some people actually believe we were paid for the article on our son Paddy (The Violent Death Of Paddy Donovan). We couldn’t conceive of such a thing. If money had been offered, we would never have spoken to your writer, Alan Edmonds. Only because we loved our son so much and knew him only as a good, kind boy for 18 years did we even consider talking to Mr. Edmonds. We think his article showed our feelings and that Paddy was truly an unusual person. We miss him terribly.

Re your article, Supermother: I’m making a survey on me, the sometimes - sexy wife and sometimes supermother who sometimes compulsively shops in sometimes-fashionable clothes — and the results are: I’m quite survey sick. With two daughters, aged \3A and 23A years, your Supermother has hardly reached the difficult ages of childrearing. Life won’t be all making cookies in the kitchen together by midwinter 1971, when both children will have outgrown afternoon naps. As a mother who tries her best, I say my children are enjoyable sometimes, but on the bad days when I’m through tearing my hair out and decide to relax for 10 minutes with Maclean's and a “cuppa,” see that I don’t get a survey to read that includes me, because as a human mother of three children under six, I can only be a “sometimes anything.” And from my friends’ talk it would appear that they really aren’t any more super. 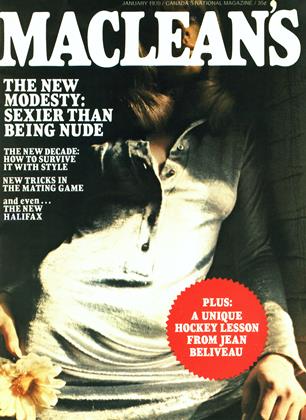