OK, Lois Lane-Go Get The Dope On The Boys On The Bench Cathy Wismer October 1 1970

THE THING THAT most fascinates me — and, I suspect, a lot of other women football fans — is not so much the game itself (I never really know what happened until my date tells me on the way home) but the utter, arrogant, challenging, masculinity of the bench. The players’ bench. One of North America’s last inviolate preserves For Men Only. Last fall I invaded that preserve. I went to a Toronto-Saskatchewan game, wearing my second-best mini, armed with a camera and press card.

A fat man in a navy-blue coat stood at the gate, his belly hanging over his belt. I watched him for a while. Everyone who passed through the turnstile had a blue press card to show him. I dug into my pocket and pulled out mine. It was blue.

The fat man didn’t notice me — not until I was standing right under his belt. His brows narrowed and he spoke, almost oolitely.

“I've never let a woman in before and I

don’t intend to start with you,” he bellowed, wiping away a trace of yellow from his face. That was enough. No fat man with mustard on his lip was going to spoil my chances of sitting on the Argonaut bench. I pushed past, flaying a press card in his face and strode on to the field with as much satisfaction — I imagine — as the suffragette who got her first vote.

The sideline was a long stretch of mud. Men photographers in army-green trench coats sauntered past me, cameras swinging from their necks. In the centre, three camel-coated officials puffed on fat cigars and nodded approvingly to coaches. Wiry little men in white runners and blue wind-

breakers darted about, running water buckets to one end of the bench and towels to the other.

It was still drizzling when the players ran on to the field. A roar of screams and yells and honking horns broke out and rolled across the stands. I turned around. Millions of people seemed to be stacked in the sky, wedged together in a collage of newspaper hats, green-plastic bags and umbrellas. Another roar. The game was on. 1 felt very alone, standing there in my mini. Men kept their distances, walking around me as they would a pothole in the sidewalk. But before I could turn and run a young bearded photographer (who called himself Eddie) yelled, “Hey, girlie, watch out.” I stepped aside, just missing a rolling onslaught of three players as they shot across the mud.

Bearded Eddie took me under his wing in that protective male manner that exists (thank God!) even when a woman is trying to prove it unnecessary. For the first quarter, I moved along the field with him, covering the plays. It seemed to be the professional way of doing things. We’d all squat on the grass — up and down, up and down for every play of the game. (Not the easiest thing to do in a mini!) A man in a red duffle coat joined our group, but each time I turned around I’d find his camera in my face. I finally asked him what he thought he was doing. From his reply, I gather it was the novelty of it all.

At half time, Bearded Eddie disappeared into the crowd to get a coffee. He never came back. I pulled out my brown bag of film and reloaded the camera. The players were soon back from the dressing room and it was time to rejoin the bench. I wandered over to one of the little water boys in white runners. He was standing on the sideline with his arm wrapped around Number 66, comforting him. Number 66

was a big man. His wrists were bound in thick, white tape wrapped so tightly that, his fingers bulged like balloons from the knuckles. He didn’t seem to mind the little guy at his waist. (I’d never really thought of football players as affectionate. But

they never seemed to miss a hug or a slap on the backside at the bench. In fact, they were doing things I’m sure they’d never do in a jacket and tie.)

The other players were now crowding the field, shouting and shaking their arms.

I couldn’t see the field over their padded figures, so I walked to the bench. A beefy Number 64 sat at the end, staring through a maze of metal that looked like a muzzle for a mad dog. Not a faceguard.

(But when he smiled, he had teeth.) Steam poured from his face, his red hands were stuffed up the inside of a blue sweater. Suddenly he got up and ran on to the field with the others. Another group charged off. Number 75, his blond hair curling from under his helmet, lunged toward the bench, pushing me into the arms

of Number 57. 75 was very polite about it, excusing himself immediately.

57 showed a little more interest. “What the hell is a girl like you doing in a place like this?” Flattered, I adjusted my hair and was about to explain when the whistle blew and he went back to the field.

never used a handkerchief to blow their noses. Now and then, I’d catch the eye of a player staring out the corner of his helmet. It was the same look my brother gave me when I announced I was going to join his tree-hut club when I was 12.

By the fourth quarter I was sitting on the bench. It was a quiet quarter. The players weren’t saying too much, even though they were winning. (I heard Number 59 tell them to cut out the language.)

In a wave of guilt, I almost wished Bearded Eddie was back, shuttling me up and down the sideline.

Next day at work, I had a call from the Argonaut office. The voice on the other end was stern. “We can’t have women like you down on the field. It’s upsetting to the players. The fans can’t concentrate and the photographers miss the game, wondering what you are doing.” Click.

The following week, I went to the game anyway, but this time I left my mini at home. Instead, I wore a pea-green army shirt, knotted at the top with a blue-wool tie. My hair was bunched tightly out of sight under a plaid motoring cap. A pipe poked from the side of my mouth, blowing smoke into the face of the fat man at the gate. He didn’t pay any attention.

I strode on to the field, bouncing along like a young boy, hands stuck in my pockets and camera swinging from my neck. I joined the photographers moving up and down the field. I stopped once to reload my camera. As I was bending over, I noticed a familiar shadow join mine on the ground in front. Sure enough — there was the peaked cap, pistol and policeman.

“What are you doing down here? Where’s your pass?”

I couldn’t give up the game now. I fumbled in my father’s jacket pocket for the blue card. It seemed miles out of reach (Dad’s six-foot-four). When I found it, I shoved it into his hand. He handed it back, his eyes slightly colder and less curious. I guess he thought he’d seen my kind before.

I went back to the bench. It was louder this time. I saw the water boy in white runners and wondered if he recognized me. The players obviously didn’t. It was like being in the midst of a pack of buffaloes, with everyone snorting and huffing and cleaning their cleats from mud and grass. The smell of sweat and Absorbine Junior hung in the air. The language was as strong as the smell.

“For Chrissakes, get that ball.”

I blushed, absurdly. I'd heard those words before, but only as the new female — a liberated one entertaining a so-called “sophistication.” Never disguised as a man in male company! Suddenly, I wanted to tear my hat off and yell, “Hey, you boors, there’s a woman around here." Instead, I was laced in the face with a wet towel from the belt of a player charging off the field. By the time the game was over I was bruised and deflated with no idea of what the score was or who was playing.

My final confrontation with the bench was at the Grey Cup game in Montreal. As always, the French showed their great charm and understanding of women. “Oui, mademoiselle, you may have a card to photograph the game.”

I arrived at the large, marble entrance to the Château Champlain, a battered suitcase in one hand and a camera in the other — alone to face the bash-’em-downbooze-’em-up weekend of Grey Cup.

But it wasn’t until the following morning that I really learned what Grey Cup was all about. I awoke at six, my stomach rumbling and churning the scotches, wine and liqueurs from the night before. By 12:30 I’d recovered enough to want a steak and egg sandwich. The front hall was buzzing. Men strode around in the raccoons they’d worn the day before. Some of them were getting into taxis. Then came the sudden, great realization — the game was not at two but one.

I arrived at the south entrance of the stadium, two minutes before the kickoff. The game was much the same as the others but for the added presence of a middle-aged man wrapped in a crocheted cap and scarf, with a red carnation behind his left ear. At half time, he walked by me, chewing gum and smiling. When he

saw my camera, he let me take a picture, stepped a little closer and said, “Boo.”

The game ended with Ottawa the winners. I walked out of the stadium slowly, one of the last to leave. Maybe I’ll never see another football game from the bench but i still hold the honor of being the only girl-photographer, ever, to be booed by Pierre Elliott Trudeau. □ 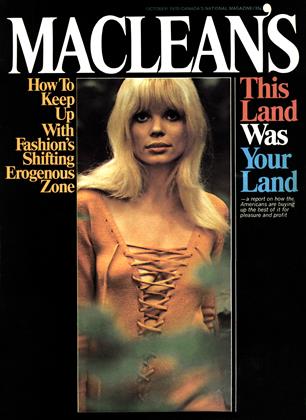