Provincehood for the Northwest Territories? Yes, says Indian Affairs and Northern Development Minister Jean Chrétien, some day ... when the North can pay its own way WALTER STEWART November 1 1970

“How LONG ARE you going to keep these people waiting?” I wanted to know. “When will the Northwest Territories become a province?”

Jean Chrétien, Minister of Indian Affairs and Northern Development, rolled his chair forward, plucked a paper clip from his desk top and glanced around the room, taking in the familiar Eskimo art, the comforting broad-loom, the impressive piles of government documents. This is the heart of his kingdom, the nerve centre of northern policy, the place where decisions are made. It’s a long way, I couldn’t help thinking, from Fort Rae. The minister’s office occupies one snug corner of the fifteenth floor Ceritennial Tower, in downtown Ottawa. Here, tli,e struggles at Trout Lake or Tuktoyaktuk seem quaint — it cost more to furnish the minister’s office than to buy the Trout Lake fishing lodge.

Chrétien bent his paper clip back and forth, stuck it between his teeth, pulled it out, snapped it apart, threw it down. Silence hung between us, a tugging force, and then he said, choosing his words as if he were plucking them, like flowers, “The Territories will become a prov-

ince when it has the population and the economy — the stable economy — to support provincial status.”

In 90 minutes of prodding I could push him no further than that. He would not say what population or what revenue would suffice, he would not guess when they might be reached, and he rejected the notion that because other provinces were formed with smaller populations and fewer resources, the North should be given the same chance.

“When you lbok today at the Prairie provinces, when you look at the Maritimes, were they such clever decisions? A lot of people think there should be one Prairie province, one Maritime province. Well, if that was a mistake, should we repeat the mistake, just because of tradition?”

Nor would he concede that northern resources belong to northerners. “They belong to Canada. We pay 85% of the costs up there, not for one group of people, but for all of Canada.” (This year, the Territorial Council will spend $76 million, of which $70 million will come from Ottawa — resource revenues will bring in five million dollars. But resource development will cost seven million dollars.)

Resource control is the crux of Chrétien’s argument. Selfhelp projects among the natives — such as that at Trout Lake — are valuable, Chrétien said, but the real future for northerners of all races lies in the untapped oil and untouched minerals. That means a continuing collision of southern and native cultures. “It is too bad, perhaps, but it has already happened. We cannot walk away. The Eskimo is not going to go back to being a happy hunter — that’s just a romantic dream.” And the kind of resource development Chrétien sees demands know-how and capital from the south. They will be provided, but on southern terms. When the Eskimos of Sachs Harbor became alarmed because oil exploration threatened their fox hunting, Chrétien flew north, not to call off the oilmen, but to assure the natives that the exploration would not drive out the foxes.

“Why should you make that decision?” I asked.

“Because I pay the bills.” “But Prince Edward Island doesn’t pay its way, and you can’t tell them what to do.” “I ask you again, does that make sense? If we made a mistake before, should we make it again? We have seen how badly resource development was bungled in the south. We are not going to let it happen in the North.” In short, the North will tiptoe to provincehood, with the federal government ever at its elbow. The first small steps are being taken today at Tuk and Trout Lake, at Fort Rae and Yellowknife. Soon, Chrétien hopes, the stride will lengthen, and someday the Territories will be ready to run on its own. But not until the federal government is satisfied it has the men and the muscle to manage its own resources.

When will that be? The minister doesn’t know, and at the moment he is in no hurry to find out. 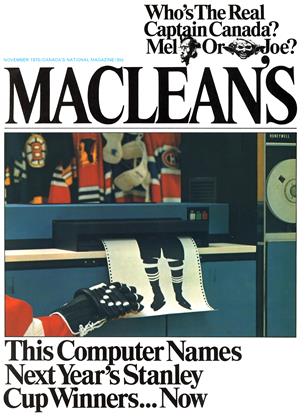