WHAT IS THERE about making playthings for kiddies that brings out the combatant in a man? Among Canadian toy makers this fall the talk was all of national defense (“So how can a little country beat off the Barbie doll?”); propaganda (“Kiddies today are brainwashed by Kerplunk commercials”); the space race (“Listen. It’s dead. You can’t move a Moon Saucer”); armaments (“They go in cycles: jungle, war, secret agent”); aggression (“We’re clobbering the opposition with this little item”); secret weapons (“There are certain materials that will replace plastisol”); and espionage (“Who took the Sabre-Line truck chassis? It was not Superman flying in through the window”).

Much though not all of the talk emanated from 50-year-old Reliable Toy Co. Ltd. in Toronto’s Cabbagetown where mighty machines oozed Elephant Safari Guns and formidable ladies in babushkas wielded ball peen hammers on Chaplinesque assembly lines. The eye of this storm was a coolly elegant office belonging to the toy king of Canada (so proclaimed in Reliable press releases), the Peck’s Bad Boy of the industry (self-admitted), the president of Canada’s oldest toy firm (undisputed), E. Mannie Grossman. Handsome, superbly tailored, a trifle under life size as befits the manufacturer of 35-inch Ski-Mobiles, Grossman resembles a favorite uncle — except in his business stratagems, when he is no more avuncular than a Doberman pinscher.

“Mannie is a misguided fellow, a publicity hound who unfortunately has to shoot his mouth off,” says one major competitor. Unfortunately for the competition, that is. Seen as a sort of anti-Santa by the trade, Grossman can do no wrong with the press. What could be more appealing on a dull day, for example, than charges of industrial espionage implicating the makers of teddy bears and cap guns?

“I believe Reliable Toy and any other responsible toy manufacturers should no longer cover up the sneaky and outright criminal acts of a minority in the misguided notion that we are protecting the good name of the industry,” announced Grossman with the portentous air of a man who had made a difficult but ethical decision. (This was at the annual Toy Fair in Montreal where chain stores and jobbers do most of their buying for the Christmas market.) The theft of eight handmade patterns for new Reliable dolls, he continued, was an obvious “inside job” that pointed up “back-alley morals” in the business. “There are those who believe that I shouldn’t have rocked the boat, that the public would never have known, and that it’s done in the biggest of industries. As if that makes it right!”

The immediate reaction from Grossman’s peers was silence: making light of his charges would suggest only that they themselves had nothing worth stealing. More recently S. Macdonald Irwin, executive vice-president of arch-rival Irwin Toy Ltd., dismissed the outburst as an example of Grossman’s compulsion to “say something dramatic . . . Indus-

trial espionage in the toy business is a myth. We’ve never had anything stolen. We know what the competition is doing and they know what we’re doing. We should act like grown-ups, not like the Hardy Boys.”

But the vice-president and managing director of Mattel Canada Ltd., Ross Amerie, had reason to believe that some of his new toys had been stolen, though whether on behalf of competitors he could not say. And a Mattel electric car had disappeared recently in Germany, leading Amerie to guess that the firm would “have competition for that item next year.” Mattel’s new Toronto plant has electronically controlled exits, random searches of staff, identification badges for visitors and — at certain times of year — virtually impenetrable engineering and product-development labs.

Reliable’s first apparent theft was a wooden pattern of the Sabre-Line truck chassis — “right out of the chief engineer’s office,” says Grossman. “It set us back three months. It apparently was done to retard us from coming out. Anyway a copy never appeared on the market. Same with the dolls. We had the police and private detectives investigating. You could say we found a vulnerable employee, but we couldn’t pin anything on anybody. We tightened up our security. But it’s hard to stop leaks when you have up to 1,000 employees.”

It was the fact that Grossman managed to make promotional capital out of the thefts, rather than any besmirching of the industry’s good name, that so bugged his competitors. They were already upset over Reliable’s assumption of the title, Canada’s biggest toy maker. “Irwin Toy is the biggest,” says Mac Irwin. “We avoid saying so but in fact we are.” And Mattel’s Ross Amerie surprises nobody by ranking Mattel “clearly the largest.” A toy buyer at Eaton’s puts Irwin first, followed by Mattel and Montreal’s Eagle Toys Ltd., with Reliable a rather distant fourth. “But I’m guessing,” he says. And guessing it will remain, since none of the firms is prepared to release its sales volume. Under the circumstances Grossman’s guess is as good as anybody else’s.

There are 100-odd toy companies in Canada, an industry comprising many marginal and specialized family businesses dominated by a few giants, including U.S. - based conglomerates using imported molds and often distributing finished toys shipped in from the Orient and elsewhere. These subsidiaries are pained when Grossman asserts in a promotion campaign that competitors’ toys advertised on tele-

vision sell at inflated prices. (Irwin spends $1.6 million annually to plug its U.S.-developed toys, mostly on television; Reliable’s advertising budget is $50,000.) They are understandably upset when Grossman insists that they will “cease to exist” when and if Canadian protective tariffs fall. But at a time when the flow of products and ideas is overwhelmingly northward across the border, only Reliable has managed not only to flourish with Canadian designs (90% of its 1,300 toys) but also to license more than 40 of them to U.S. toy manufacturers.

The visibility of Mannie Grossman helps Reliable overcome the advantages enjoyed by the subsidiaries of U.S. toy companies. His competitors see and resent Grossman as a peculiarly strident walking toy commercial, but can scarcely deny that the firm needs one. For across the border flow, besides the latest U.S. toy molds to Canadian subsidiaries, the latest U.S. toy commercials to Canadian consumers. According to the Bureau of Broadcast Measurement, 42,000 Toronto-area youngsters between two and 11 were tuned to Toronto television stations on a recent Saturday morning during the so-called kiddie ghetto favored by toy manufacturers. At the same time 274,000 Toronto kids were watching stations in Buffalo. This enormously potent free advertising recurs at border cities across the country.

The native industry has also been hammered by low-volume imports from cheap-labor areas, especially Mexico and the Orient. Imports have killed the inflatable-toy business in Canada and dominate the small-toys market. “If we had to depend on small dolls we wouldn’t be in business,” says Frank Samuels, the president of Regal Toy Ltd., Reliable’s only major competitor as a source of Canadiandesigned toys. Samuels’ brother Ben, a Regal vice-president, adds with a fine cutting edge: “Mattel gets its Barbie dolls in the Orient for next to nothing and gimmicks them up, then pushes them on television at inflated prices. But we don’t make fiddly little piddly things like that. We make dolls.” (Mattel strenuously denies that its prices are inflated, and maintains that it manufactures more than half its products here.)

Although they share some views and resentments, Regal and Reliable manifest no backs-to-the-wall kinship. “Mannie Grossman figures if he rubs you the wrong way you’ll talk about him,” says Frank Samuels. “We’re not interested in doing business that way.” There are other differences. Frank Samuels launched Regal in 1959 after quitting Reliable, the family business, continued on page 60

over a dispute with a brother. He has contested claims that Alex Samuels, since deceased, founded and built up Canada’s oldest toy company. “1 founded Reliable in 1920,” he says. “I brought in my late brother in 1924.” Sons of the two men are executives at both firms, and the family is divided. Grossman, who joined Reliable at 16 in 1934 (he worked for other companies from 1951 to 1966) is not related to the Samuels family and will not comment on the dispute.

Outsiders believe that Frank Samuels’ great hope is to oust Reliable from its dominance of the market for Canadian-designed toys. “We’re both in the same kind of business,” Samuels admits, “and Regal’s getting a little closer all the time. We try harder.” One of Regal’s coups was to “knock off” (which means, in the toy trade, to modify an existing product enough to get around any patent laws) a pair of French dolls with genitals that Reliable had arranged to manufacture under license. Reliable dressed its dolls in semitransparent pants and called them Little Brother and Little Sister. Regal’s knock-offs, Baby Brother and Baby Sister, were more discreetly attired and endorsed by psychologists. “Reliable’s dolls were in poor taste,” says Samuels, “and they didn’t sell enough to fill a bucket.” (Grossman disagrees.)

Not even his worst enemies accuse Mannie Grossman of cynicism when, for example, he urges the stringent enforcement of a safety code among toy makers. Nor has his Canadianism ever been questioned. “I have had opportunities to join big American firms,” he says. “I wouldn’t. I consider myself a nationalist and a patriot.” There is, moreover, an endearing gusto about his nationalism, shown up in his desire to compete: “If it weren’t for the tariffs we would move into the States. I’d say we could possibly do twice or three times our current volume there.”

Reliable’s Manufacturing Committee Meeting convenes around a long table in the Decision Room. One week the most contentious decision involved the prototype of a Mickey Mouse Ring Toss whose head was wobbly. There was much wheeling back and forth of an imported pedal tractor. Mannie Grossman, the toy king, held up a competitor’s plastic sewing box high in the air while courtiers craned their necks to see. Then he let it fall. There was a splintering crash. “Ninety-eight-cent junk,” said Grossman, surveying the wreckage with satisfaction and sucking on a Cuban cigar. “Better merchandise than this we can always make.” □ 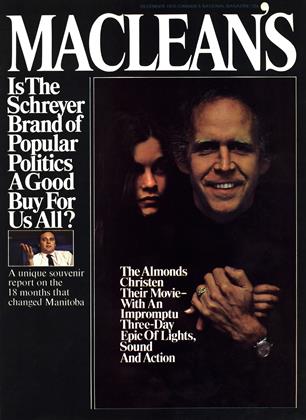