REPORTING THE NEWS is a weird business and the way the newspapers of Canada have been reporting the hearings of Keith Davey’s special Senate committee is a striking instance of this weirdness. Davey’s committee is examining who owns our newspapers, radio and television and how well they report the news. If you cared enough, you could by now have read hundreds of thousands of words of commentfree reportage of day-by-day testimony in your newspaper. But — this is the weird part — all those words would have given you no more than a murky picture of the social conflicts exposed in the hearings. One copiously reported session follows another, each rating approximately equal space. You, the consumer of news, receive little sense of an important Canadian happening. You get little incentive to care. This is a pity, because the Davey hearings aren’t just a concern of the “in” people of Canada’s communications business. What they are really about is power, and what any reporter who has followed the committee closely must now realize — although no one has said so very succinctly — is this: the owners of media can be as much a force in Canadians’ lives as the politicians they elect and the employers who meet their paycheques.

The first week was a mere overture. A subdued Davey ushered news executives to head-table seats in the Senate’s burgundy-carpeted Railway Committee

Room. Senators, briefed at two-week seminars in mediamanship, popped predictable questions. The executives gave their answers confidently, accepted their thanks and left smiling.

It was all very intimate and clubby, but perhaps deceptively so. For themes were germinating. Charles McElman, Liberal senator from New Brunswick, was writing a careful prelude to the big act. He put the same hypothetical question to every witness. He would postulate a region where the man who owned the only newspapers aiso owned television and radio stations, woods, pulpmills, refineries, shipping and

buslines and was the biggest employer in the area. In that situation, he would then ask, could the newspapers do a good job of reporting? Witnesses begged the question. Such a situation, they said, was outside their experience. And clearly the question pointed at K. C. Irving, whose five New Brunswick papers McElman had been dourly tracking for years.

The tone of the Davey hearings changed at 2.30 p.m. on Tuesday, December 16. Kenneth Colin Irving, proprietor of the Englishlanguage press of New Brunswick and principal if not controlling shareholder in the economy of the prov-

ince, sat beside Davey. McElman was notably subdued. This afternoon he would relinquish his persistent questioner’s role and would confine himself to dignified rebuttal. Spectators filled the room.

They looked at Irving — lean, iceberg-bald, agelessseeming at 70. He was about to make his first public statement about newspapers in 25 years of proprietorship. He opened with a level-voiced attack on Premier Louis Robichaud (for trying to destroy Fredericton publisher Michael Warded) and Robichaud’s former assistant, Senator Charles McElman (for threatening the license of Irving’s TV station). McElman denied the charges.

Irving answered goodhumoredly when Alberta Senator Harper Prowse raised the matter of motivation. Why did Irving buy newspapers? Radio stations? TV? It clearly wasn’t to provide a personal platform since Irving had declared “editorial policy is something I don’t know anything about.” It wasn’t to make money — stockmarket investment would yield more, faster. Well, then, why bother? Irving withdrew musingly behind the long granite mask of his face and one remembered that it was while writing about this sometimes inscrutable man that the late Ralph Allen quoted the reaction of a medieval cardinal to news of the death of his closest rival: “Dropped dead, eh? I wonder what his motive could have been.”

Then Irving surfaced with

the suggestion that his motive might be something only other New Brunswickers could understand. They had to build up their own resources. It might look queer to other parts of Canada that he drew no dividends from his media holdings, “but it’s the only way I know to get along and retain control over some part of our activity.” There are more things in heaven and New Brunswick, he implied, than are dreamed of in a senator’s philosophy. Though the motive for ownership was never explained, it was possible to build an interpretation from clues in Irving’s replies: Newspapers aren’t my interest, but the development of New Brunswick is. Owning newspapers is a protective■ insurance for that development. A critical press owned by outsiders could hurt me badly. But that is an interpretation only and Irving, a laconic witness, never confirmed it.

Questions about the quality of the New Brunswick press were handed to Ralph Costello, president since 1961 of Irving’s newspaper company. He charged that the biggest impediment to confidence in the papers was McElman and the “relentless drip-drip of his Chinese water - torture treatment.” True, Costello’s papers did not crusade against pollution of the St. John River, largely by Irving’s mills, but the rest of North America had been equally short -sighted. Why “single out” Saint John? Yes, his written brief claimed many newspapers achieved “a high degree of integrity and professionalism” under group ownership, but that was a general statement. Would he give examples? No. One example? No.

But the professionalism of the journalist was not the heart of this matter. The men at Davey’s head table were caught up in something larger and more primitive — in an unfathomable vendetta between those who courted

votes and those who bought up shares, a vendetta about a province’s resources and wealth. And incongruously, it was Fredericton’s Brigadier Warded — eyepatched, martial and British — who put it all in context. He did it by talking of logs. He recalled the days of popular zeal for the thousands of jobs Irving brought to his province: “They used to shout, ‘Hip, hip, hooray, those are Irving’s logs.’ ” While Warded told how political pressures had lost him printing and advertising revenues, the ferocity of a deep downeast rivalry was tangible in the room, as real as the logs in the St. John River. The Senate was hearing a blood feud. When he described how federal combines men raided his plant and home — “a gross, insupportable insult” — the hearing lost its context of ethics and press councils, of abstract things. It was about Irving’s logs, his deals and the economic power with which he matched the political muscle of Robichaud and McElman.

A major contemporary fact had received a rare exposure. Modern media are not the traditional and independent Fourth Estate, but an industry that often serves as an essential complement to conglomerate or regional power. This power coexists in a state of continuous and sometimes creative tension with a profession called journalism, which is progressively dedicated to delivering you the news.

Such a perspective can hardly be news to the Senate committee, which has $ 150,000 worth of studies into media ownership and operation, but it is a perspective that has not emerged from the “coverage.” And it might help you make sense of it all: The Davey inquiry is about more than the news. It is about power in the various regions of Canada. It is about logs. And all these are aspects of one very weird business. □ 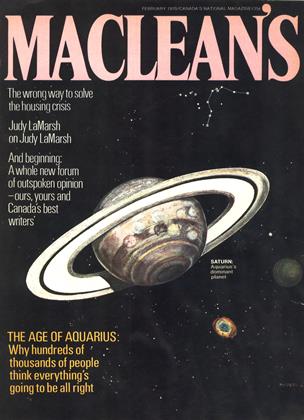