IN OUR VIEW - AND YOURS

Canada, too, does her bloody bit in Vietnam—

Father of Three awaits the Day of Judgment (p. 3p And Maclecmjf readers offer a piece of their mind

and the back of their hand on everything from the monarchy, to bug killers, to sexploitation

WHEN I READ ABOUT an American soldier firing a clip of tracer bullets into a group of women and children in some Mekong hamlet, I feel a quiet thrill of pride. The vivid description of a fighter-bomber snarling across the hills near Khe Sang, spraying napalm, sends a surge of patriotism coursing through my veins. An eyewitness account of bombs wrenching at rice paddies along the Ho Chi Minh Trail stirs me like the cry of bugles. After all, I tell myself, it’s our war, too.

The ammunition for that soldier’s

rifle may have ridden in a De Havilland Caribou built at Malton, Ontario; that napalm-spraying fighterbomber was almost certainly equipped with a Canadian-made Marconi Doppler Navigation System; those bombs along the Ho Chi Minh Trail may have been made from dynamite shipped out of Valleyfield, Quebec, and disgorged by a bombing computer fashioned in Rexdale, Ontario.

For too long, now, the Americans have been taking all the glory in Vietnam. We do our part, too. Oh, I know we don’t send troops in. After all, we are members of the International Control Commission and, as then-External Affairs Minister Paul Martin once told the House of Commons, “Our membership in the Commission makes Canada an independent witness, and this role we must continue to exercise objectively and impartially.” We do this by selling Americans the weapons they need to kill Gooks, Dinks and Slope-Heads. I like to think of this as “creative impartiality,” or maybe even “profit-oriented objectivity.”

We furnish arms under the Canada-U. S. Defense Production Sharing Agreement, which allows us to bid for military contracts across the border, just as if we were Americans — and at war with Vietnam. Under that agreement, we have sold more than $2.5 billion worth of war material since 1959, from fill for land mines to jackets for bullets, from complex electronic gear to the Green Berets worn so proudly through many a smashed hamlet (they’re sewn together in Toronto). We even put out an annual catalogue. Canadian De-

fence Commodities, a kind of Warmonger’s Shopping Guide, with illustrations of some of the goodies we have to offer, and we send troops of salesmen around the U.S. to drum up business. (I remember reading an account in the New York Times about a U.S. soldier throwing an elderly peasant into a well and dropping a hand grenade in after him; I couldn’t help wondering if it was one of Ours.)

While we don’t go around big-mouthing our role the way some nations might, the Americans appreciate what we’re doing. A senior U. S. Defense official told me, “Canada’s contribution has been considerable." It wasn’t so much the volume of what we sell — last year, we supplied about $350million worth — as our expertise in those fields we have made our specialty. Nobody makes a better bombing computer than the one turned out by Litton Systems, just outside Toronto, and our navigation systems are installed in nearly all U.S. military aircraft. “If we didn’t have this material, it wouldn’t cripple us,” the Pentagon man told me, “but it would hurt.”

There are some lily-livered ninnyhammers who think we should scrap the defense-sharing agreement. I don’t understand them. Here is a deal that brings us profit, brings the U.S. munitions, and doesn’t hurt anybody, except a bunch of Yellow Faces, and you are not, for God’s sake, going to bring them into it!

At one time, I thought it wasn't such a good idea to sell arms to the Americans. Article 17 of the 1954 Geneva Convention specifically prohibits importing arms into Vietnam

and, as members of the ICC, we are pledged to enforce that convention. Somehow it didn’t seem quite right that we should be in the business of breaking it. Government spokesmen used to say that, well, we didn’t know for sure that our weapons were going to Vietnam, and I accepted that, but one time I traced a shipment of dynamite from the Canadian Industries Limited plant at Valleyfield, Quebec, into a munitions plant at Crane, Indiana, where it was made into bombs and loaded on trucks for transport to Vietnam. “When your bombs go out of here,” the deputy director of ordinance told me, “they’re still warm.” Well, that gave me a kind of queasy feeling, so I raised the issue the other day with one of our diplomats in Washington, an attaché connected to Canada-U. S. military liaison. I asked him about our role on the ICC and our role as arms salesman, and he set me straight. “I think you’re being a little bit nit-picking,” he told me. You see how these diplomats operate, their mastery of the language. Objection to an official policy of profitable, bloodyhanded hypocrisy could be called a lot of things, but I never would have thought of “nit-picking.”

This same diplomat gave me a speech written by former Prime Minister Lester Pearson which sets out the official Canadian position. He asked me to “read, heed and inwardly digest” the speech. I did, and I’m glad I did. Pearson said just about what Prime Minister Trudeau says, that the defense-sharing deal began before the Vietnam war, that to abrogate it would not end the war but would hurt Canada economically (about 100,000 jobs would be affected), and that it would make the Americans very cross. It’s as if we ran a large department store and our best customer bought, among other things, a. lotof guns. Then it turned out that he used our guns to rob banks. Should we stop selling him ammunition just because of that? After all, he was a customer before he was a bank robber. What if he stopped buying from us altogether? We’d have to lay off staff, and that wouldn’t stop robberies.

No, it’s as the attaché told me, “The question is not our view of the ICC, but our view of the piece of real estate called North America, which we share with the U.S. We may not agree with what they’re doing in Vietnam, but you don’t forsake your friends just because they do something you don’t like.

“It’s as if,” he went on, drawing a brilliant parallel, “you had a neighbor whose dog was destroying your bush-

es. Now you might not like it, but you would learn to accept it.” Especially, if I may continue the parallel, when any attempt to trifle with the dog might result in having your throat torn out. By that I mean that if we broke the defense-sharing agreement, our friends and neighbors would be, as an associate secretary of defense once told me, “pretty goddam upset,” and might exact economic reprisals.

Well, we are an accommodating people, especially where the Americans are concerned. When India and Pakistan squared off against each other, we embargoed arms at once; when war broke out between Israel and Egypt, we did the same; but not in Vietnam. We don’t take it amiss that we can send munitions to South Vietnam but, because most of our big

drug companies are U. S.-owned and constrained by their Trading With The Enemy Act, we cannot send medicines to North Vietnam. We even help the Americans with chemical and bacteriological warfare, at Suffield, Alta. There, our scientists study germ and gas weapons, so we’ll know what to do if ever the bad guys try them on us. This research is turned over to our allies, and what they do with it is none of our business. If we can swallow that, we should have no difficulty adjusting to a continuing role as butcher’s helper in Southeast Asia.

So, the next time you see a picture of a Vietnamese baby lying in a puddle of his own blood, don’t let the Americans take all the glory. That blood is ours, too. Credit where credit is due, is what I say. □ 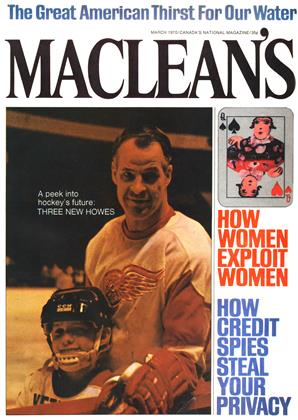