Prologue is a 90-minute feature done for the National Film Board by Robin Spry. It’s the story of how three young people in the summer of 1968 respond to the lessons implicit in the rape of Czechoslovakia and the riots of Chicago. One protagonist chooses political activism, another, the dropout approach of a hippie commune, and the third, a pretty young Jewish lady, flits in Jules et Jim fashion between the men, ideologically and sexually.

There are many good things in the film, particularly Spry’s courage in taking his crew and protagonist to the riots of Chicago, which provide a rather brutal backdrop for much of the film’s action. But, the actuality riot footage, the personal presence of

Abbie Floffman, the GenetGalbraith - Burroughs protest meetings, the Ginsburg lakeside poetry reading are far more interesting than either the story line or the characters in the film. Indeed, they overwhelm it and rob it of whatever point or substance it’s supposed to have. Devoid of the exciting actuality backdrop, the characters appear lifeless, their dialogue is stilted and artificial and the bulk of their interminable philosophical discussions seems either prissy or silly.

Still, this is Mr. Spry’s first feature film. To paraphrase Vincent Massey, let’s hope that in Spry’s case, what’s past is indeed Prologue.

They Shoot Horses, Don’t They? is a film adaptation of

Horace McCoy's 1935 novel about marathon dancers at a California seaside pavilion. In the fluttery hands of director Sydney Pollack it has become a muffled, peevish statement about where we’re really at in crisis-ridden America.

For would - be Platos in search of fruitful allegories about our present situation, the Great Depression is a veritable gold mine. It was the first time the American Dream had proven to be a total failure. The young were dispossessed and alienated. The state and social institutions were impersonal and unpitying. Today it’s the horror of Vietnam, the incommunicado of the generation gap and the abstractions of computer technology that trouble the thoughtful.

Sydney Pollack is nothing if not thoughtful and deepspirited. Life in the Pollack world-view is an Auschwitzstyle Marathon Dance of Death. A Nazi-like siren calls the contestants to the floor. Each contestant is numbered. A band plays on as they do their dance of death. A bored audience hurls pennies on the floor. In control of it all, the very symbol of manipulative technology is the cynical

master of ceremonies (Gig Young), urging the contestants on. “You don’t have to be number one as you amble along life's highway, but don’t be last," he warns.

Weighty stuff this, but thankfully not enough to obscure a fine performance by Jane Fonda. As philosophy, the film is strictly drugstore cowboy; as allegory, it’s merely depressing.

The Magic Christian is the

ultimate in pure film heresy. Plotless, witless, boring and banal, it purports to be social satire. As such, the approach is strictly knee-highlistic. The moral of this so-called story is that anybody will do anything for money. Obviously, so will Peter Sellers and Ringo Starr. Sellers, as the eccentric multi - millionaire Guy Grand, can’t buy a laugh for love of money. Ringo’s performance as his adopted son is more foetal than Beatle. Yul Brynner shows up in drag; Laurence Harvey plays a fag and Raquel Welch appears in full Wonder Woman regalia.

There is only one thing to do with a film as bad as this: feed The Magic Christian to the lions. □ 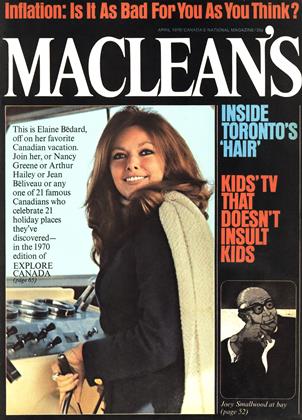