My friend Sean has quit climbing the CBC tower. And it wasn’t the height that scared hell out of him ... BOB BOSSIN May 1 1970

ONE BLAND THURSDAY afternoon my friend Sean McCutcheon climbed up the CBC TV tower in Toronto. He was working for the CBC, it was coffee break, and the day was very clear. From the top of the tower he saw a fire truck go through a red light a block away. He could see the traffic tangle downtown, city hall, the university, Cabbagetown and across Lake Ontario to the American shore. This is how he spent the following week:

The fire truck pulled into the CBC parking lot. Another pulled in, then some police cars, A crowd started to gather and the TV news cameras came out. They were all looking up. Sean began to feel a little embarrassed, gritted his teeth, and started down the tower. He met a CBC technician on the way up.

“Are you all right? We were worried you were going to jump.”

“Oh no, I’m fine. Just wanted to see the view.” Sean continued down and passed the first of several policemen, sitting on the steps, winded. “It’s all right,” Sean told him. “I talked to the guy and he’s not going to jump. He’s just catching his breath before coming down.”

run down. They declined. When they all reached the ground, he apologized for the fuss and explained that he had no intention of killing himself, he had just wanted to see the view and, since his coffee break was over, could he go back to work?

"Why don’t you come over to the car and we’ll talk about it,” said a police inspector.

They got into the car. No one talked, they just drove off. Sean said he thought he was being illegally detained. One officer called him a stupid ding-a-ling, and the other said he was uneducated.

AT THE STATION, Sean looked at the wanted posters and the girlie calendars. He answered some questions and explained that he’d had no intention of committing suicide. He was then booked for attempted suicide. He asked if he could phone a lawyer. “Sure,” said the desk sergeant, “later.”

Two constables then took Sean by the arms and led him to the elevator leading down to the cells. Sean said he would go on his own, honest. One of the constables pushed him harder. As the elevator door opened, Sean asked if they found him sexually attractive since they seemed to want to keep touching him. When the elevator door closed, one of the cops gave him a knee in the groin, and, as he was falling, a punch on the temple, just above the hairline, leaving no mark.

The cell was damp, small and contained a metal shelf for a bed and a combination toilet and drinking fountain. There was no toilet paper, “because you might strangle yourself,” the guard said. Sean asked to see a police doctor and if he could phone a lawyer. “Later,” the guard said.

Sean passed the time singing Johnny Cash songs, and making up his own Combination Toilet And Drinking Fountain Blues-, accompanied by banging On the metal shelf. Hfe etched some Spinoza quotations about the freedom of man in repressive society ori’ the, wall with his motorbike key, then his name and some shamrocks. Finally the police doctor came and, along with him, the constable who had hit Sean.

The doctor found no evidence of a beating. Sean pointed to blood on the constable’s knuckle. The constable said he’d scraped it walking down the hall.

IN THE EARLY EVENING, Sean was taken to 999 Queen Street West, the old Ontario mental hospital. The duty psychiatrist had the admission form all ready to be filled in. The psychiatrist asked name, address and age, and marked down Sean’s eye and hair color, and then he asked two psychiatric questions.

"Did you hear any voices on the way up?”

To get there, they had to pass through a series of locked metal doors. The ward itself consisted of a long corridor with wooden benches along one side, and small rooms with beds in them along the other. There were no paintings or decorations. The patients shuffled by in grey pyjamas and paper slippers. A nurse came by briskly and asked for Sean’s clothes. No, he said. She offered him a pair of grey pyjamas and some kind of drug. No, he said. He asked if he could phone his parents, who still did not know where he was. She said no, the phone was for staff use only.

The patients, however, were quite friendly, bumming cigarettes and advising Sean on how to get by: call the doctors “sir” and the nurses “miss”; don’t get excited about things; assume the symptoms the doctor says you have; gradually let yourself be cured and they will let you out. Some of the patients had their heads shaved for electro-shock treatment. Their eyes looked to Sean like burned-out fuses.

crowded. So Sean slept on the bench.

HE WAS AWAKENED at 6 a.m. for a urine sample. Then an 18-year-old patient who had befriended Sean asked the nurse if he could wear his clothes that day. When the nurse refused permission, he began to run at the locked metal cupboard where the clothes were kept. Then he tore off his pyjamas. Attendants grabbed him, and the nurse said, “Mr. A- would like his medication.” He walked around for the rest of the day like a zombie.

Later in the morning, Sean went to a group-therapy session. It consisted mainly of the patients’ telling on one another — how Peter slept in, how Mary didn’t go to occupational therapy. Georgio, a big man, spoke. He was from New York and he’d been arrested in a fight when he first arrived in Toronto. He was put in the hospital for a two-day observation. That was three weeks ago.

“Listen, you’ve got to let me go home to New York,” he said. “That’s where I belong. This place is no good for me. I’m crying more than I used to, and I’m starting to talk to myself. This place is making me mad.”

The psychiatrist said, “Now, Georgio, you said the same thing last week.” Georgio burst out crying and ran from the room.

Sean said nothing at group therapy. It was the best he could do not to cry. For the first time in his life he thought he might, if he could not get out of there, go insane.

THAT AFTERNOON a woman psychiatrist interviewed him, and left to arrange his release. Half an hour later,

she returned, but avoided his eyes.

“Well,” she said, “you will have to stay a while longer. The duty psychiatrist who admitted you said you were acting strangely.”

Sweet God! — please excuse me this one comment — the cops ask a man if he was attempting suicide and he says no, and they book him for attempted suicide; and he says don’t push me, so they push him harder; they knee him and punch him, and he asks for a doctor, and the doctor comes with the man who kneed him and punched him; and a psychiatrist asks him if he heard voices, and he says no, and so he gets committed to a mental hospital; and then THEY say that HE is acting strangely!

Finally, that afternoon, Sean found a pay phone, borrowed dimes from the inmates and called friends, lawyers, media people, psychiatrists he knew from the university. He then threatened to call Morton Shulman, the NDP health critic in the Ontario legislature. Sean was quickly transferred to the Clarke Institute, the Hilton Hotel of mental hospitals.

At the Clarke, there was another interview. This consisted largely of numbers games—for example, counting backward from 100 by sevens. Sean, a graduate engineer, scored perfectly. He asked if this proved he was sane. “No,” the duty psychiatrist said, “it shows you have an obsession with details.”

By then it was Friday night, and he could not receive a full examination until after the weekend. He had his own room, however, and a pretty nurse to sit in it with him for the first 24 hours. He told her what had hap-

pened and she said that she believed everyone should talk about what’s bothering them, that all of us have problems from time to time, and that Sean had to promise on his word of honor not to leave the ward or they would have to call the police to bring him back. He did not strangle her.

On Tuesday, he got his psychiatric examination. After taking a detailed account of Sean’s upbringing, sex life and fantasies, the psychiatrist agreed that his ink blots did look like winged phalluses, and arranged for Sean’s release.

On Wednesday, six days after he’d climbed the tower, they released him. The hospital refused to give him a certificate saying that he had been found sane.

THREE WEEKS LATER a bill came from the Clarke Institute for $208, plus $25 for therapy. Sean sent it back, suggesting they send it to the chief of police. He then received this letter:

Re: Clarke Institute of Psychiatry.

It now appears to us — I know you can correct this—that to collect the above amount it is necessary to enter this claim in a court of competent jurisdiction and to proceed. We hesitate to recommend such action to our client, the Clarke Institute, but you have left us with almost no alternative.

We must advise you that unless your intentions are known by us within five days, our client is to take the action indicated. Urgent. Act today.

I introduced Sean to Morton Shulman, who brought the case up on the floor of the Ontario legislature. The government was sorry, but there was nothing it could do. So was the hospital. And the police. There the matter stands.

Sean McCutcheon is articulate, good with numbers, and he has a university degree, friends in the media, in the law and in psychiatry. He counts himself lucky. Other cases like his have come to light only after months or, occasionally, years. And no one knows' how many there are that never come to light at all. Sean wonders if Georgio ever got back to New York, or if he is still waiting to be released, or if — thanks to the government, the police and^ the practice of psychiatry in this country — he’s been driven stark, raving mad. □ 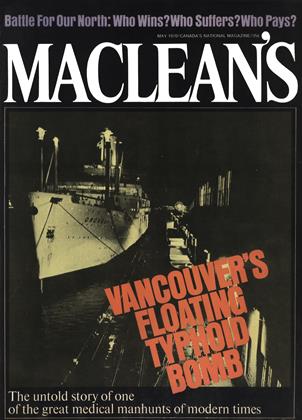