This is the first Maclean’s-Goldfarb Report. Using the techniques of the political imagemakers themselves, a top sociologist polls Canadians to find out our deepest feelings about the Prime Minister and his chief opponent. Some of what he found out may confirm what you already assumed. But a lot of it may just surprise you

This is the first Maclean’s-Goldfarb Report. Using the techniques of the political imagemakers themselves, a top sociologist polls Canadians to find out our deepest feelings about the Prime Minister and his chief opponent. Some of what he found out may confirm what you already assumed. But a lot of it may just surprise you

PRIME MINISTER TRUDEAU dominates the Canadian political stage today. He’s producer, stage manager and matinée idol rolled into one. His predeliction for a presidential style of government has won him unprecedented power. His flamboyant personality makes him part of the gossip of our daily lives. He radiates confidence and sophistication. By comparison, Robert Stanfield’s image retains all the lustre of a late-Stone Age cave drawing. Yet it is the overshadowed, unspectacular Stanfield whom more people (74%) trust than trust Trudeau (60%).

Politically, in other words, Trudeau is vulnerable. His power, his style, his once-admired romantic image are making people nervous.

This is a key finding of the first Goldfarb Report for Maclean’s, a massive survey of what Canadian voters are thinking in 1970. The study was commissioned from Martin Goldfarb Consultants of Toronto and Montreal, one of Canada’s top social-survey firms. In the past, Goldfarb has conducted research both for commercial organizations (Eaton’s, Ford, Shell) and for government and individual political parties. The results on these pages, based on a comprehensive nationwide poll, are as detailed as those used by the political parties themselves. The consumer research statistics you see here are precisely the kind that determine how the next federal election is to be fought. The difference is that you’re seeing the raw material just that way — raw, the way that, until now, only the strategists have seen it.

Elections, in this age of mass videocracy, are best viewed as marketing wars. Political parties seldom waste much energy preparing platforms any more; they devote their time and money to merchandising their leaders. Images are devised in advertising agencies, packaged by media experts and promoted like pop singers (Trudeaumania) or menthol cigarettes (Mr. Cool). A leader’s only reality, in terms of politics, is how he is perceived; the man is the style itself. The party that markets the right image at the right time wins the war.

For instance, is it accurate to say that Trudeau swears more and drinks harder than Stanfield? Can anyone prove that Trudeau has a shorter temper than the Conservative leader but compensates by being warmer, smarter and better in bed? It doesn’t matter. What’s important is that a clear majority (see table below) of voters believe these comparisons to be true. The result is that Trudeau, the worldly lover all the world loves, is Prime Minister and Stanfield, who merely projects humility and stability, is not.

At first glance, there is little in the Goldfarb Report to suggest Trudeau has anything to worry about. His personality is still considered far more positive and appealing. Quebec remains solidly behind him. So, in most respects, does the English-speaking middle class. As the man to handle Canada’s foreign affairs, he is virtually unbeatable. Stanfield, on the other hand, is still perceived as a bumbling, inconsequential and inadequate leader. People may feel more inclined to trust Stanfield, but they are not sure what to trust him with. He is even regarded as an almost total loser in his native Maritimes.

But on closer examination there are indications that the images are beginning to shift focus. Stanfield is considered the better man on some crucial domestic issues. He registers remarkable strength in the west, particularly on the Prairies, and there are signs that the great vote-laden urban industrial areas of southern Ontario may be switching to the Tories. Support for Stanfield is also growing among the poor and the very affluent. And while most may wish they themselves were like Trudeau, 50% of English Canadians want their children to be like Stanfield. (The chart below shows English and French opinion.)

Can these hidden strengths be exploited and Trudeau toppled? Martin Goldfarb believes they can. After all, the same merchandising tactics that converted Richard Nixon from a 1962 has-been into a 1968 president are available here. On page 40, Goldfarb shows how he would use the tools of his trade to draw up the program that, he believes could unseat Trudeau.

WHICH LEADER DOES EACH OF THE FOLLOWING STATEMENTS APPLY TO: 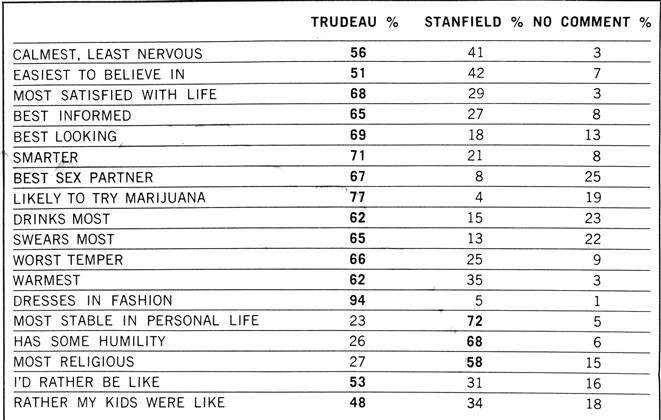 When asked to say what they personally liked or disliked about the leaders, people taking part in the poll were seldom neutral about Trudeau. He is a man who generates an emotional response — either open admiration and genuine respect or sincere fear and passionate hostility. With Stanfield, people either liked him because he hasn’t done anything to alienate people or disliked him for much the same reason. Some samples:

□ “He says whatever he thinks. He comes right out with it, to the point." (A young RCMP officer in Vancouver.)

□ “I think he is intellectually honest. I do not agree with a lot of his philosophy. I think he is not swayed by patronage." (A middle-aged male engineer in New Brunswick.)

□ "I think he is power mad. He fancies himself to be a dictator type. I think he feels the position as Prime Minister is for him to take trips". (A saleslady in Edmonton.)

□ "I just think he is for women and not for business." (A mechanic in Kingston, Ont.)

□ “He has not given me any reason not to trust him." (A Vancouver lawyer.)

□ “He is a straight man but I don’t know him." (An engineer in Montreal.)

WHICH LEADER IS BETTER ABLE TO HANDLE INFLATION IN CANADA?

Although total replies give Trudeau a slight edge, Stanfield is ahead with those for whom inflation cuts deepest — the poor, the undereducated, the people on fixed incomes. The government may well have an inkling of what Goldfarb’s figures suggest and this could explain the current crusade to stabilize prices. Anti-inflation policies may create some political enemies, but galloping inflation might stampede middle-income groups as well as the poor into Stanfield’s camp.

HOW DO YOU GRADE TRUDEAU’S/STANFIELD’S ABILITY TO HANDLE: 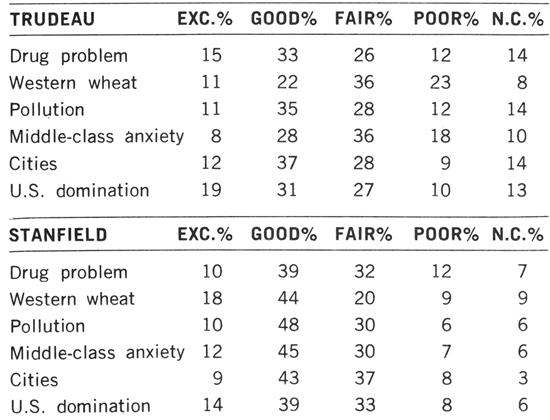 Martin Goldfarb detects a certain cooling of the national ardor for Trudeau in these figures. The marriage is far from breaking up but the electorate is beginning to fret, especially over domestic matters. Almost as many people say the Prime Minister is doing a poor job as say he is performing excellently. More important, a high percentage of people are unable to express any opinion at all about Trudeau. They’re not sure what to think. People can at least make up their minds about Stanfield.

Goldfarb’s questionnaire penetrated beyond easy-to-simplify political issues and deeply into the images of the leaders that have been projected on to people’s minds. It’s in this area, which Goldfarb calls “the mental marketplace,” that election campaigns of the 1970s can be won. Below are some of the more intriguing sidelights:

□ Trudeau is still the darling of youth. The over-55 age group tend to choose Stanfield when evaluating ability to handle most issues; the under-25 group is more likely to let it all hang out for Trudeau. Reduction of the voting age to 18 should help the Liberals.

□ Both leaders are regarded as steak-and-lobster men when it comes to favorite dishes. With Trudeau, 44% said steak and 33% lobster. With Stanfield, it was 38% steak and 35% lobster.

□ English Canadians are overwhelmingly confident that Trudeau is the better man to deal with the Quebec crisis. French Canadians reject Stanfield, too. But they are also far from enthusiastic about Trudeau on this issue. English Canada may be indulging in wishful thinking.

□ When asked about favorite sports, people identify Trudeau with personal involvement: skiing (53%) or swimming (21%). Stanfield is associated with spectator sports such as hockey (29%). Yet 51% believe Trudeau has a favorite hockey player but only 32% imagine Stanfield taking that much interest; people, in other words, perceive a greater involvement on Trudeau’s part with events in Canada. 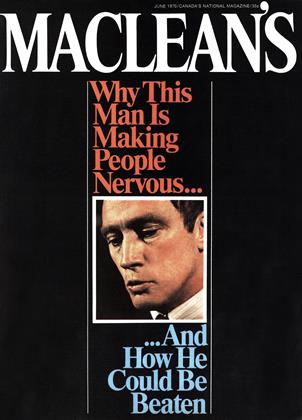