I WAS DRINKING beer on a cold Atlantic shore with the only man I know that I can rightly call an old friend, a man I have known since the time we first courted the mysterious and dewyskinned girl-women who would later become our wives, and now he said, “Well, here’s to us. Here’s to me and my wife, and here’s to you and your wife. There sure as hell aren’t many of us left.” I began to review the marriages that are not left, and it was something like drawing up a list for a large party. The So-and-sos, we almost forgot the So-and-sos. Yes, right, we simply must put down the So-andsos.

I was married in 1955. I’ve had nine jobs, and we have lived in four cities in three countries and, in all those years and all those cities and all those jobs, my wife and I have known perhaps 30 couples who did not ever become old friends but, for a while anyway, were pretty close friends. You move around, you lose

touch. Anyway, since about 1967, more than half of these couples have split up. Eighteen married couples. Thirty-six young middle-class men and women, and we had once known them all as the solid sort of well and truly married Canadians you might invite over to watch the Saturdaynight hockey. And now what? All smashed up. Like Dick Haymes and Rita Hayworth. Blam, pow, ouch, zot, aaargh, get out of here, you dirty swine! Don’t worry about that, baby. Slam! And I won’t be back. Tears of rage. Great lashings of booze. Bitter pills. Alimony. Who gets how much of the house? What days does Daddy get with the little ones? Did none of those long years mean a damn thing after all?

I wondered what had happened. Something huge and lumpy and terribly basic had shifted, and it had bowled them all over, but what was it? Their weddings had involved neither shotguns nor unexpected pregnancy and, in most cases, not even teen-aged brides or grooms. These friends of ours are all in their 30s now. They were grown men and women when they chose one another and, though few had been regular churchgoers since their days at Sunday school, they all got married in the mid-1950s; and, if you will remember, those years were a time in which people still stood up before clergymen in the full belief that marriage was a commitment for life. And a desirable one. As children, they’d heard about The Girl of My Dreams, and Mr. Right. Some Day My Prince Will Come. In high school, everyone was “going steady” with someone, and they mooned over Nat King Cole as he warbled Too Young; and then they fooled around a bit in university; and then they got married. The women were supposed to be virgins and, if the men were not, it was wiser not to talk about their experience right now.

Their fathers and their mothers had fought the Depression, shoulder-toshoulder, and they knew there was something to be said for making do with what little you had. Some of their fathers had gone to war and, at that time, the heroism of the mothers had resided in the waiting, the loyalty. I’ll wait forever, dear. Some sunny day. The most perfidious creature alive was that aid to the Nazis, that comfort to Tokyo Rose, that Quisling of the kitchen, the adulterous service wife. And if marriages did collapse, no one thought to blame the sacred institution itself; as everyone said about everything that was hard to digest, it’s just the war. Not too long after that, Ingrid Bergman, with her

decadent European ways, became notorious. A scarlet woman. She’d done the unspeakable. She’d taken up with a married man. And even by the mid-1950s, a divorcée was still shady by definition and, in many Canadian communities, something of a freak.

It was hard to imagine anything more serious than getting married. Liz and Dick, the open and unabashed adulterers, were the noisiest and most sensational love story of the 1960s but, in my time — in the time that all of us were either getting married or thinking about getting married — the hot love story was The Princess and The Commoner. Princess Margaret and Peter Townsend, the star-crossed lovers, and we were all sure they ached to do what all true lovers want to do. Get married. But no, I’m wrong. Margaret and Townsend were only the second-hottest love story. The best one was The Prince and The Movie Star, Prince Rainier and Grace Kelly. The wedding made in heaven. She knelt in radiant white, she curved her swan’s neck, she bowed her sleek and beauteous head, closed her long eyes, clasped her fingers under her chin, and moved her perfect lips in prayer. The Bishop of Monaco said, “Both of you are aware of the duties of marriage. You are both children of God.” Amen. And now, if they break up, please, I’d rather not hear about it.

You’d suppose that all this romance would strengthen the marriages of our friends, but what I think it really did was suck incompatible people into unions that were bound to be prickly from the very beginning and, at the same time, it made the marriages brittle and as vulnerable as icicles. These marriages had to stand up almost exactly as the beautiful orthodoxy of the marriage myth said they should stand up; or they had to fall down and crush people. They could not bend under baffling new pressures. They could not possibly roll with so basic a punch to the gut as adultery. For a long time now, some of my contemporaries have been in a cruel bind. In the years that began with the marriage of Grace Kelly, and continued with the smashing great stories of Liz and Dick, and then went on into this time of juicy free love among all these groovy kids who’ve got what we will never have again, and maybe never really had anyway ... in all those years, a billion wild new messages and blandishments and fascinating urgings were coming hard at my friends, bombing in on these apparently successful young couples, and all the circumstances and colors and opportunities and temptations and continued on page 18

provocations of their lives were changing in rash and dramatic ways. All the circumstances, that is, except one. And that one unchanging fact was the hard old vow: I am yours, you are mine, and that’s it.

But, of course, it isn't. Adultery may be the cause of a broken marriage, it may be a symptom, it may be a source of added agony for someone, it may be a fringe benefit for someone else; but, in 90% of the broken marriages that I know anything about, it was snuffling around in there somewhere. In any event, we old married people in our 30s (and marriage refugees in their 30s) may turn out to be the last generation to understand the full meaning of adultery in the work of a novelist such as John O'Hara. In O'Hara, if the cruel and elderly woman wants to stick the ice pick into her husband where he’ll never forget it, she says something like this: “Avery, you remember that time up at the country club, the summer we had the indigo Pierce-Arrow, and you and Esther Ralston won the mixed doubles championship? I’m sure you remember, Av. I remember, too, Avery, because what do you think I was doing with John all that summer? Dear, funny John. Only that one summer.” Avery, why are you falling over like that, clutching your throat and gasping for the very breath of life?

Some of our divorced friends have married again, some are living common-law with new partners, others are just messing about on their own. For some, the myth dies hard, and they endured inexpressible pain in the months after their marriages collapsed. Still, most of them are happier now than they were in the last grisly stretches of their first marriages and, so far as an outsider can tell by looking, their children are exactly as cheerful (or cheerless) as they were before.

In some cases, the husband and the wife had just found out that, after 10 or 15 years together, they simply could not bear to look at one another. They could not ever exchange civil words. They had made a bad mistake, a long time before, and now things had soured irrevocably; and they could afford the money to split; and there was no Depression, no war, no longer even much public disgrace in divorce, nothing to impose extraordinary demands of marital loyalty on either one of them. I have seen flashes of the mutually consumptive and grotesquely sadistic hatred that can characterize a truly putrid marriage, and sometimes it is intelligent to cut your losses. □ 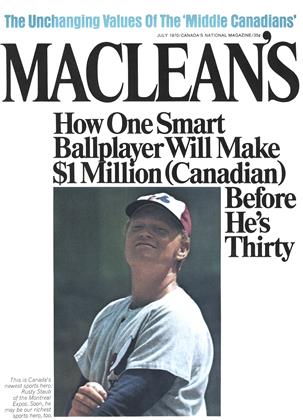