Canada’s publishers are in a lot of trouble: It’s sell—or sell out ROBERT WEAVER August 1 1970

BOOK PUBLISHING, says Jack McClelland, Canada’s bestknown book publisher, is “the easiest commercial business to get into. It requires no qualifications and no training. All it requires is $5,000 and a manuscript. But that isn’t the trick — the trick is to stay in the business once you’ve got there.”

In mid-June it was beginning to look as though the Ryerson Press, the oldest publisher in Canada (founded 141 years ago), had run out of tricks and might be on its way out of the book business. Ryerson had announced an enormous sale of 600,000 books from its inventory, and there were rumors about that the firm’s troubles reflected a gathering crisis in Canada’s publishing industry generally — a crisis that matters to us all, because Canadian publishing, despite its problems and its defects, is still the only method we have of distributing most of our creative writers, our historians, our political commentators, our textbooks, reference books and even our own cookbooks.

Late in the afternoon on Saturday, June 20, eight hours before the Ryerson sale was to-end and a little more than a week after it began, Toronto’s Varsity Arena was a depressing place. It was sad to watch some good and too many bad books (a friend of mine described the scene as “acres of nonbooks”) ending up this way. But it was a busy place, too, with whole families loading their shopping carts, and you got the impression that most of the people in the arena weren’t regular customers of the bookstores. That probably won’t placate Canadian booksellers, who have

watched unhappily in the past year as two major Toronto publishers held their own book sales to get rid of inventory and pick up working capital.

McClelland & Stewart did it first, and Jack McClelland now says that their sale brought the firm “enough trouble with the retail book trade so that we wouldn’t do it again.” The booksellers prefer to sell the books themselves at normal discount arrangements (now generally 40% off the retail price), and they prefer to dispose of publishers’ inventories as socalled remainder books, bought as cheaply as possible and priced for quick turnover.

There was actually a third book sale in Toronto this year. Last summer the novelist Hugh Garner discovered that his publisher — ironically, it was Ryerson Press — intended to remainder a collection of his short stories, Men And Women, to the booksellers. The one person who can’t benefit from a publisher’s sale or the remaindering is the author; he doesn’t receive a royalty payment on books sold at distress prices. So Garner bought 970 copies of Men And Women at 30 cents a copy and sold them at prices ranging from 70 cents to a dollar to a small book club, to the Toronto Public Library system and to students in a creative-writing course he happened to be teaching at the time.

expanding into film strips, video tapes, the whole electronic bit (Ryerson is considering it, although other publishers take a conservative view).

Book publishers in Canada have traditionally found a base for their operations in the agency system. The Canadian publisher acts as an agent for English and American firms, importing and distributing their books, sometimes coming close to drowning in the inventory that creates for them.

A radical view of the present situation holds that Canadian publishers should get out of the agency business, engage themselves in publishing books here and enter into co-publishing arrangements with British and American firms for books that they really want and feel able to sell. Robin Farr, who is director of publishing for Ryerson Press, says the company is considering a policy along these lines.

A take-over of Canadian publishing houses by conglomerates from abroad? Curiously, there aren’t that

many Canadian publishers who could be taken over, even if outside interests are considering them. There are McClelland & Stewart, Clarke, Irwin and the Ryerson Press. Oxford Press and Macmillan are Canadian branches of international publishing empires; Collins, Doubleday and Random House are not much more than Canadian agents for British and American firms.

Ryerson Press has been a special case, as the publishing arm of the United Church of Canada, and now, like other religious groups, it is being forced to discard or at least to modernize its habit. Its plant and its editorial policies have become obsolete. The book sale, according to Farr, exceeded the company’s expectations: more than three-quarters of the 600,000 books were sold to 70,000 buyers. It was presumably a device to trim the firm down for an eventual sale. Farr says about this possibility that they were “hoping to keep it Canadian, but the first thing is to survive.” □ 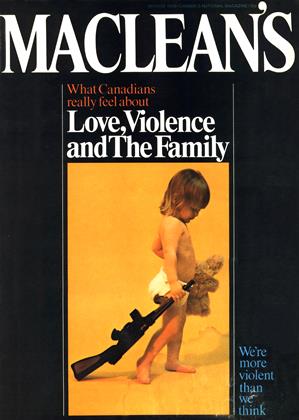