ALTERNATIVE NO. 2: MAKING CANDLES, THROWING CLAY AND FUN WITH 'BYALLAGEE’

ALTERNATIVE NO. 2: MAKING CANDLES, THROWING CLAY AND FUN WITH 'BYALLAGEE’

Touch Me, Feel Me, Love Me: Are the cultists playing with dynamite?

It may be providing "selffulfillment,” or the booming T-group fad may be damaging healthy personalities. Here staff writer ALAN EDMONDS reports on factors that worry psychiatrists. On the next pages, graduates of touch-and-feel tell what it did for them

THIS SUMMER'S BOOM in the touch-and-feel movement is reaching cult-sized proportions across Canada and worrying doctors, psychologists and even some of the reputable group leaders.

Thousands of middle-class Canadians are busily “sensitizing” themselves through experiments in touching, feeling and self-exploration in somewhere between 400 and 1,000 T-groups. Toronto is the capital of what one Vancouver psychiatrist calls “hopefully, another passing fad.” The city has around 120 such groups, many run by people with little training or experience.

Few of. these “trainers” are psychologists or psychotherapists, but the good ones have all taken courses in group leadership. Most dangerous are “trainers” who participate in a few sessions, then set up shop on their own.

Reputable groups, usually run through universities, adult education groups, churches or the YMCA, can cost up to $300 for a week or between $25 and $60 for a weekend. They are usually held in motels, hotels or lodges in rural settings. Evening group sessions are staged anywhere. They cost up to $15 a time.

The movement is uncontrolled, perhaps uncontrollable. There is no measure of its effects, no way to prevent anyone setting up as a trainer whether or not he is qualified to decide if participants are mentally stable enough to handle what is often a traumatic experience.

Yet a senior University of Toronto psychiatrist says: “Sensitivity training

may be evidence of a hunger for a quality of human relations that doesn’t exist in our society. But it’s like playing with fused dynamite unless the group leader has skill, sensitivity and competence.”

It's not that T-groups can make people clinically sick: the most damning conclusion of American Medical Association investigators was that a T-group might precipitate a psychiatric disorder already developing. Sensitivity training can disrupt or destroy the trainee’s lifestyle without supplying a satisfactory substitute.

These intensive personal encounter groups of 10 to 15 people involve brutally frank confrontations with yourself as others see you — or think they do. They strip away the inhibitions and your own self-image as well.

In theory, with the psyche thus bared raw, you learn more about the real you and others. The fact is often different. A secretary in an Ontario government department was “seen” by fellow T-groupers as an ugly, caged monster — and a month later she was still off work, still anguished, still grappling with the problem. She was a victim of what the U of T psychiatrist describes as “the danger that anger and frustration within the group is vented on a scapegoat.”

Adjustment is a hard-won thing for most people, and perhaps should be left

alone. It would be, say experts, if all group trainers were properly trained, sensitive and detached. As it is, Alex Owen, of ihe National Council on Human Relations, which has a list of 400 reputable trainers in Canada, advises:

“One danger is that you are perhaps plumbing depths that might be best left uncovered. Another is that some so-called ‘trainers’ may be working out their own problems on their groups. And the whole field can become a dangerous weapon: in a state of heightened awareness anyone with a dependent personality could be led into anything by a so-called ‘trainer’ with some misguided cause he may want to promote. In one extreme case a doctor reported that a trainer in Toronto took a member of his group to bed on the grounds it would help her.”

The ostensible goals are laudable. There is wide agreement among psychologists, psychiatrists and sociologists that our Hellenic-based society has unhealthily separated mind and body.

Lacking belief in God, heaven or even Nirvana, North Americans have recently contrived several surrogate grails, the newest being The Gestalt — a oneness of mind, body, time, environment and other existential values. Gestalt-therapy is practised by psychiatrists on clinically ill patients. The psychiatrists are angered that sensitivity trainers for “normal” people often invoke the word Gestalt.

In the name of The Gestalt, sensitivity groups try to induce a state of awareness of mind, body and environment as a totality. Industry-oriented T-groups don’t dig deep into the psyche; others bare it. The means vary from disconcertingly honest round table discussions to almost wordless sensual exploration of others’ bodies and the environment. There is no typical T-group training, thus Nancy MacNeill’s report on one of the bestknown of them (next page) is as valid as any. All produce a feeling of closeness within the group, which some participants miss “outside.” This has spawned a lonely breed called “group hoppers.”

Above all, there is no measure of the benefits — or dangers — of becoming sensitized. Researchers at the Ontario Institute for Studies in Education are midway through one follow-up study. They say there is an urgent need for some technique to “screen out” people who might be mentally disturbed by “touch me, feel me, love me” training.

Psychologist Martin Lakin, of Duke University, North Carolina, recently told a conference of colleagues: “Sensitivity training is one of the most compelling and significant psychological experiences for learning (and) may be a superior device for personal and social change. However, it may also be abused or subverted into an instrument of unwarranted influence and ill-considered, even harmful, practices.”/ continued on page 38 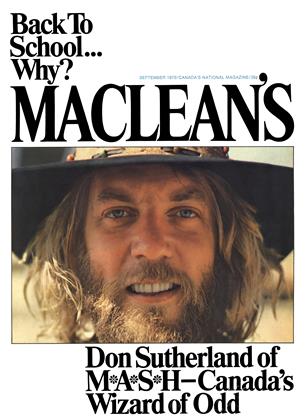