IN PRAISE OF THE TEPEE Don Francks October 1 1971

Chief Kingbird, my friend who bosses the Red Pheasant reservation in Saskatchewan, pointed to a hill overlooking a beautiful valley. “It is your homesite whenever you wish to use. Below the hill are two ponds of clear water.” So we built our tepee and moved in. “We” consist of my wife, Lili, whom our Indian friends call Meeko Kahayo, which means Red Eagle; our small daughter, Nayheeo Neepin, which means Cree Summer, and that’s her real name; and me — I’m known, for no reason I can figure out, as Iron Buffalo.

I guess I became interested in Indians and the theatre at about the same time, when I was a very young boy. I was an orphan. Not an ordinary orphan, because I know nothing about my real parents, not even what nationality they were or even where I was conceived. So I don’t know if I should get mad if someone insults the Irish, or makes cracks about Polacks or Eiunkies. I just don’t know what I am. I’d like to write “earthling” on all those documents where they have a space for “nationality,” but I know they wouldn’t go for that and would make me write “Canadian.” Which isn’t a bad thing to be if you have to be something.

I was lucky in the couple who adopted me. They gave me freedom and a very open mind. When I was very young, my mom gave me a book called Indians Of America by Dan Beard. It had all kinds of sketches and paintings and showed all the ways of life of the Indians. I really liked that book. I still have it. It’s one of the few books I've managed to keep.

A while later I was playing with a group. I played drums and even some trombone — terrible trombone at that time, I remember. We played at a lot of small British Columbia towns and I met a lot of Indians on those trips. For a while I lived in Chilliwack, BC, and used to hang around the reservation just outside town, getting friendly with some of the Indians.

There were a lot of Indians out in Steveston, too, where I worked on the fishing boats, and Pauline Johnson’s The Song My Paddle Sings made me feel just plain good. Gradually I began to see that these people had been around 10,000, maybe 20,000 years and everything was just the same. They never seemed to change anything. I figured it was because they were part of it, not just trying to he it.

The way my theatrical thing started

was the same I guess. My mother enrolled me in elocution school and presently I was doing things for blind audiences, for veterans and prisons and places like that. I did things at school all the time, and got to sing on the radio. Then I went to sea because I didn’t like the educational system at all. Then I took up a trade at a foundry, but still going out to clubs, still doing things at night. Then I got into musical comedy and television. Then Broadway and on to Hollywood for network TV and films — and from films to obscurity, which is a little town this side of stardom.

I met Lili in Rainbow Valley, which was in beautiful downtown Burbank. We were making a picture called Finian’s Rainbow. Everything was fine and Lili and I went up and got married at the Red Pheasant reservation, in the medicine tepee of the native church.

I was busy in showbusiness and making good money. But I don’t know whether I've really ever been an actor. An actor is supposed to be a mirror that reflects life. But some of the things I reflected when I was an actor — “Well, you murder these three kids and then you go and hit this old lady and steal this money” — were certainly different from what I’m doing now. That’s why Lili and I decided we didn’t want that kind of career, and why we took off for Indian country.

Indian tradition has it that eons ago, before the Indians had shelters of any kind, a brave sat disconsolately under a tree in the pouring rain and idly wrapped a fallen leaf around his bunched fingers. He looked at it, noticed that the rain poured off the

conical leaf — and lo, the first tepee was born.

So we moved into our tepee. It wasn’t an arduous task: sleeping bags, one frying pan, one pot and a few tin dishes. That was all we felt was needed to live with nature. Oh, there were a few luxuries, too: my guitar, some flutes I had carved out of bamboo, and half-a-dozen books. Maybe that’s why there’s so much more room inside than appears from the outside. We had 12 people to a meal not long ago, and there was no crowding.

A tepee is a truly wonderful structure. In all the hundreds of years since the first Indian built the first tepee, I swear nobody has improved on it for cheapness, ease of construction, mobility, even comfort. You take 10 or a dozen smallish poles (spruce is preferred, although the Indians also use pine; hence lodgepole pine), clean the bark off for the sake of comfort indoors, form them into a circular pyramid, bind them at the top where they protrude a foot or two, wrap them in waterproof fabric (canvas usually, but elk hide if you can afford them; the Indians, of course, used buffalo hide) and there’s your tepee. Well, not quite, there’s the waterproof fabric door, of course. And, more important, an ingenious system of flaps near the apex which act as an air conditioner in hot weather, serve as a chimney for the cooking and warming fire in cold weather. Today you can buy an already assembled winterized duck tepee for about $250. That’s for the tepee itself; the extras — floor, liner and outside awning — cost another $175.

We haven’t given much thought to our plans for the future. I know I’d probably like to publish a few books and I’d like to make a few flutes. I’d like to carve a few things and sing a few songs with my wife. I guess as long as they have this stuff money around, every now and again I’m going to have to do something to get at it. Perhaps I can do it entirely from the land, which is something I’m going to take a good look at. 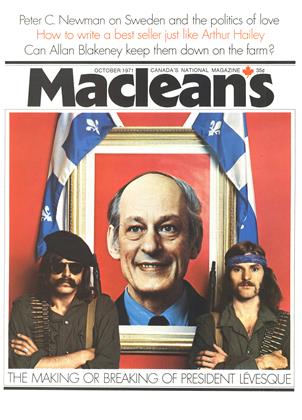