The next New Thing in pop music will be — are you ready? — Oriental rock. Six months from now one of those how-to-do-the (name of new dance, e.g. funky chicken) songs, this one called something like Doing The Chou En-lai, will make the Top 40, George Harrison will trade in his sitar for a koto, the Japanese equivalent, and a new group called Peking Duck or maybe Yellow Peril will popularize those shapeless, colorless uniforms worn by bad guys in all those terrible Korean war movies.

It came to me, this insane revelation, as I was working my way through some new albums. One of the really nice things about writing a music column (although admitting it is like admitting you buy Playboy not for Updike and Roth but for the pictures: honest but demeaning) is that record companies send you free copies of new albums. Loot. Movie critics get passes from Famous Players, book reviewers assemble magnificent libraries, theatre critics get free tickets to the Stratford Shakespearean Festival. I get records.

As a teen-ager I used to lie awake at night stalking up and down the illuminated dial of the plastic mantle radio beside my bed hunting for stations in such faraway places as Nashville and St. Louis, where — (attention nationalists) — they got new records a couple of weeks before they were released in Canada. It was on a Cleveland station at about one in the morning that I first heard Buddy Holly’s That’ll Be The Day, and I was so excited I twisted the dial until dawn hoping to hear it again. When I was 17 I dropped out of the rock band in which I played at singing and rhythm guitar (I used to comb my hair like Ricky Nelson and imagined there was a resemblance) and prepared to become a disc jockey, taping hour-long shows with a Seabreeze portable record player and an antique dictaphone (my ideal was a super-cool Salt Lake City jazz deejay named Al “Jazzbo” Collins). I’m nearly 30 now — still younger, I keep reminding myself, than John Lennon and Bob Dylan — and, although I haven’t made it as a rock star or a disc jockey, my craving for pop music hasn’t diminished in the slightest. Some people learn to read and carry on a lifelong affair with books. With me it was learning to turn on a radio. I love records, and I look forward with childlike enthusiasm to the hours I spend each month reviewing more of them than I could ever afford to buy on my own.

Anyway, I was listening to this pile of new albums and not enjoying myself as much as I usually do when something I’d been vaguely aware of for weeks and even months came suddenly into focus: nothing is happening out there. It’s not so much that there’s a lack of good music — although there is. It’s that even the good stuff, that one album in every 10, is beginning to sound, as John Lennon says, like Muzak to my ears. It’s as if it all came out of the same recording

Where have all the artists gone? Of course! Gone to graveyards everyone. I’d never stopped to add the toll up: Jimi Hendrix is dead: Bob Dylan is playing dead; the Beatles, gone their separate ways, might as well be dead. Which, particularly in this year of what critic Robert Christgau calls the International Pop Music Community (George Harrison sits in with Dr. John, Eric Clapton sits in with Stephen Stills, Leon Russell sits in with everybody), leaves pop music with a lot of great players and no leaders.

So it’s oldies but goodies time. To begin, two changes of pace: Surf’s Up (Reprise RS6453) in which the Beach Boys, those tanned and happy apostles of the Annette FunicelloFrankie Avalon school of social thought, discover such unfun - fun - fun things as pollution, poverty, student unrest, etc.: and Bark (RCA FTR 1001), being a return to earth, somewhere, one suspects, in the vicinity of Nashville, of the Jefferson Airplane. One great blues album: The London Howlin’ Wolf Session (Chess 60008) with Eric Clapton, Steve Winwood, Charlie Watts and Bill Wyman, which is a joyful coming together of an aging black American bluesman and his young, white British admirers. One musical document: Link Wray (Polydor 2425 067) brings back a name from the past (he made a very important hit, a guitar instrumental entitled Rumble, in 1958) and should interest anyone who is too young to remember what it was about Elvis Presley et al that so excited teen-agers in the Fifties. More of the same: new albums from John Sebastian, Pour of Us (Reprise MS 2041); Joan Baez, Blessed Are . . . (Vanguard VSD 6570/1);

and Paul Butterfield, Sometimes I Just Peel Like Smilin’ (Electra EKS 75013). Locally: Bruce Cockburn’s second album High Winds White Sky (True North TN3) isn’t nearly as affecting as his first but is technically perfect and worth having if only for the song One Day I Walk’, and despite the syrupy production David Wiffen (Fantasy 8411) is a very good first album from a talented composerperformer and alumnus of the now defunct Three’s A Crowd.

Slim pickings. These quiet times occur every now and then, and it’s because they invariably signal the imminence of some new aural experience (God knows, if there’s anything the record industry is prepared to fight it’s quiet) that I grasped at once the significance of the first band on side two of Moby Grape’s new album 20 Granite Creek (Reprise RS 6460), an instrumental called Chinese Song. Yes, the koto. I mean it’s all so perfectly clear. President Nixon makes that friendly visit to China in the spring and America, which has been reading the Reader’s Digest's warning about the teeming masses of Asia for so long it is now genuinely afraid, is so overcome with relief it rushes to embrace oriental culture. Enter Peking Duck. Well, it’s possible. 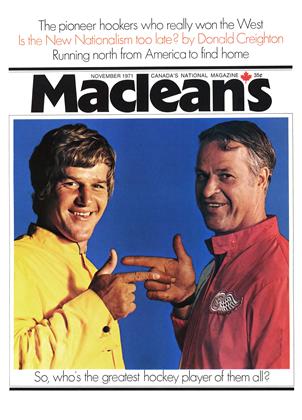