We music columnists don’t have much contact with authors. It’s the book reviewers who are invited out for drinks with Pierre and Farley, Laurence and Richler. I’m not complaining. There are compensations. When David Crosby and Graham Nash did a concert at Massey Hall recently, I had breakfast at the Royal York the next morning with their manager, Elliot Roberts (he also manages Joni Mitchell and Neil Young and, in case you’re interested, he thinks Leonard Cohen is the Yeats of his day). It’s just that, from a distance anyway, campari and soda with Arthur Hailey seems so much more, well, literary than beer with Bernie Finkelstein. And besides people know who Arthur Hailey is, but they’re not impressed that I’m on drinking terms with Bernie Finkelstein until I explain that Bernie Finkelstein manages Bruce Cockburn and Murray McLauchlan and Luke Gibson and Syrinx, which makes him the Jack McClelland of the Canadian music business.

You can imagine, then, how excited I was when I got the letter from the Great Northern Rock & Roll Publishing Company Ltd.

“As you may have heard,

I am the author of a forthcoming book on the Canadian music scene, Axes,

Chops And Hot Licks, which is being published by M. G.

Hurtig Ltd. ... I am undertaking a national promotion tour on behalf of the book in November. Any help you can give us in turning on more people to what’s happening in the Canadian music scene would be greatly appreciated.

“Many thanks in anticipation . . . warmest regards.

Ritchie Yorke may not be Canada’s foremost authority on pop music, as the blurbs for Axes, Chops And Hot Licks would have you believe, but he is undeniably the most celebrated Canadian writer in the field. In 1967, when I first ran across him, he was writing for After Four, a weekly teen supplement published by the late, lamented Toronto Telegram. He’s come a long way since then — articles in Rolling Stone and Billboard, liner notes for Aretha Franklin. Beer with Bernie Finkelstein? Ritchie Yorke drinks tea with John and Yoko! And yet, I confess it, the Great Rock & Roll Publishing Company’s Editor-at-Large has always left me cold.

There’s his writing. “His voice can be as searing as a blow torch on bare flesh,” he says of King Biscuit Boy, one of the 40 individual performers and groups he gives the onceover in Axes, Chops And Hot Licks, “his phrasing the equal of any man alive.” (Ritchie was never one to worry about hyperbole.) Walt Grealis, the editor of RPM, is described as

being “a thorn in the side of Canadian apathy,” a phrase worthy of Réal Caouette. Of Joni Mitchell he writes that she “now lives, a golden goddess, in Laurel Canyon, California. She is one of west coast folk’s elite — respected and often loved by her contemporaries . . .” Hmmm. Of the Guess Who’s producer, Jack Richardson: “To reach the upper strata of the producing profession Richardson had to travel a hard road.” Of Andy Kim: “The battle he fought is one that Canadians may never have to fight again; Canadian talent shall overcome.” Had enough?

So he writes like Rod McKuen. But, what is worse, he is more salesman than writer, and the product he’s flogging in Axes, Chops And Hot Licks is Canadian music. The bad guys in “the story of how a musically speechless nation became in two short years the world’s third-leading producer of international hits” (do I hear violins?) are the broadcasters, disc jockeys and critics who have not cheered on Canadian talent. The good guys are the agents, producers, artists and people like Walt Grealis and Pierre Juneau who have. Especially Juneau, who as chairman of the Canadian Radio - Television Commission forced Canadian content quotas on a skeptical broadcasting industry. That was in January of this year. “At last Canadian music would be heard on the country’s airwaves. Finally. Canadian musicians would be given a chance to fairly compete with Americans ... It was a triumph of immeasurable proportions.” Indeed it was — but for whom? For the performers? For the industry? Yes. But what about the consumer — you know, the people who it is hoped will pay $7.95 for this

book ($2.95 for the paperback)? Is all this made-inCanada music we’re listening to distinguishable in any way from the imported product? Has the Poppy Family really enriched our musical experience?

Don’t misunderstand me: I’m really happy that Doctor Music and the Stampeders and Anne Murray have been given a chance to compete fairly with Americans. But don’t ask me to get weepy about the fact that had it not been so I might have been denied songs like One More Mountain To Climb, Sweet City Woman and Talk It Over In The Morning. The point being that most of the music we’re making in Canada these days is no better than what spills over the border from the United States — and I refuse to be persuaded that I am showing something less than true patriot love if I say so.

Ritchie Yorke wants us to celebrate not an artistic triumph but a commercial triumph: the creation of a viable Canadian recording industry. “Before this decade spins to a close,” he writes, “the world will be looking and listening to Canada for its rock musicians and writers. A healthy industry will pour millions of dollars into the economy; the powerful communication of rock will give Canada a youthful and exciting image with young people the world over. The potential is very large and very real. In taking the steps it has, Canada has done itself a great service. Now let us all join in.” That’s the rhetoric of the Chamber of Commerce. There is more substance, I suspect, in Bruce Cockburn’s observation: “The Canadian music business,” he says in Axes, Chops And Hot Licks, “is not yet as rotten as the U.S. scene. But it’s showing signs of catching up.” ■ 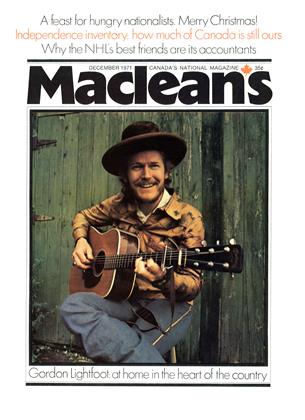