IN THE PAST two or three years readers of the small literary magazines, The Canadian Forum and The Tamarack Review, may have been aware that the young Toronto writer Dave Godfrey was working on an unusual novel set in Africa. But from excerpts in those magazines it was impossible to tell the true range and ambition of the novel, now published as The New Ancestors. It’s a formidable work of great complexity, and it has seized the attention of its reviewers. Peter Sypnowich of the Toronto Star called it “a grand novel in the Dostoevski manner” and said of Godfrey, “Here is a writer to rescue literature.” Novelist Margaret Laurence, writing in the Globe and Mail, acclaimed it a “wise, entertaining, explosive, richly textured and splendidly structured novel.” Godfrey, born 32 years ago in St. Vital, Manitoba, teaches Canadian literature and creative writing at Trinity College, University of Toronto, and is one of the three founders of New Press, a radical and nationalist publishing firm. He did his apprentice work in the respected creative writing courses of the University of Iowa. From 1963 to 1965 he served with CUSO (Canadian University Service Overseas) in Ghana, and there is an obvious connection between that experience and the conception of The New Ancestors. Godfrey also had the good fortune to discover in Margaret Laurence a predecessor who has published a novel and a collection of short stories with African backgrounds, thus demon-

strating that Africa isn’t territory beyond the perception of Canadian writers.

The New Ancestors is a big novel of 400 pages about an emerging African nation called Lost Coast. On a map that Godfrey has provided for his book the fictitious Lost Coast occupies the approximate position of Ghana, and the offstage figure he has created of the nation’s liberator and president, the Redeemer, bears a resemblance to Ghana’s Nkrumah.

Two years ago Godfrey was one of three young writers whose fiction was published in an anthology called New Canadian Writing 1968. Each of the contributors provided a short introduction to his work, and in his introduction Godfrey wrote: “I’m bored with plots in stories ... I dream a lot of language now, just language, not character or background or narrative flow, just language.” There is a warning here for readers of The New Ancestors who are still committed to traditional fiction.

The novel takes place in the mid-1960s, after the final formal liberation of the country has taken place and it is beginning the struggle to find its soul. (There’s no doubt that Godfrey sees more parallels between Lost Coast and Canada than some of his fellow citizens might admit.) The new imperialists — the Americans, the Russians and the Chinese — have entered Africa as the old imperialisms retreated. The Redeemer has beén changed from his purity as liberator to the more ambiguous role of leader of a political state. In the flux of personal and political loyalties that is now

taking place we view Lost Coast through a handful of characters : Gamaliel, the Redeemer’s committed supporter, who has returned from America to become a victim of assassination; the bitterly disillusioned First Samuels; the exiled Englishman Michael Burdener, guiltridden echo of the old imperialist past; and others.

The New Ancestors is the impressive and ambitious work of fiction that the reviewers have been describing, flawed only in a hypnotic quality of Godfrey’s imagination that has a tendency to run away with itself. But Godfrey’s confidence in the book’s structure and in its fine prose makes it an almost always compelling, though often difficult, novel to read. It reflects both a real intelligence and a rich imagination, and in its probing, its violence and its unease The New Ancestors is a contemporary and committed work in a way that most of the fiction published in Canada still is not.

Godfrey told me recently that he brought out of Africa a sense of “the determinism that is built up in a family from generation to generation,” and which to him is opposed to the American Dream, where “Adam is reborn for each generation.” What makes him anti-American (he denies the rumor that he refuses to read American books) is the belief that “they built culture on a false view of man — the view that the sum of individual greeds will somehow produce happiness.” Culture, to Godfrey, is a “kind of evolutionary thing,” and the possibility of evolution, he says,

still exists in Canada. He is thinking about a study of Canadian and American writers and their differing views about society and the individual, but what may be even more promising is a novel with the working title The Confessions Of Williams Dungood (Ontarionian) a fictional autobiography of a Canadian living in the 1960s, and the first of several projected novels that are interconnected and about family.

In 1968 Dave Godfrey wrote that the fiction he was planning for the future “is going to be completely invented . . . just dreams and history and the latest discoveries of science...” If that is an accurate prediction and The New Ancestors a true prelude, the map of Canadian fiction is in for some radical alteration. 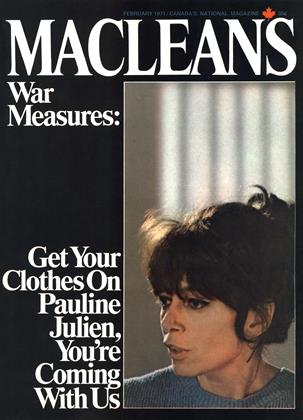