Jerry Lee Lewis was very big in 1957 and, like Elvis Presley and Johnny Cash, he might have been a big star still — if he hadn’t married his bass player’s daughter. He was 22 years old. She was 13. Such marriages were not uncommon in the hillbilly country where Jerry Lee Lewis grew up, but in the big cities where he made his living teenagers admired Pat Boone because out of respect for the sanctity of marriage he refused to kiss his leading ladies in the movies. When the kids learned about Jerry Lee Lewis’s marriage they began yelling insults such as “Go home, crumb, baby snatcher,” and by 1958 he was nowhere.

I remember the incident well because Jerry Lee Lewis was then one of my three favorite rock stars (Carl Perkins, and Chuck Berry were the other two). I was 14, a member of the white-sport-coat-and-a-pink-carnation generation to whom puberty happened at about the time Elvis Presley was inventing rock’n’roll in a Sun Records echo chamber in Memphis. It was unfair, I thought: marrying young Myrna didn’t, after all, change the way

In pop music, I learned, there are always other considerations. Convention, for instance. Some things just aren’t done. In Jerry Lee Lewis’s day marrying a 13year-old girl (who some said was his cousin) was one of them. It would be equally suicidal today to, say, get a brush cut or endorse army service as a character-building experience. Pop music always swings with the times, and this is no time, friends, for barbers or battle hymns. Maybe next year.

As kids we had heard about payola, but it was years later when I began reviewing pop music for a daily newspaper that I learned about another of those other considerations: corruption. Oh, nothing serious. Nothing, certainly, that would interest the Mafia. Disc jockeys who flog concerts in return for a piece of the action, pop-music columnists who make a few bucks on the side as impressarios, managers who get girls to scream themselves silly for the price of a free ticket — that kind of thing. RPM, a Canadian trade magazine, recently published an essay by a Canadian critic on the subject of “hype” (which is otherwise and appropriately known in the trade as “grease”). "The days are long gone,” he wrote, “when an album could make it strictly on the strength of the musical performance therein . . . hype has been increased over the years to the point where the record industry could not continue to revolve without it.” See what I mean?

Pop music has changed since the sock-hop days of my youth. It’s not as innocent and sometimes I wonder if it’s as much fun. Then again, it isn't as simpleminded or as silly or as exclusively pelvis-directed as it was then. I’m as big a fan today as I ever was — but, more knowledgeable about all those other considerations, I’m a more wary fan. The only

reality, I’ve learned, is the music. To paraphrase Flip Wilson, what you hear is what you get. Everything else is irrelevant.

Including nationalism. That would have seemed a pointless observation in 1957 when virtually all our pop music was imported. But that, too, has changed. The Canadian RadioTelevision Commission forced stiffer Canadian content quotas on the country’s broadcasters this year, and it has created such a demand for Canadian music that our branch-plant recording industry is suddenly opening its studio doors wide to anyone who can hum O Canada. It’s a nice change; for too many years the Joni Mitchells and Neil Youngs of this country have followed their careers across the border and then, there being no reason to return, have forgotten the way back. But the CRTC wasn’t thinking only of the artists and the industry. There was something there for the rest of us, too — the hope that creating opportunities for Canadian musicians would encourage the expression in music of the things that make our culture distinct from, say, American culture. I recall Richard Goldstein, the celebrated American pop-music critic, expressing amazement at the poor reception given Quebec rock star Robert Charlebois at the Toronto Pop Festival in 1969: “How come you (Canadians) clap your hands raw over an albino bluesman from Texas (Johnny Winter) and tap politely when your own man comes on? How come you treat an imitator like a patriot and an original like a foreigner?” The answer is simple: We haven’t produced enough Canadian originals to be able to tell the difference.

the year. Business is booming, thanks to Juneau and the CRTC, and all of us can be grateful for the results. Besides Anne Murray, who couldn’t be more popular if she married Bobby Orr (I can see the Prime Minister standing at the bathroom mirror, shaving and saying: “Mirror, mirror on the wall, who is the swingingest couple of them all?” And the mirror answering: “Sorry, Pierre, it’s Anne and Bobby, now”) . . . besides Anne Murray, the airwaves and record stores are full of Bruce Cockburn, Jessie Winchester, Frazer and DeBolt (about whom more below), Brent Titcomb, David Wiffen, Lighthouse, Boss Brass, and Tobi Lark, to mention only my favorites; yours may include The Guess Who, Mashmakhan, Gene MacLellan, the Perth County Conspiracy, Chilliwack, Beverly Glenn Copeland, Russell Thornberry, Tundra, The Stampeders, The Bells, Steel River, Crowbar, The Original Caste, and on and on.

I am a nationalist and, given the realities of our shared tenancy of this continent with the United States, I believe in the CRTC’s Canadian content quotas — just as I believe in the Canadian Film Development Corporation and government support for Canadian publishing. And yet I said nationalism was one of those irrelevant other considerations. What I meant was simply this: If you like Anne Murray, I hope you like her not because she’s Canadian but because she’s good.

Fraser & DeBolt With Ian Guenther (Columbia C30381). The idiom is country-style folk but the attack is breathtakingly original. Alan Fraser and Daisy DeBolt, who sing and play guitar, and Ian Guenther, who plays violin, have snuck cowboy music into the conservatory and taught it how to think. It’s too far out to be the most popular Canadian recording of the year, but it could be one of the most important. ■ 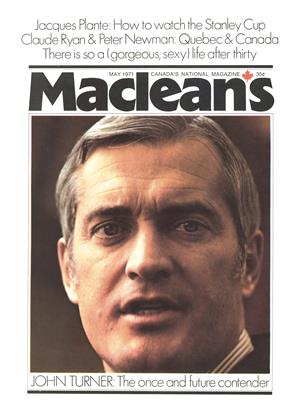