SORRY I WAVERED, JON, I LOVE YOU AFTER ALL JOHN MACFARLANE September 1 1971

I have a friend who knows a great deal about music and whose judgments in such matters I have learned to respect, and on a traumatic evening about a year ago I was playing Joni Mitchell’s third album, Ladies Of The Canyon, for him. I had only just bought the album, liked it, and my friend is one of a half-dozen people with whom I feel a compulsion to share my enthusiasms. Something was wrong, though. We were well into Woodstock, the second-to-last cut on the second side, and he hadn’t said a word. He just sat there, hiding his face behind the album cover only pretending, I realized, to be reading the lyrics: in fact, he was trying to conceal his embarrassment. After the extravagant buildup I’d given the album, how could he tell me he hated it without hurting my feelings?

When the record was over we moved on quickly to something else, trying to ignore the moment, but it was still on my mind a few days later. So I asked him: Why didn’t you like the new Joni Mitchell album I played for you the other night? “Because,” he direct-

ly, “I can’t stand that sickeningly-sweet little-girl-in-Mother-Gooseland voice of hers.”

Or words to that effect. Maybe I should have discounted so subjective a response — he might just as well have told me he didn’t like Greek food or the films of W. C.

Fields — but it shook me.

Ever since, I haven’t been able to listen to Woodstock or Big Yellow Taxi or any of the other songs on that album without fighting back the mental image, perfectly rendered in the style of chil-

Until I heard Blue, her new album, that is. Blue has brought me back to my senses. Blue has restored my resolve that if circumstances ever force me into another line of work I will try for position carrying Joni Mitchell’s guitar case.

I should explain that Joni Mitchell and I go back a long way together. No one had heard much about her in August 1966 when she blew in from the Prairies for the Mariposa Folk Festival, which I happened to be covering for the Globe and Mail. Bût there was something about this pale, frail folk singer from the West, something about her performance, that reached me. I remember writing about a “willowy Canadian” who “painted lyrical pictures of life on the Prairies: And I get the urge for goin’ / When the meadow grass is turnin’ brown / And summertime is failin’ down / And winter’s closin’in,” I should admit, too, that I was in a receptive mood that August weekend. It was at that Mariposa Folk Festival that I proposed to my wife. Joni Mitchell sang at my engagement.

When I recall that performance, indeed when I recall any of the occasions on which I’ve heard her sing, it suddenly occurs to me that my friend who doesn’t like Joni Mitchell

only hears half of what I hear. Yes, it’s true, there is in the way she sings and the songs she writes a little girl wearing a pink-taffeta party dress and smelling faintly of Johnson’s baby powder; innocent, naive, sometimes silly. But there is also — and I suppose this is what I find so utterly fascinating — a woman wearing nothing at all and smelling expensive; sensitive, worldly, a woman of appetites. The little girl sings high, the woman low, and sometimes, for instance in the song Michael From Mountains where her voice falls then rises in the lines Go where you will go to / Know that 1 will know you, the two voices become briefly one. And in that instant Joni Mitchell is impossibly and all-at-once all the good things that little girls and big girls are made of.

If her first three albums acquainted us rather more with Joni Mitchell the little girl, Blue (Reprise) reveals more of Joni Mitchell the woman. It is an album of feeling-blue music, as the title implies. It might have been subtitled Joni Mitchell Sings The Can’t-Live-With-You-Can’t-Live-WithoutYou Blues. And if, as I believe, it is her most accomplished album so far, it is a triumph of composition rather than performance. Which isn’t to say that her singing leaves anything to be desired — but what makes Blue truly exciting is that it captures a song writer of promise on the threshold of fulfillment. She has always had a unique sense of melody, but she used to play word games; now, apparently on a romantic bummer, she wants to tell us about herself.

From the song A Case Of You: Oh I am a lonely

those ones that ain’t afraid / 1 remember that time you told me, you said / ‘‘Love is touching souls” / Well, surely you touched mine / ’Cause part of you pours out of me / In these lines from time to time / Oh you’re in my blood like holy wine / You taste so bitter and so sweet / Oh I could drink a case of you, darling / And 1 would still be on my feet / And I would still be on my feet.

Now, I ask you: Did Mother Goose ever sound that good to you?

Reprinted by permission of the publisher, Siquomb Publishing Corp.

Reprinted by permission of the publisher, Siquomb Publishing Corp.

Recommended: Every Picture Tells A Story, Rod Stewart (Mercury). Rod Stewart has a husky yet mellow voice that brings back memories of Janis Joplin. He sings like Joe Cocker and Elton John. He’s very much in the style of the musician’s musician made popular recently by Delaney & Bonnie, Joe Cocker and their respective friends. His latest album is distinguished in its selection and in its let-it-all-hangout atmosphere. ■

John Macfarlane is an associate editor of Maclean’s. 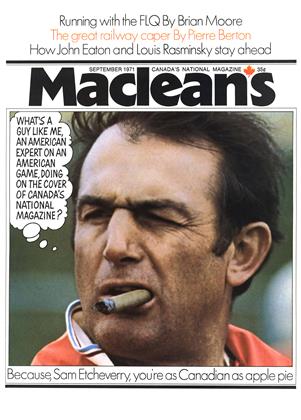