Crying brokenhearted over you

Crying brokenhearted over you

I wish I knew where my Canada is, or if it is. Since October, 1970, I’ve been trying to adjust myself to the realization that what I believed all my life was Canada — a land somehow more noble than any other, more tolerant, brave, and even true, whatever true means — never existed at all except in my head, where its sole function was to enlarge my vision of me, the typical Canadian, noble, tolerant, brave and, especially, true.

I’m feeling wretched these days for what, at bottom, is the wrong reason: I weep for me. What collapsed when my countrymen loved the War Measures Act, loved it, was my conceit that I was something special because I am a Canadian, irreducibly Canadian, a Canadian moreover who can trace lineage back to what Canadian history textbooks graciously call savages.

It has dawned on me after all these years of being thrilled by parades, Prairies, the flag fluttering at the top of the pole, twilight in Muskoka, a glittering day after an ice storm, and assorted seacoasts where the waves and rocks behave erotically with one another, that Canadians are a nasty lot, have been thoroughly, confidently, serenely rotten throughout their history, and that the War Measures Act just put the ongoing, established, lusty, truly Canadian folk festival of Hate Your Neighbor on a firmer legal basis.

Reality is giving me pain, and it would be Canadian of me to be glad of it. Canadians believe in pain; it’s good for people; there is nothing more Canadian than that concept. We strap five-year-olds in our kindergartens for the offense of being restless — stop being five! We hire police and prison guards who know 50 ways to hurt an underweight teen-ager without leaving a mark on him. We lock up the poor in mental hospitals and prisons to teach them a good lesson — stop being poor! We elevate as judges, mayors, premiers, police chiefs and prime ministers those who declare that the people will stop starving, or being young, or being Indian, or being old, or being angry, if you just punch them in the head.

There is no evidence that they are right; human beings do not seem to respond positively to being hurt and humiliated. This simple truth can be demonstrated with any small laboratory animal, if you have the heart for it. Just isolate him, keep him half-hungry, half-scared, and frustrated; or merely ask him, repeatedly, to do something which is impossible for him. In a surprisingly short time he will either become suicidal, which will take the form of total apathy or self-mutilation, or he will become murderous and attack everything that comes near him.

You can prove the same experiment another way if you happen to like small laboratory animals. Give him the diet that he requires to thrive, a varied environment that permits him to explore and develop, and some affection. What you will then have on your hands is a perky, healthy, confident small animal.

Canadians may know all about the small laboratory animals, but they don’t apply the knowledge to their relationships, and particularly their relationships with young human beings, because they simply can’t. Trusting and loving are skills people pick up from being trusted and loved, and that’s an experience that isn’t common. What lies in the heart of everyone is fear and those who have more fear than they can bear (which is just about everybody) protect themselves by being wrathful and righteous; by giving pain, they are safer.

A member of a motorcycle gang taught me that. He was describing how he once kicked a man unconscious and I said Why? and he was amazed that I didn’t know. So he wouldn’t hurt me, he explained.

Canadians are very frightened of one another, which makes them lonely, which makes them dangerous to their own kind. We put more people in prison, per capita, than any other Western society in the world. Our prisons duplicate the conditions for making small laboratory animals insane — they are full of the destruction of young lives.

The schools are perhaps the most Canadian aspect of the entire country. They have a strong resemblance to the jails, in that incarceration in them is also involuntary and joyless and the program encourages stupidity and insensitivity. Schools don’t use a method of instruction that corresponds to the natural way people learn, and thus are assured of a bumper harvest of children who can’t figure out the school game well enough to simulate learning. They therefore are designated as failures. That’s what school seems to be all about: Find the winners. The losers fall out of the boat, half-literate non-swimmers full of despair, while the winners sit there for years rowing away, robots who have been half-dead since they were eight years old.

That’s how you turn out a real Canadian, you break his heart and punish his élan. It does have its drawbacks. A few years ago Statistics Canada estimated that one out of every 10 Canadians born in 1965 would spend part of his life in a mental hospital. A mental hospital. Three years ago SC revised its estimate and reported that one in every eight Canadians born that year would be treated in a psychiatric institution. In 1970 it had to be changed again, to one in every six Canadians born in 1965 will be in a psychiatric institution some day.

It isn’t easy to distinguish mental hospitals from jails, since both likely were built about 100 years ago, both stink, and both are full of the poor. Well-to-do people don’t become insane, lucky them; instead they have a praiseworthy disorder known as a breakdown from overwork, and they are attended gently in comfort and privacy in the psychiatric wings of general hospitals.

What we’re really proficient at in this country, besides knowing what’s good for other people (which unfailingly is something unpleasant), is driving ourselves insane. Maybe the one has something to do with the other.

A careful, conservative survey of Canadian children was done over a three-year period by a distinguished group called CELDIC, the Commission on Emotional and Learning Disorders in Children. It was reported in 1970, to a massively disinterested nation, that we have more than one million children under the age of 19 in need of immediate help if they are to become functioning adults, and that they aren’t getting it. The Prime Minister wrote me that he was shocked. “One million children!” he mused. The Leader of the Opposition was also shocked, but got the name of the organization wrong.

Canadians ignore a million children in distress because they simply don’t believe it. One of the myths of the country, as entrenched as the myth about western hospitality, is that Canadians love their children. They don’t.

Back when I had this fantasy about the inherent goodness of Canadians, I thought we were coming out of the muck. I started meeting these marvelous people all over the country, great teachers, exhausted doctors, social workers even, nutty idealists who sometimes were little old ladies in tennis shoes, sometimes were impeccably groomed and scented Junior Leaguers, sometimes were bearded young guys who brought their babies. They talked of concern and change and making institutions humane, and it looked to me as though they were beginning to succeed.

So I wasn’t prepared for what happened with the War Measures Act, that it was a hit. I didn’t expect that the country would be so delighted, enthusiastic, grateful for a ruthless deed based on hatred and mistrust. I really thought we had it figured out, at last, that the cost of devaluing any man’s life is that your own life becomes a crock of junk.

The students demonstrated, of course. Being Canadian, they demonstrated — a few thousand of them at York University — for the War Measures Act. The protest against it at Toronto City Hall was poorly attended; the police took pictures of those who came.

I would have liked it on the night of October 16 if the Prime Minister had used that televised speech to say hold steady, these are black days but believe in the strength and goodness of the country, trust in the law, which is adequate, more than adequate, to round up the criminals. I wouldn’t have minded a simple prayer; the sense of God, if you can feel it, is enlarging. Maybe he could have asked Canadians to shake hands with everyone they meet for a day. That’s not naïve, that’s not bleeding heart: traditionally, the handshake is to show that you don’t hold a weapon; it is a simple, effective way to reduce fear between individuals. It works. Ask the little laboratory animals.

Instead, the great Canadian malaise, persecution of the different, has been exacerbated. On the beautiful Prairies this summer, a police car drove straight at a hitchhiker. His leap into the ditch saved his life but he was cut and bruised. While the United States was excited at the suppression of the New York Times’ reports of the Vietnam investigation, a Canadian judge stopped the CBC from airing an account of the Vallières trial, a straightforward recital of the transcripts, and it was a note in an entertainment column.

In the wash of vengeance that has followed the War Measures Act, Canadians have an opportunity to excel on a world basis at what we do best, which is to hurt people. An international organization, the respected League for the Rights of Man, inspected a Quebec prison and reports that it is “scandalous and inhuman.” The investigator claims that it is worse than the infamous jails of Algiers, where the torture was spectacular. So Canada is making a mark for itself, after all.

June Callwood is a writer and social activist, distinguished for her work on behalf of the mentally ill and the young. She is founder and director of Yorkville Digger House and a vice-president of the Canadian Civil Liberties Association. The author of Love, Hate, Fear And Anger, an analysis of human emotions, she is currently working on a history of Canada for Doubleday. 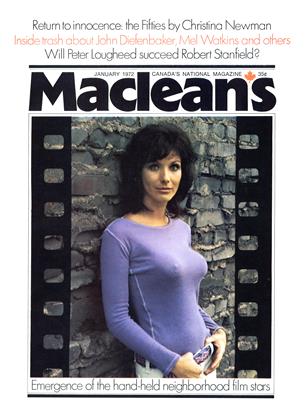