The Electorate And The Leaders: A Painful Choice In The Politics Of Compromise Peter C. Newman October 1 1972

When the leaders of the federal parties are out soliciting votes these mellow weeks of autumn, wearing themselves hoarse on portable platforms in the barren reaches of shopping plazas, voters are doubtless finding that their impassioned rhetoric manages to skirt most of the real issues that affect our lives. Politicians on the stump tend to grow vague .as though they were made uncomfortable by specifics, like maidens of 50 confronted by intimations of uncontrollable passion. The Canadian political ideal remains a polite “centrism,” with ideologies moving fractionally to the left or right, depending on the persuasiveness of claims made for the popularity of competing positions. Instead of raising genuine concerns, what Pierre Trudeau, Robert Stanfield and David Lewis seem to be saying is “Gamble on me that I can deal pragmatically with issues as they arise.”

The cross-country survey of Canada’s current political mood by William Cameron, which begins on the next page, indicates that most Canadians don’t believe the outcome of this election will touch them very much. Too many voters have become unresponsive to the existing parties. In the new political awareness slowly taking hold in this country, it is increasingly the people themselves — not the politicians — who are attempting to understand the priorities of our national life. That’s why the story of this election may turn out to be as much about the making of an electorate as the making of a prime minister.

During its 67 years of publication, Maclean’s has never taken sides in a federal election since our mandate as Canada’s national magazine includes responsibility for reflecting a broad spectrum of political views and opinions. The magazine has consistently expressed the belief that the measure of commitment and integrity individual candidates bring to the political wars is far more important than the banner under which they travel. This time out the tra-

dition seems a particularly important one. It has seldom been more appropriate to advise voters not to cast their ballots blindly according to partisan loyalties. In the past four years, the three main parties have become more and more dinosaur-like — organized appetites for power, dedicated to selfpreservation and little else.

Pierre Trudeau, who swept into office as a daring reformer fronting a party full of “new guys with new ideas,” now behaves like a computer printout of his former self. The Liberals are up to their old familiar tricks of calculatedly buying off blocs of voters, trying to control Quebec as though it were a fiefdom and in general behaving as if Mackenzie King were alive and well in the East Block. The Conservative Party, so recently a coalition of agrarian protest and Upper Canadian Toryism, has turned into an odd sanctuary for political eccentrics. Robert Stanfield, far from resolving the conflicts between John Diefenbaker’s populism and Dalton Camp's sophistry, has turned himself from the “man with the winning way” into the man with the slogging soul. The NDP, once the most democratic of parties, has through its treatment of its Waffle wing become the voice of big-union bossism, leaving the left dispirited and disaffected. In his blustering attacks on “corporate welfare bums,” David Lewis apparently hopes to blow himself a smoke screen that will hide the disenchantment in his ranks.

About all the voter can do in this unhappy situation is to vote for the candidate in his own riding he feels is most aware of what’s really going on in the country; what’s really important to the region he comes from; what’s really in the minds of the people he wants to represent. Who wins on October 30 may turn out to be less important than what wins — what concept of the Canadian future, what qualities of leadership, perception and courage emerge from the coaltion of men who go once again to Ottawa to wrangle away our lives. ■ 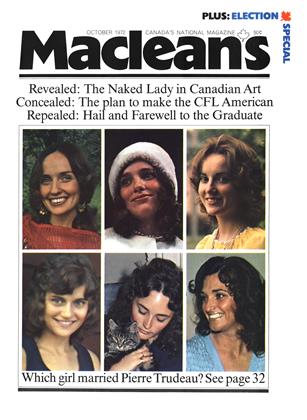