I have discovered a peculiar new person on television. He’s tall and skinny, with a high mincing lisp and a fondness for flowing scarves and lavender suits. This weirdo, in Archie Bunker’s phrase, is a witty gay blade who inhabits Grant’s Tomb, the neighborhood snug which provides the location for ABC’s new kitchen sink comedy,

The Corner Bar, raucous, crude, pie-in-the-face slapstick, is one of the radical new nitty-gritty comedy shows sweeping over American television in the wake of the phenomenal success of All In The Family. I like it. But then I liked The Beverly Hillbillies, too, so you know where I’m at. The barflies are a motley and improbable group of amiable drunks — a beerswilling cabdriver, an alcoholic junior executive, the weirdo and Harry the bartender, who employs a militant black cook and a melancholy waiter of European extraction. The show has the unmistakable stamp of New York, a grubby, hilarious eccentricity; it’s a fast patter of puns, jokes and insults with a lot of camping around in bizarre costumes. Where I live, The Corner Bar comes on at 7.30 p.m., from which I gather that booze and homosexuality no longer pose a threat to the morals of American children. (The show is broadcast at 8.30 p.m. in other parts of Canada on ABC.) The best thing about The Corner Bar is the warm, homey cheerful feeling it leaves you with, exactly the same feeling you get sitting in a comfortable pub. I wish real drunks were so funny.

I also wish The Super was funny. Starring Richard Castellano, the fat thug from The Godfather, as a grumpy Italian superintendent of a rundown New York apartment house, The Super is a slum drama produced by the Meathead, Rob Reiner. The super, ugly and impassive, has two sullen children and an expressionless wife whose heads he keeps threatening to knock off. In their search for authenticity, the writers forget that bad-tempered Italians are not inherently funny; the wit is feeble, the staging ponderous and the cast the usual collection of nuts found in unsuccessful situation comedies. Too bad, because The Super is an important show, an indication that television is at last beginning to catch up to people. Would Doris Day, weighing in at 350 pounds, slouch into a chair, undo the top button on her trousers, emit a mighty belch and glug beer from a can? The Super does. Like The Corner Bar and All In The Family, The Super is about ordinary, down-to-earth working people who scratch and swear and drink and get mad. They talk the blunt, flat slang of the American streets; their humor is vulgar and their passions are common. They’re plain joes with not much money and no style, but they’re tough, clever and emotional. Hooray for them!

MASH brings something altogether new and startling to television — sex. I haven’t seen Hot Lips naked in the shower yet, but so far the TV series is more delightfully lewd than the movie. The shock of explicit eroticism is enough to knock you out of your seat; suddenly everything else on TV looks incredibly old-fashioned and Victorian, like Julie Andrews or Anna And The King Of Siam. Violence is out this year, sex is in, although MASH (CBCFriday, 8 p.m.) has some discreet blood and gore to give it a little added zest.

There’s something terrifying, a sense of suppressed violence, about All In The Family. I get the feeling that if

Edith were just a little less innocent, Archie would haul off and smash her across the face. Carroll O’Connor is a superb actor, tightly coiled, threatening with a faint reflex of his fist. You can see the fear flash through Edith’s eyes as she draws back. The show is supposed to imitate the BBC’s ’Til Death Do Us Part but it has none of that brittle English flippancy; its real ancestor is the bloody hard-hat movie, Joe. Maybe it’s this barely controlled hatred that gives All In The Family its enormous fascination; hatred is a feeling any married person can recognize immediately. You might as well laugh about it.

People take All In The Family very seriously, as if it were real life. They recount Archie’s best blunders with delight, memorize his put-downs and they call their own wives dingbats. I get the creepy feeling that the people who laugh loudest are not laughing at Archie, they’re laughing with him, and they see him as a justification for their own way of life. Bunker’s prejudices have triggered an emotional response in America’s heart which has caused moralists to cry out against the show. I admit I feel a certain revulsion. I find Edith’s self-abasement and servitude painful; Archie’s cruelty is often more annoying than funny. A recent episode which raked Edith over the coals for a long-dead love affair was a frightening exercise in personal humiliation; it left me with a depressed, unpleasant feeling.

I asked one man why he thought All In The Family was so popular. “Why,” he said, “it’s about a man!” Male chauvinist piggery has obviously lured a huge male audience away from football games. It’s the only show on American TV that deals with marriage. Since the end of The Honeymooners, TV has been swamped with swinging singles — widows, divorcées and those toothy, emaciated professional virgins called bachelor girls. Not any more. I am told that in some new comedies husbands and wives actually sleep in the same bed! Undressed!

Maude is my favorite of all the new shows. (CBC, Thursday at 7.30 p.m.) Played with great style by Beatrice Arthur, Maude is the Great American Mom. Hard-nosed, pigheaded, aggressive, neurotic, she combines all the most objectional qualities of Eleanor Roosevelt, Lady Bird and Sophie Portnoy. A woman in the process of destroying her fourth husband, Maude is funny in a horrifying way.

The new comedies are radical because they use real stage actors, not dried-up old movie stars or nightclub entertainers who are speechless without a cue card. They are really little half-hour stage plays with nothing more than a good script, a cardboard set or two, some lights and an audience. This theatricality makes them look stiff and artificial, but it also liberates them.

Maude and MASH and All In The Family are serious comedies dealing with adult emotions and entanglements. They have brought a thrill of Broadway excitement to TV; they have also brought the gutter language and ribald innuendo which have been the backbone of stage comedy since Shakespeare. They’re a reminder that good satire, from Rabelais to Swift, is grotesque and usually obscene. ■

As this issue went to press we learned that The Corner Bar and The Super had been cancelled. 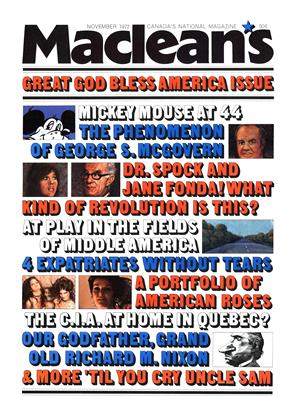