Just before I left for Cyprus the first time nine years ago I ran into the English poet Louis MacNeice in a pub in London. “Glorious,” he said. “Wonderful place. Now listen, and I’ll teach you the only two Greek words you’ll need there.” I listened and he taught me to say, “Den berazai” — “Never mind.”

Old yellow dog of an island lying in the sun, tail in the armpit of Asia Minor. Not one of your neat, white Greek islands easily encompassed and artistically arranged: nothing so easy. A big landscape ridged with mountains and littered with old barbed wire from old wars and patrolled by UN soldiers preventing new ones: a compendium of memories and contradictions. Never mind.

If you’re flying to Israel from one of the Arab countries, you’ll change passports there. If you’re getting married outside Israel’s religious laws, you’ll marry there. If your husband is posted there with the Canadian UN forces, you’ll get a pass there. Depending on where you land, it may strike you wrong. I am not fond of the port of Limassol, but neither was Richard the LionHearted. It’s a seedy town, with no patchouli scent of romance, and the essential industries that surround it are unglamorous. Never mind. Take your courage in your hands and drive around the switchbacks of the west coast, through the vineyards of Tylliria in the Paphos district, where Aphrodite was washed ashore, Paul preached, and every corner gives onto fresh delight or mystery: black gypsies gathering grapefruit, the ruined capital of an erstwhile city state, a Roman theatre, a group of children selling glaucous maroon wild tulips by the road.

Or take a taxi to Nicosia, cutting up from the stony south coast through the dry central plain to the walled city that the House of Lusignan, which collected

Mediterranean islands in the 12th century, endowed with cathedrals, and the Venetians invested with thick stillstanding walls. There the great Gothic cathedral of St. Sophia has been a mosque for 400 years. Its whitewashed interior is canted by its furnishings and carpets toward Mecca, and there, in the angle between the lines toward Mecca and Jerusalem, lies the appeal of the island: you are disoriented when you get there, you find yourself in a nexus of old feelings.

Outside the cathedral, street vendors sell thick-skinned oranges, Indian custards, kebab, Armenian pizza, nuts, bananas, strawberries. At night, the scent of grilling lamb from thousands of charcoal fires scents the air and competes with the ghostly cry of the muezzin from the minaret. One doorway is Gothic, one Norman, the balconies are Venetian, Shakespearean, or perhaps Turkish. This Muslim shrine: how curiously Chinese. The Turkish bath is a tiny Byzantine church which has sunk below ground level. No baksheesh, old woman: this country has a higher standard of living, and more cars per capita, than almost any in the Middle East. Stand in the Ford showroom window, look at the modern apartment buildings with marble floors, and you will see.

What country? Hard to remember sometimes. Cyprus is frequently left off maps and mostly recalled for its wars and the fact that its president is Archbishop Makarios, which makes him an ethnarch. It is, like Ireland, prone to Holy Wars. The Irish contingent of UN forces gets on famously there.

It is the third largest island in the Mediterranean, and lies 44 miles south of Turkey, 65 from the Israel-Syria coast. It has changed hands throughout history like a silver dollar, and is famous for copper and wine. Antony gave it to Cleopatra for a wedding present, Richard the Lion-Hearted owned it for a while, then sold it to the Templars and Hospitallers; long before that the Phoenicians logged off the central plain, and as you drive through it you can still see copper tailings purer than a modern refinery can smelt.

I lived within the circle of the yellow walls of Nicosia for a year, and loved it. An international capital (pop. 114,000) where fat men mold copper pots and thin men make boots out in the street. The city is now divided into Turkish and Greek sectors, but foreigners pass freely, and UN Peace operations have brought money and sophistication to the town. In summer, there are outdoor cinemas and nightclubs, there are truly Eastern clip joints in the back streets, and goods from all over the world in the bazaars.

But Nicosia is a landlocked town. To swim you have to go over the pass through the northern mountains, paus-

ing always for a view of the Anatolian mountains gleaming over the Homeric sea. The north-coast port, Kyrenia, has a round little harbor much beloved of English sailing clubs, a castle that houses treasures recently unearthed from under the sea. All you have to remember is that outdoor cafés with wooden chairs are cheaper than the wrought-iron ones.

On either side of Kyrenia are 50 miles of beaches. White-sand inlets where lilies grow in September, and kind men grill fish and chill beer for summer swimmers.

The coastal plain here is tiny — a mile or two wide in places — but well watered. Cultivation is frantic: lemon groves, carob and olive orchards, market gardens. This is Lawrence Durrell’s Bitter Lemons country, and the view from his village of Bellapais is stupefyingly beautiful. And under the Tree* of Idleness, old men still play their fiddles on long summer evenings. The English loved this coast and left their mark — low slope-verandaed bungalows which they put up also in Canada and India.

The Greek coast is the eastern one, toward Famagusta, where 10-story apartment hotels almost put the white sand beach in shade. In summer, the thick salty sea is warm as consommé, and Teucer’s old city of Salamis has been excavated among groves of pine and giant fennel. The religious establishment was recently shocked to find that St. Catherine’s Prison, on excavation, proved to be an archaic tomb complete with the skeletons of sacrificial horses.

Old Famagusta is Othello’s town, well known. His lion of Venice still guards the sea gate, his name is a brand of wine (good) and of ice cream (untested). Inside, at night, the ruined lacework of 100 Gothic churches gleams in the moonlight. Most of the rubblestone was sent to build the Suez Canal. The moat is full of trees, even in summer astonishingly cool. You can look up and see a cannonball stuck in the walls.

Old yellow dog of an island, too much for a week or a weekend. But not everybody likes guidebooks. Never mind. They no longer hunt with leopards as in the palmy days or give rubies as party favors, but they still cook, they still eat. At the restaurants and cafés you look at the menus and think, goodness, $2.50 a bottle of wine, but the wine comes with what is referred to as a meze, a meal of little dishes, or big ones: plate after plate of grilled fish, broiled lamb, exquisite fresh fruit and vegetables. You never drink without eating there, and you never, except in the poorest places where they aren’t expecting company, eat badly. If a Cypriot doesn’t head for Toronto he goes to Europe and often into the restaurant trade. He makes his pile and comes home. I had French

friends there who made a hobby of searching out eating places. We did well.

In the fall, when the figpeckers migrate from Europe to Africa, villages along the migration route turn themselves into outdoor restaurants. Boys catch the birds on Shakèspearean limed sticks. Battalions of toothless old women pluck them. They are boiled outdoors in cauldrons and served by the dozen on rice that is cooked in thebroth. In the monasteries and convents, bona fide pilgrims can stay for three days without payment. I went to one on a donkey, to see an ikon of St. Christopher with the head of a dog.

In the cafés, men still smoke hubblebubble water pipes — but don’t believe the soldiers when they tell you they have hash in them. Both Greek and Turkish Cypriots are struggling to be modern and western but not decadent. The trend is to get away from everything lazy and oriental into the kind of 19th-century industrial toughness we have given up.

In the villages, men still play bouzoukis and fiddles late at night, in addition to the laouthi — a kind of lute imported first by Richard the LionHearted’s Blondel. June weddings give rise to week-long celebrations, with long narrative improvised folk songs called chatista.

In the remoter regions, girls still tie rags on bushes to court the good wishes of Aphrodite. A crazy foreigner’s car is cause for curiosity. A woman is making cheese in her courtyard, boiling it in whey and mint. She plucks your arm and takes you into her house and says, “Kopiaste” — sit down and share.

In the coastal towns, you can rent water skis and scuba diving equipment and, looking down from the balcony of your white-towered hotel, watch a shepherd trailing his itinerant goats across the vacant lot beside the yacht club. Every culture has had a hand in this one, and when you are in it, time stands still. ■

How to go, where to stay

You can get from Toronto to Nicosia on an Air Canada 22-to-45-day excursion for $533 return; and there are continual charters for archaeologists and Cypriot Canadians visiting home. If you're already in Europe in the summer, there are cruise ships from Marseille, Genoa, Venice, Athens and Brindisi; deck passage is comfortable. You don’t need a visa (Cyprus is part of the Commonwealth), and if you have a valid Canadian driver’s license and a tourist permit you can rent a car for about $7.50 a day. Hotels in Nicosia: the Ledra Palace ($10 a day, single) and the Saray, in the Turkish quarter, ($5 to $7). The major resort areas, Famagusta and Kyrenia, have sprouted a forest of new, posh hotels to go with the old colonial ones. Make sure of air-conditioning in the summer. It Is hot over there. 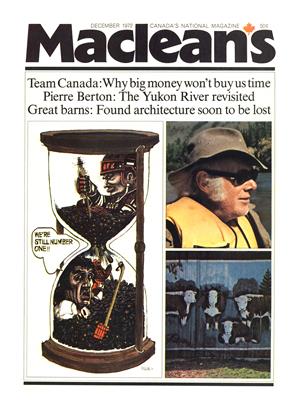