It was Anne Murray who drew the phenomenon to my attention. A year ago at this time she was in Toronto accepting a Juno Award as Canada’s female vocalist of 1970. Junos are the invention of RPM, the Canadian music industry weekly which has been celebrating the achievements of this country’s musicians thus for seven years, although it wasn’t until last year that the awards were designated Junos as a tribute to Pierre Juneau, the visionary chairman of the Canadian Radio-Television Commission and the father of the Canadian-content quotas that have so stimulated the Canadian music scene. Among the other recipients that night were Stompin’ Tom Connors, voted the year’s top male country vocalist; Brian Ahern, whose labor on Annie’s behalf earned him an award as record producer of the year; and Gene MacLellan, who was named the year’s top composer for Snowbird which, you’ll recall, was Annie’s first big hit. Well, if it escaped the notice of any of the 600 industry people who were gathered for the occasion that these four musicians had something special in common, it was very much at the forefront of Annie’s thoughts as she stepped to the microphone,

Juno in hand, to say her thanks. Because what she said, after she said “Thanks,” was “The Maritime mafia has just scratched the surface.”

Maritime mafia? Sure, it was a joke, but think about it. In addition to Anne Murray, who can hardly be overlooked as Canada’s female vocalist of 1971, and Stompin’ Tom Connors, whose songs about places like Sault Ste.

Marie and Wawa have made

him something of a nationalist’s folk hero, and Gene MacLellan and Brian Ahern who are still writing and producing hit records — in addition to these, the airwaves over Canada are frequented these days by such other Maritime musicians as Harry Hibbs, the Newfie troubador who probably sells more records in Canada than Anne Murray and Gordon Lightfoot put together; Don Messer who was the first Canadian to sell a million records and who, in the company of Marg Osborne and Charlie Chamberlain, appears weekly on the popular television show bearing his name; and a dozen others (including a rock group called Pepper Tree) who can be seen from time to time on the CBC’s Countrytime and Singalong Jubilee, which just happen to be produced in Halifax and which together have a weekly viewing audience of 2,817,000. Maritime mafia, indeed. If I were a singer looking for a break I'd be packing my bags for Halifax.

Stevedore Steve Foote is a native of Saint John, New Brunswick, who used to bum around with Stompin’ Tom Connors in the days before either of them had seen the inside of a recording studio. For most of his 35 years he’s worked as a longshoreman, truck driver, lumberman and potato picker, but today he’s one of the new stars of Maritime music, famous down home for songs like Minto Miners: Some

folks work and earn their bread / Where the sun is hot and overhead / But when a Minto boy becomes a man / He don’t get to see much of the sun again / ’Cause there ain’t no sun at the bottom of the Minto mines. So pleased was the mayor of Minto with that song, he gave Stevedore Steve an award, a chunk of Minto coal on a plaque with this inscription: “Our thanks to Stevedore Steve for his hit song Minto Miners.” He has been similarly honored by Joey Smallwood for a song called Newfie Screech and by the Nova Scotia Department of Trade and Industry for another called Giant MacAskill. I know all this because Stevedore Steve came to see me a few weeks ago carrying his three trophies and a pile of newspaper clippings in a cardboard box.

I grew up with Don Messer in the days when Don Messer’s Jubilee was a radio program. I’ve stomped with Stompin’ Tom and I’ve shared some part of the pride millions of Canadians feel in the achievements of Anne Murray, who manages to be a nice girl from Springhill, Nova Scotia, even under the hot lights in Los Angeles. But it wasn’t until I met Stevedore Steve, his cardboard box of testimonials under his arm, his young wife Gini in tow, that I began to appreciate Maritime music for its most ingratiating quality: its lack of pretense. He laid out his trophies on my desk and handed me clippings from such newspapers as the Fredericton Daily Gleaner - TOWN HONORS STEVEDORE STEVE, SUCCESSFUL SONGWRITER — and when I’d looked it all over he told me that what he wanted from me was just an “honorable mention.” It was direct and, in contrast to the way big-city music biz people do their courting, refreshing.

There is a sense in which Maritime music is the most authentically Canadian popular music this country produces. Rock is a borrowed medium. But, like the music they make in Nashville (to which it is so similar but yet different), the music of the Maritimes grew out of the pioneer experience of the immigrants who settled North America when the only way to get here was by boat. It is a simple music, created by and for a rural people who do not share urban Canada’s misgivings about identity. Disdainful of the values of the city and therefore unmindful of the international cultures of New York, Los Angeles and London, they know who they are — Minto miners, Halifax longshoremen, Newfie fishermen, Prince Edward Island potato farmers. It is not, I confess, my kind of music, city-bred and buttered as I am. But listening to Stompin’ Tom Connors sing songs like Bud The Spud I catch glimpses of a way of life so attractive and in the urban scheme of things so embattled I can well understand why its spokesmen should, like Anne Murray, perceive themselves as a brotherhood.

Willie Dunn (Summus 50,001). Willie Dunn is a young Indian folk singer, songwriter and occasional film maker whose first album fills a terrible void in Canadian music. It is impossible to say how much momentum protest music gave the civil rights movement among young white middle-class Americans in the Sixties, just as it is impossible to say why their Canadian contemporaries have been so indifferent to the plight of our native peoples. Perhaps the music of Willie Dunn, powerful and haunting, reminiscent of Bob Dylan in his Blowin’ In The Wind period, will start something. This album belongs in every home in the country. ■ 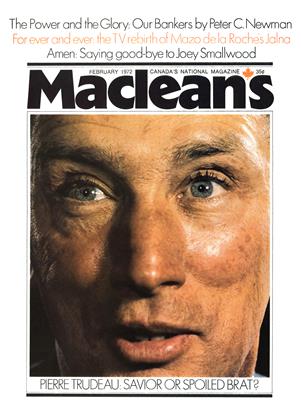