Walt Disney’s Fantasia looks about as harmless a movie as Hollywood ever made. It was released in 1940. For 30 years it was the least popular of all Disney films. Then the young, leaving no way unturned of getting stoned, began using Fantasia to trip with. It became a fad. Since 1970 Fantasia has made two million dollars.

When we cleaned up the theatre where I work in downtown Hamilton after a day of Fantasia, the men’s washroom yielded three spoons, one broken hypodermic needle and splotches of dried blood. Glue sniffers left their bags and tubes in the orchestra. Others of the post-Woodstock generation flicked their lit cigarettes from the balcony onto people sitting below. It isn’t uncommon — even when the film is less “trippy” and stupefyingly fashionable — to see kids at the candy bar, looking happily demented, scarcely able to walk, swaying back and forth in a daze, fascinated by the multicolored packages. If a Crispy Crunch wrapper or Smarties box turns them on, small wonder they like Fantasia.

It is this type of Canadian youth that Allan King’s Come On Children depicts. After interviewing nearly 300 young people, he hired 10 of them (between the ages of 14 and 20) at $100 a week each for 10 weeks, and moved them to a farm near Newcastle, Ontario, where he and cameraman Bill Brayne filmed their activities. They bought their own food and lived as they pleased.

Midway through the film the camera pans across the farmhouse kitchen. There are bottles of cream soda pop with cigarette butts in them. Crusts of bread are scattered across the floor. Processed cheese slices have become discolored and hard. Canned goods have been opened, half used and left standing for days. There are sticky gobs of jam and peanut butter in the unlikeliest places. Once frozen pizzas have turned soggy and moldy. Milk is turning sour. Dirty dishes and pots are everywhere. It’s the sort of household where police are called “pigs.”

The external mess is matched by a psychological one. Kenny is 20, the oldest of the group. He’s fathered a child (named Justin) and abandoned his son along with the mother, who is now on welfare — a nameless girl he refers to only with contempt. Now he sleeps with Sharon and nothing worth the word “love” passes between them. She became a mother shortly after arriving at the farm. She didn’t want a child, but there it is. If she tires of it she’ll put it in a foster home.

Ninety minutes pass. Not once do you hear a new or different idea. These kids aren’t the originators of anything. They wear their ratty hair, sad-sack clothes and antisocial attitudes like an ill-fitting costume rented for the duration of their adolescence. They tell you they live as they do because they live in despair. But they live in such an uncreative, unimaginative way as only to confirm their desperation. It is Allan King’s special strength as a documentary film maker that he explores a subject without exploiting it. The film shows a clear awareness of the difference between sentimentality and compassion. Watching Come On Children is like attending the last rites of the hippie lifestyle. It amounts to taps for the generation that spent its youth passionately, with intoxicated profligacy, and that dreads adulthood as a drunk does a hangover.

Teen-agers in the Fifties were spared the embarrassment of living in a limelight. Government commissions didn’t study them. Manufacturers didn’t cater to them. Film and record companies didn’t pander to them. They had no Woodstock. They had no Altamont. If you don’t fly high, you never crash. It would be inconceivable for a Fifties youth to claim that getting smashed was a “religious experience” the way that LSD proselytizers did a few years ago. The young of the Sixties were more pretentious and melodramatic. They put on wax wings and flew straight for the sun. They are now everywhere in tattered disarray, nursing their wounds and counting their casualties.

Near the end of Come On Children the kids have a parents’ day. An awkward “generation gap” scene occurs with everyone speaking lines that seem borrowed from an old television series. The kids are generally sullen. Their characteristic posture is an arrogant slouch. The parents are soulsearchers: “Where did we go wrong?” After they have gone, someone shouts, “Are there any parents left?” and everyone in unison shouts “No!” “Let’s get stoned!” the first kid shouts again, and everyone cheers. You look at the parents and you

realize that it would take far more resourceful people than these to create good home environments. You look at the kids and you realize they aren’t going to make it either. For them, freedom consists of despising every form of authority but never being critical (perhaps not even being conscious) of the tyranny of their own peer group. Which may well be the most enslaving of all tyrannies.

In Come On Children Allan King has made a moving, melancholy film of comparable importance to his famous Warrenüale. Dust is beginning to settle now on the Sixties, but this film will be one of its durable documents. It was expected of teen-agers in the Fifties that being young they would be foolish, but mostly in ways that mercifully could be forgotten. Young people of the Sixties were bent on being a conspicuous generation. They wore their hearts and neuroses on their sleeves. So it is fitting that Come On Children should be their tombstone.

Recommended: The Hospital will leave you in stitches. The screenplay by Paddy Chayefsky, who has seen better days in Marty, The Goddess and The Bachelor Party, is only fitfully funny, but George C. Scott and Diana Rigg are a delightful comedy team. Where the author’s inspiration fails (or, when pressing a social problem, merely flails), their own sense of good taste and comic timing prevails to cure whatever ails the uneven script. Scott’s performance is one of his best. He seems to realize that he alone can carry the film and derives great satisfaction in doing just that. Like Garbo, Scott seems to prefer mediocre screenplays so that his performance in a film is often its only saving grace. ■ 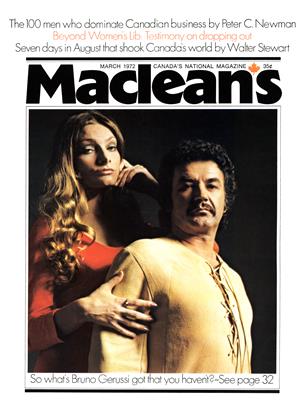