When Ezra Pound first read his sestina, Altaforte, in a Paris café, they say the room shook. The only time a room ever shook for me was the afternoon during a conference of young prose writers at the University of New Brunswick, when Rudy Wiebe read Where Is The Voice Coming From? After Wiebe finished his story, a complex rediscovery for our time of an obscure Indian rebellion in Saskatchewan 75 years ago, the room was hushed as though everyone had been stunned. As indeed we had. Voice is richly layered and orchestrated, haunting, absorbing: one of the finest stories I’ve encountered.

In the babble over coffee later, several editors asked for the story. David Helwig won, and it appears in Fourteen Stories High: Best Canadian Stories Of 1971 (Oberon, $5.95 cloth, $2.95 paper) along with others by the likes of Gwendolyn MacEwen, D. O. Spettigue, Phyllis Gotlieb, George Bowering, Marian Engel and Alden Nowlan. The book offers a good sampling of what Canadian story writers, especially the younger ones, are up to these days. Fantasy, humor, ecological soothsaying, sexual uncertainty and versions of Indian myth take their place beside the usual Canadian realism. None of the stories is less than competent, and several are excellent, a tribute to the judgment of editors Helwig and Tom Marshall.

Ironically, though hardly anyone publishes Canadian stories these days, the short story is the form in which Canadian fiction first achieved international quality. Morley Callaghan, Ethel Wilson, Sinclair Ross and Margaret Laurence can bear comparison with anyone now working in English, and younger storywriters like Dave Godfrey, Hugh Hood and Alice Munro continue to sprout from the tundra.

Hugh Garner is of the Callaghan generation, and his twelfth book, Violation Of The Virgins (McGraw-Hill Ryerson, $7.95), is also his fourth collection. Tough and blunt, traditional in form, Garner’s stories reveal a preoccupation, unusual in Canada, with the lives of the downtrodden, the oppressed, the humiliated.

Like Garner, Hugh Hood is fascinated by the teeming fecundity of human life, and convinced that there are realities outside his private concerns. The best stories in The Fruit Man, The Meat Man And The Manager (Oberon, $5.95 cloth, $2.95 paper) present themselves as objective reports of lifestyles quite independent of Hood, and even the worst stories tend toward triviality rather than self-absorption. The book is uneven, but strong. At 43, Hood is still growing as a writer.

Norman Levine is five years older, but he stopped growing long ago. Why are nearly half the stories from One Way Ticket (1961) reprinted 10 years later in 1 Don’t Want To Know Anyone Too Well (Macmillan, $6.95)? Whÿ does Levine compulsively retell the same stories, presumably based on the same autobiographical incidents, in almost the same

words? Surely things have happened to him other than the English girl at McGill, the poverty in Sussex, the artists’ warren at St. Ives.

Austin Clarke, says his publisher, is “the only important writer who explores black-white relationships in Canada.” True enough, and one wants to admire him. But his most recent novel, The Meeting Point (1967), is not admirable. Because the characters remain inert, the plot is melodramatic rather than powerful. The nature of my discontent became clear in When He Was Free And Young And He Used To Wear Silks (Anansi, $7.50 cloth, $2.75 paper), which contains several stories featuring characters from the novel. West Indian immigrants seeking the pot of gold in Canada are embittered to discover that in this brave new country they do not easily become rich, nor do they magically shed the stigma of their color. White people are racists everywhere. But that is not a simple truth, nor is it the only truth even in the life of a black immigrant. In some of his new stories, however, Clarke displays much greater moral complexity. A black man rages against both races, against the existence of race and class, and against his white liberal wife. When he then reveals to his uncomprehending black friend the poem he has written to her (“Time has no gun over love and you”) we are permitted entry into a poignantly multiple human predicament. Clarke’s blacks become real, and so, at last, do their agonies. And at those very points, Clarke becomes an interesting writer.

100 Caricatures by “Aislin” (Terry Mosher), (Reporter Publications, $2.95). Though not as well-known a cartoonist

as Duncan Macpherson (Toronto Star) or Len Norris (Vancouver Sun), Terry Mosher is certainly in the same league as these editorial-page wits. This is his first book — compared to 10 by Macpherson and 20 by Norris — but then he’s only 29. Working out of Montreal since 1966, mainly for the Montreal Star and Maclean’s, Mosher has a pen that portrays the powerful of Quebec and Canada with strokes that range from the gently mocking to the bitterly contemptuous. He has little time for comforting cartoons in a world he views as generally uncomfortable for the majority of people. If you’re interested in wry smiles and knowing snickers rather than belly laughs and empty giggles, Aislin is for you. — RDW

Galt, U.S.A.: The “American Presence” In A Canadian City

by Robert L. Perry (Maclean-Hunter, $3.25). In his eminently readable case study of U.S. economic penetration into Galt, a medium-sized industrial centre in southwest Ontario, Perry goes behind the economic nationalists’ scary statistics in an intriguing examination of some of the people who are affected by those frightening take-over figures. Based on his 1971 series in The Financial Post, Perry’s main characters are businessmen. But don’t imagine they make for dry reading: his journalism is vibrant. And there’s a studious avoidance of rhetoric: Perry sets out the facts (pulling few punches) and lets his people spell out the implications for Galt — and Canada. Galt, U.S.A. should be a text for every university and high-school Canadian history and politics course. It’s fuel for nationalists, a challenge to continentalists and compulsory for every Canadian. — RDW ■

Don Cameron teaches English at the University of New Brunswick 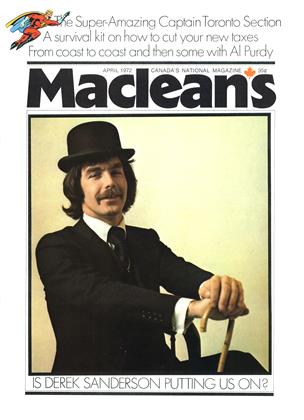