The only people who will find unalloyed joy in Cabaret are those who have forgotten or never read Christopher Isherwood’s novels The Last Of Mr. Norris and Good-bye To Berlin. Seen after a leisurely meal with heady wines by people wanting light, slightly tart entertainment (they want a film that demands nothing of them; they in turn will demand nothing much of it) Cabaret is serviceable, nothing more. When it isn’t busy being a musical, however (and its musical numbers are few), Cabaret is just another example of a silk purse being turned into a sow’s ear.

Isherwood’s novels were printed separately in the 1930s but collected under the title The Berlin Stories in 1935. The first adaptation of the material — John van Druten’s I Am A Camera starring Julie Harris — opened on Broadway in 1951. Cabaret is a musical version oí 1 Am A Camera, twice removed from Isherwood’s original script. Unlike My Fair Lady, which managed to be a delightful musical and a worthy transformation of Shaw’s Pygmalion, Cabaret is a superfluous reworking of material that serves no purpose. What is worse, it falsifies the material it claims to be based on.

The Berlin Stories may be illadvised material for a musical (though the people who make musicals don’t seem to think anything is beyond adaptation), but anyone risking it should at least be true to the tone and values of Isherwood’s books, whatever liberties they take with the plot. As an adaptation of Isherwood, Cabaret is as timid and sentimental as any of the Hollywood film versions of “controversial” stageplays — Tea And Sympathy, Cat On A Hot Tin Roof — that came out during the 1950s. The film goes so far in its distortions of the original characters as to create love scenes between Sally Bowles (Liza Minnelli) and “Herr Issyvoo” (Michael York) though the book makes it clear their friendship was the affinity of a down-andout prostitute and a homosexual.

At some point in the musical’s construction the writers seem to have realized that The Berlin Stories was unpromising material for a Broadway show and thereafter altered or added whatever they believed would make it more commercial. There is a Jewish girl named Natalia Landauer in the original book, and she left for France before the Nazis came to power, got married and lived well. In Cabaret, she and an invented gigolo boyfriend are depicted in an agonizing Jewish tragedy: dare she marry him in the last shaky days of the Weimar Republic? Dare he reveal to the authorities that he too is a Jew? The non-musical scenes in Cabaret are long, stretching banalities. The mediocrity of the script barely distinguishes it from Love Story. The book dismissed Sally Bowles’ abortion as quickly as she did herself. The musical lingers over it. She and the young Isherwood argue about it. He promises to marry her. What we get in Cabaret is a literary classic translated and bowdlerized by second-rate minds.

The songs are showstoppers (but then it wouldn’t take much to stop this show) and Joel Grey’s performance as a seedy master of ceremonies is beautifully executed. He stands out because we only see him in musical numbers and they’re the best part of the show. Everyone else is stuck with acting out subplots with thankless lines. Michael York as the young Isherwood has such a thinly written role he doesn’t even suggest being interested or capable of being a writer. Liza Minnelli as Sally Bowles attacks every scene so over-zealously it suggests she believes that the only way to act a part is by overwhelming it. Marisa Berenson and Fritz Wepper as the ill-fated Jewish lovers are little more than cardboard cutouts. The fault, as always, lies in the script. Every change in the characters from the original book to the musical is in the direction of sentimentality. The musical’s Sally Bowles is simply an insecure girl, crestfallen when her father fails to keep an appointment with her, fussy about knowing who’s sleeping with whom, callous and loud when in the presence of German aristocrats — all of which is invented, and it’s a bad invention done to make Sally seem more recognizable and awkwardly appealing to American audiences. Isherwood’s Sally was more vulnerable and less neurotic. They never shared the sexual favors of a baron, as the movie says.

Perhaps as long as you tap your toes and don’t ask any questions, Cabaret may seem vigorously stylish. But the question I ask of it is this: if as a musical version of The Berlin Stories it is an uninspired travesty, what good is it? Many critics who regard Cabaret as “brilliant” laughed at Luchino Visconti’s The Damned — especially at Visconti’s equation of sexual aberrations and the rise of Nazism. Yet Cabaret is built on the same moral premise and repeatedly intercuts scenes of “decadent” nightclub life with Nazi armbands and acts of terrorism. It appears that musicals are judged by different standards: it doesn’t matter what nonsense you’re saying as long as you sing it.

Recommended: Millhouse: A White Comedy isn’t a blueschaser. It’s too painfully funny to make one feel light-spirited. Director Emile de Antonio (who made Point Of Order using television tapes and films of Senator Joseph McCarthy) here turns his attention to President Richard Nixon and transforms documentary materials into a scathing satire, even more barbed and devastating than Philip Roth’s book, Our Gang. It is not an angry film with a strident tone. It invents nothing. Probably the most common reaction to the film is to judge Nixon as a buffoon, and yet the film is fair-minded and calm enough that it offers valuable insights into Nixon’s background and development as a politician. Nixon is often unintentionally funny without being placed in a satirical context. So the laughs here are easy game. The real achievement of Millhouse is that it offers a portrait of Nixon that is unflattering yet doesn’t deny him understanding.

And Now For Something Completely Different, based on BBC-TV’s Monty Python’s Flying Circus series, is a mostly successful translation to the screen. The humor may be an acquired taste, but anyone who enjoyed the television series is guaranteed dozens of deep belly laughs at this zany entertainment. ■ 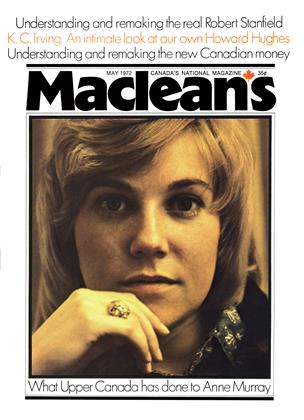