Love is something that other people do. For Will Cole, there’s just - well, take a look.

That’s him over there besotted with booze. A boy in his late thirties. Thinks he’s Gordon Lightfoot after the second drink. Age makes some men wiser. Gives them the strength of contentment. Not Will. The hounds of his private hell are chasing him.

Will’s not a thinking man. He’s a dry throat, an empty stomach. He’s two calloused hands spoiling for a brawl. He’s a sceptre of passion aching for a woman. If it weren’t for thirst, hunger and lust, Will would have no sense of direction.

Everyone says he can’t go on as he does. Staggering into work at the paper mill in Cornerbrook after a night’s carousing with the town whores. Heading straight for the pub again after work, desperate to be happy and forget his dull job.

Things used to go, better for him. When all his friends were young. Times changed, they changed, he didn’t. They settled down and dust settled down on top of them. Will feels more than he can tell. His is the unrelieved despair of the inarticulate.

There was Ruth, the girl he could have married. He botched it. There was his best friend Andrew. He killed him.

An accident. The result of one of Will’s irresponsible pranks.

That’s why Will looks so haunted. Every time he thinks of love he cringes.

The Rowdy man is his story — funny, sad, with a ring of truth.

It’s a fine new Canadian film written by actor Gordon Pinsent and directed by Peter Carter. As Will Cole, Pinsent gives a performance that virtually guarantees him this year’s Canadian Film Award as best actor. The film is not always on Will’s side — that’s one of its strengths. He’s lazy and a bit dumb. There’s no attempt to portray him as Newfoundland’s noble savage or Zorba the Newfie. The supporting cast — Sabina Maydell, Linda Goranson, Frank Converse, Will Geer — is well chosen and the Newfoundland coastal scenery is stunning. The Rowdyman is one of the best Canadian films we’re likely to see this year.

It is never satisfying to see a mostly bad movie for the sake of a few good performances. Mary, Queen Of Scots would be an unmitigated disaster without Vanessa Redgrave and Glenda Jackson. The script by John Hale is not factual, yet not persuasively fictional. Producer Hal Wallis (Becket, Anne Of The Thousand Days) here creates a Royal soap opera that reduces all of its characters to their basest instincts and meanest motives. I heard one woman say while leaving the theatre, “I guess they were all crazy then, too.” The film offers a view of history from the level of a chamber pot.

With Alberta having banned A Clockwork Orange it’s safe to predict that Felix The Cat, an hilarious X-rated animated feature, will never play there. It’s strictly for the unbuttoned provinces of British Columbia, Ontario and Quebec, and even there some of its rude lines and lewd drawings may meet with censorious trimming. Felix The Cat is so funny no one could clock the laughs. As for its alleged offense to morals — who ever heard of anyone being corrupted by a cartoon?

The moment that patrons pay $3.50 to see The Godfather they realize with a pinch that it’s about organized crime. Two days after the film opened in Toronto to record-breaking crowds, Paramount’s New York office upped the admission price by 50 cents from three dollars to $3.50. The Godfather is a special movie but neither its budget (around six million dollars) nor its length (three hours) justifies gouging the public to pay off old debts (in this case Paramount’s $ 17-million disaster, Paint Your Wagon, among other recent flops). Nothing in director Francis Ford Coppola’s past (You’re A Big Boy Now, The Rain People, Finian’s Rainbow) prepares one for the tightly disciplined craftmanship he displays here. The Godfather is the most substantial and satisfying of all the mass entertainment films to come out of Hollywood in recent years. It’s the gangster B-movie distilled to its essence. It will undoubtedly bore some people, however, who will come out complaining that it’s just a spaghetti Eastern.

Gumshoe is a perfect sort of summer film - light as a Panama hat, cool as a frosted daiquiri. It marks the welcome return of Albert Finney. As Eddie Ginley, a failed comic addicted to detective thrillers, who keeps himself buoyant through fantasies and desperate stabs at love, Finney has the field day of a great actor in a breezy role. The supporting cast of Billie Whitelaw, Frank Finlay and Billy Dean are perfect in this likable spoof of Bogart movies. Gumshoe is a minor classic.

Anyone who loves music eventually discovers the historic recordings of Benny Goodman’s 1938 Carnegie Hall jazz concert. There are other inspired moments in pop music ranging from Clyde McCoy’s Sugar Blues to the Rolling Stones’ Honky Tonk Woman; there are more brilliantly conceived compositions in the repertoire of Dave Brubeck and Miles Davis, but the Goodman concert has never been equaled for sheer vitality. Swing was born amid an economic depression and the gathering clouds of war. Yet it is contagiously joyful music. It accomplishes what I consider to be the highest task of any artist: it resourcefully fights despair.

No film exists of Goodman’s famous concert. A pity, because rock music films such as Concert For Bangladesh don’t do nearly a good enough job of uplifting people and making them feel happy. For Bob Dylan fans, the film is a must though his contribution is less than a fifth of the 96-minute running time. Billy Preston’s performance of That’s The Way God Planned It is certainly an arresting bit of frenzy. Ravi Shankar is flawless though better photographed and recorded in Monterey Pop. An ill-advised deluxe version of the film — in 70-mm and six-track stereo — is being shown in the larger Canadian cities, but since the blowup is from 16-mm originals the picture is grainy, fuzzy and washed-out. A 35-mm version available for smaller theatres should look better. There are certain movies — from Rock Around The Clock to Woodstock, Don’t Look Back to Gimme Shelter — that represent whole chapters in the history of rock and roll. Bangladesh adds only a few footnotes. Rock music isn’t dead but one senses its best days of invention are over. Sweet Toronto (with John Lennon), Rainbow Bridge (with the late Jimi Hendrix) and Fillmore will be released here later this summer. They are to be followed by Jesus Christ Superstar, a long-haired conceit with a beat; I’m all in favor of discerning revivals but one should draw the line at Thoroughly Modern Jesus. ■ 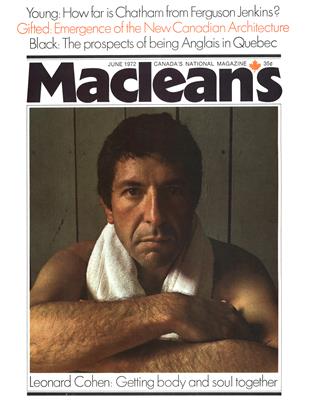