After dark in Berlin, the time is always five minutes to Apocalypse

So the Wall is there, and though Berlin today is more of a paradox than a powerhouse, I still find it the number one metropolis in Germany. Munich may have become the prime magnet, and certainly will be during the forthcoming Olympic Games (August 26 to September 10). Gay and bustling, full of art and culture it’s a big city and easy to like. But to see the big city — Weltstadt — sophisticated, decadent, dignified: the Queen albeit dethroned, you must go to Berlin.

At first impression it’s hard to believe that West Berlin is only half of a city; it feels vast — a glittering, well-planned spacious metropolis, surrounded by abundant lakeland, forests, rivers, beaches and bays. Many of the 2.1 million West Berliners have never set eyes on the Wall behind which the 1,080,000 East Berliners are hived under rather different conditions.

If not economically, at least in urban pleasures West Berlin is self-sufficient. The Kurfürstendamm, its main avenue, 170 feet wide and more than two miles long, is called the largest coffee house in Europe. Here the Berliners like to promenade in front of the opulent store windows and sit for what seem endless hours in the sidewalk cafés, which are glassed in and comfortably heated when the weather turns cold. The star café is Kranzler, though the young mods prefer Zuntz, but all the others have their steady clientele too, and you can see them there digging into creamy cakes, devouring successions of newspapers, flirting with strangers, watching the gleaming Mercedes roll along the wide road and witnessing nightly that overwhelming burst of light that makes West Berlin the most neoned city in Europe.

In 20 theatres, political cabarets, numerous concert halls (not to mention the glorious Opera) and in some 4,500 locals that know no closing hour, the mood is set for merrymaking. As somebody said, “After dark in Berlin, the time is always five minutes to Apocalypse.” A hundred miles deep in Communist territory, not knowing what tomorrow might bring, there is an air of unreality about this sparkling island of pleasure, culture, gaiety and perseverence — a unique experience for the visitor.

Thanks to the “Collected Works of Hitler” — 1.5 billion cubic feet of rubble

— Berlin had to be rebuilt practically from scratch. Neither West nor East followed the original blueprint. West erected a tribute to modern architecture; East largely imported Moscow’s grey power. Not much is left of prewar Berlin

— and that seems to disappoint some visitors who wander around with outdated Baedekers. Personally, I don’t find it hard to accept that Goering’s Air Ministry looks like a desolate warehouse, that no glorious army could now march through the Brandenburg Gate, or that the wide 17 Juni Strasse where the Nazi troops paraded has been usurped by a pride of 3,000 ladies of the night, negotiating with passersby from sleek automobiles.

On the Kurfürstendamm, the stumplike ruin of the Kaiser Wilhelm Memorial Church remains as a grim reminder of the war, though considerably enlivened by long-haired students embracing at its base. The adjoining hexagonal new church is so breathtaking that I searched for a few free minutes every day to slip in and listen to organ music in the blue light, my eyes on the stark modern Christ figure suspended in the air. Fascinating futuristic churches proliferate in Berlin, and so do bizarre abstract sculptures.

Most of the treasures of the many museums survived the war. In the Egyptian Museum stands the 3,000-year-old head of Queen Nefertiti. With its delicate features so intricately made up, it’s even more beguiling than one would expect. There is a choice collection in the Greek Museum, Flemish masters abound in Dahlem’s, and there are other things to see, but the most outstanding museum, I thought, the Pergamon, lies behind the Wall.

You must visit East Berlin; and don’t let anybody tell you that it isn’t worth the bother Nowhere are the two sides of the world so close (just across a downtown street) and nowhere is the difference more conspicuous.

Twenty-eight miles long, the Wall is guarded by 10,000 East German soldiers and several hundred ferocious Alsatian dogs. It’s an eery feeling to cross the “death strip” of barbed wire traps and tank barricades. I took a guided tour this time but you can go on your own, too, presenting your passport at Checkpoint Charley. You must declare all the money you have, you are not allowed to take in Western newspapers, and you must be back in the West by midnight. But you’re free to wander around wherever you wish.

In all fairness, much has happened to East Berlin during the seven years since I was there last. Several modern skyscrapers have appeared and the balconies of prefab apartments do sport a bit of color now. But the general impression is still deep grey — the streetcars, the uniforms, the drab store windows. The broad austere avenues with their colossal buildings lack the vibrant crowds of well-dressed promenaders and the gay bustle of the West’s “decadent” café society. Neon lights are scarce and the few advertising posters seem to concentrate on selling Freedom and Work

The Soviet War Memorial in Pushkin Park, built in the traditional larger-thanlife proletarian style, is very impressive. Anyone who felt the threat of Nazi power can’t fail to be moved by the mass grave of 5,000 of the 20,000 Russian soldiers who lost their lives in the Battle of Berlin.

Monumental is also the word for the unique exhibits of Asia Minor in the Pergamon Museum. You see, for instance, in its original height and color, the processional street leading to Babylon in Nebuchadnezzar's time. Excavated in 1899. here it stands now. blazing blue, complete with enormous gateway, golden dragon and mosaics of sacred animals.

Another tour to the East will show you Potsdam where the treaty was signed in 1945, and Sanssouci, the roccoco castle of Frederick the Great, but I had to skip that one for lack of time and too much to do in West Berlin.

You’ll want to wander around in the Europa Center; it truly reflects the spirit of West Berlin Approached through a tunnel under the Kurfürstendamm, or by crossing three bridges over surrounding streets, it's a marvelously designed conglomeration of boutiques, restaurants. night clubs, theatre, skating rink and thermal baths.

The local people like to shop on Wilmersdorferstras.se which is jampacked with reasonably priced stores, but the really nice ones are on the Kurfürstendamm. Leather, lingerie, ladies’ wear seem mouthwatering. The prices are lower than in Munich. Berlin’s largest department store, the gigantic KaDeWe, is definitely worth a look. The Salon Kling has fashion shows every weekday afternoon.

Afternoon tea dances are popular in Berlin. The best place to go is the Hilton’s lovely Roof Garden. The music ranges from sweet to rock, the clientele from fathers and mothers dancing with their offspring to unattached women of all ages, who inevitably find a succession of dance partners from other tables. Unattached visitors can also find companions in the numerous night spots that feature a telephone on every table. Strangers call up each other, and then meet on the dance floor. Almost everybody speaks some English. The huge Resi dance hall is popular with foreigners but I thought the Rheinische Winzerstuben or the Palais Madame more atmospheric.

Europe’s most wicked city in the Twenties still features a wild and varied nightlife, from the transvestite shows (Chez Nous), to go-go girls frolicking in a pool joined by nude patrons (Eden Playboy), to the Red Rose, where the lovely stripper teases with the inevitable bits of leather and whips. The sensational Cheetah reminds one of a giant atom with its intricate steel columns supporting layers of dance floors. The Riverboat and Big Apple, with whanging bands, attract the young, the Eierschale attracts jazz lovers, Volle Pulle draws the artists, while Quasimodo (which I saw only from the outside) promises “folklore, soul, psychedelic jazz, underground jazz . . . good for quiet talk and contemplation.” There are many others, and it’s customary to visit a number of them in a row. taking perhaps a break in the all-night sauna where the sexes are not segregated.

Music lovers will rejoice at the superb performances of the Berlin Philharmonic presided over by Herbert von Karajan. The new Opera is sheer joy. too. Paneled in light wood, its loges seem to be floating in the air. After the performance go for a bite and a bottle to Hardy an der Oper, a charming Weinstube, full of copper and candles, grandfather clocks and old theatre posters.

Berlin abounds in gourmet restaurants, including the Hotel Berlin where the presidents of West Germany like to dine; the Ambassador, Kempinski, Aben, or the superposh Ritz that serves such things as Siberian bear paw soup and lists many of its choice dishes in their native Arabic, Hebrew, Russian or Japanese languages. But I prefer the less pretentious places with a German rather than an international atmosphere. The Grille is nice or the Altberliner Bier Salon (with a nostalgic old Berlin decor and great breakfast concerts on Sundays) Hardtke has its own butcher shop and serves lusty platefuls of pig trotters, smoked pork, and the gamut of marvelous sausages at very reasonable prices. On the more delicate side, you can get good veal dishes and excellent game almost everywhere.

In leafy Berlin (it has more trees than Paris, three for every one of the 70,000 pet dogs) people love to eat in the outdoor restaurants scattered over the parks and the “countryside,” which lies within a 15minute drive of the Kurfürstendamm and surprises you with the sudden change from skyscrapers to apple orchards, wheat farms, pigs, cattle, and deep forests where you can see deer and wild boar. There are lakes for swimming, sailing or swan-watching, rivers for yachting or taking a sightseeing cruise; there is the odd palace, hunting lodge and little scenic village to visit.

If you drive far enough in any direction you come to the end of the world — the barbed wire, the watchtowers, the guards with guns and binoculars. To some people, this feelingof beingsurrounded is undoubtedly claustrophobic. I treat it somewhat differently. To me West Berlin is an oasis — magical, alluring, seductive — where every acre and every minute are used to the fullest. ■ 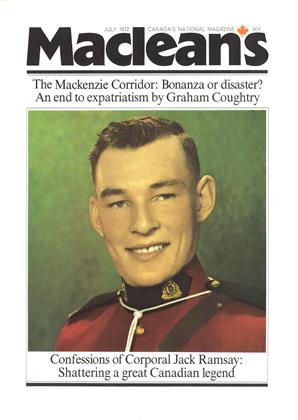