The coming of age of Canadian television could hardly have happened at a more anxious or embarrassing time. The CBC has been damaged by a fivemonth-long technicians’ strike that nobody seemed eager to end; the president has resigned; Patrick Watson is a star in New York; Jalna has failed. John Bassett continues to buy up more TV channels. Small-town stations provide local programming as painfully amateurish as the first day they went on the air. Cable TV is overgrown with a fungus of old Cary Grant and Rock Hudson movies.

I feel affection and admiration for old Mother CBC, warts and all, after 20 years, yet I can’t shake a feeling of worry and concern. Television is in a slump; the public is bored and cynical, in a mood of scrutiny and criticism rather than celebration. There is a sense of failure. It’s easy to point to the triumphs of Canadian television, but listing all the successes only increases the nagging doubt that however good TV has become it could be a whole lot better.

We expected too much. It’s funny to remember the naïve excitement with which we used to gather around the screen, confident that something would happen. It often did. Elvis appeared on the Dorsey show; Kennedy was buried; Lee Oswald was murdered.

But television was supposed to enlighten and inform us, expand our consciousness to the point where old prejudices and blind spots would vanish and we would live together in a global village of total understanding. Remember? Not only do we still have our prejudices intact, but television has possibly increased and exacerbated them. TV is like a computer — you get out what you put in.

The TV set used to occupy the honored position in the corner of everybody’s living room. All chairs were arranged to face it. Now it is usually relegated to the basement or bedroom. It has become a medium for children; television writers and producers admit frankly they aim for an average mental age of 12 or 13.

Television has not, contrary to predictions, replaced books, newspapers, movies or schoolteachers. Its influence has in fact slipped in the past decade. Adults tend to use it as a drug. There is a growing feeling that television is irrelevant.

Nowhere is this disillusionment more obvious than in Canada. The CBC is close to achieving the supreme goal of bureaucracy — efficient management and no programs. The strike which crippled the CBC for five months generated massive public indifference; it appears that if the CBC were to close down tomorrow, nobody would care.

The reason is simple. This spring we were told, for instance, that Casanova would not be shown on the CBC because “Canadians are not ready for it.” That’s a very familiar phrase to an Indian; it is, in fact, the classic expression of discrimination and exploitation. It apparently describes the position of the TV consumer. Apathy is a political act, an expression of anger and contempt by people who are otherwise powerless.

I would like to put forward a modest proposal to help Canadians gain control over their own television network.

Canadianize the CBC. Throw out all the American shows. Let CTV have them. Let’s have 100% Canadian content on the public network. Abolish all the tricks that CBC now uses to get around the Canadian content rules. Make the CBC a truly national network.

The CBC’s Canadian content is now roughly 67%; the government grant is $166 million a year. Another $60 million

would pay for total Canadianization. Sixty million dollars more would get rid of commercials.

It’s a myth that Canadian public broadcasting is too expensive; it’s too cheap. What we can’t afford is chintzy, feeble, low-budget programming. Give the CBC more money. Nationalization would be expensive, but the money is there. The Trudeau government easily wastes enough every year to cover it. I suggest we start by turning the defense budget over to the CBC since the CBC is, in fact, Canada’s only real defense.

Imagine the effect. Pressure of production would force CBC Toronto to decentralize; shows would come pouring out of Vancouver, Winnipeg, Montreal. Hundreds of writers, actors, technicians, musicians would have work.

Too busy to fuss over the shrill cries of old Presbyterians, CBC executives would let all kinds of strange and interesting things onto the air, even, maybe, a

colorful and exuberant show like All About Women. Shows would go live, the way they should be. Offbeat, experimental programs would be used to fill time. The somnolent retired colonels who nest so complacently within the CBC would all explode with outrage; we’d save their salaries.

No longer able to coast on imported American goodies like All In The Family, the CBC would have to invent its own series, pitting Canadian programs against the best the United States has to offer. Canadian shows, which are already as good as or better than most American programs, would be so good that CTV would be forced to start producing Canadian programs to compete.

American imports would wither away. The CBC could then perhaps offer work to some prominent Hollywood entertainers - John Vernon, Donald Sutherland, Joni Mitchell, Donnelly Rhodes, Michael Sarrazin, Neil Young - and sell their programs back to the U.S.

To avoid accusations of chauvinism, the CBC could import programs from other public networks such as the BBC to a maximum of 10% of the program schedule.

TV sets could be taxed, the way they are in Britain, where everyone pays for a license to own a set. This system raises a lot of money, frees the network from dependency on parliament and gives the television consumer an effective means of protest.

You can sell your TV and get a tax refund if you really can’t stand Weekend. Or you can withhold your payment to emphasize your complaint; it’s effective if several thousand people have the same one. Of course, you still have to pay even if you watch only American shows.

Television is really just beginning. The past 20 years have been a kind of apprenticeship; the current disenchantment is a healthy indication that we are starting to understand what television is all about.

People aren’t frightened of TV any more. They are organizing to stop the sale of private stations to conglomerates and to get rid of programs and commercials that are offensive to women and minority groups. Television isn’t magic. It belongs to us, the people who watch it. It is what we make it.

As long as Canadian television remains a branch plant of the United States it will be weak and cringing, because that’s the kind of people it reflects. ■ 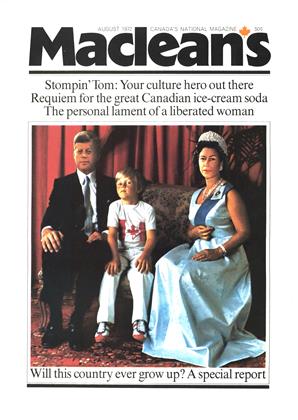