There is something to be said for silence. Except nobody’s listening. We’re all tuned into the radio where Sylvia’s Mother is playing for the fifth time in an hour. We don’t really hear it. The sound is just there, filling up space, plugging the holes in our minds.

Commercial radio is only as good as the music it plays. Last year it was playing the Beatles, seven years ago Dylan,

Commercial radio boomed in the Sixties; it was an event, an experience. The hot-line show, radio’s greatest invention, was created to compete with rock; it salvaged the middle-aged and middle-class audience still loyal to Rosemary Clooney. Stations with hotline shows usually do not play rock.

We tend to forget that most commercial radio stations exist mainly to make money. Success has made them greedy. Rock stations operate according to a rigid formula purchased at great expense from American promoters; they play the Top 40 not because it’s the best music but because they know there are 50,000 kids out there frantically turning the dial trying to find Sylvia’s Mother. The station wants those kids as consumers, not for the music but for the commercials. They want a big audience because numbers sell advertising. They play music that sells. Because the audience for rock is mostly teen-agers, the music is teenybop; because the music is teenybop, nobody else listens.

After a creative explosion, commercial radio is slipping happily back to the homogenized sound of the Fifties. Good rock has become too technically sophisticated for primitive AM radios; radio is drifting back to pop. Burt Bacharach and Fiddler On The Roof. Hot-line shows ride the same hobbyhorses (law and order, abortion, drugs) that were controversial five years ago; the same cranks phone in. Small local issues and trivial consumer complaints are puffed up and beaten to death. The shows are exploited by people who have a message to flog, especially advertisers. “Gee, I’m sorry, we have to break for a commercial,” says the phone jock in the middle of a furious argument. He’s back four minutes later after three singing commercials, the weather, sports briefs and a public service announcement. It’s hard to believe he gives a damn.

Talk radio is at its best on the CBC. Nobody listens to the CBC. Its audience is so small it barely shows up on the ratings chart. In most cities, 10% of the audience is spectacular for a CBC program; in some cities, like Calgary, the audience doesn’t exist at all. CBC radio, which had flowered into a household institution in the Fifties, was destroyed by television. It is trying to recover.

For years CBC producers pretended they didn’t care that they were broadcasting only to each other. It was an inbred old-boy network which liked to refer to itself as the “senior service” and talked pompously about “quality” broadcasting. Quality broadcasting usually meant obscure and pretentious two-hour documentaries written by the producer’s friends. Rock music was considered vulgar; it was ignored. Hot lines were ignored.

Four years ago an attempt was made to revolutionize CBC radio. Music was thrown out of the morning wake-up shows in favor of three hours of straight news and opinion. Information Radio grabbed more than 40% of the Winnipeg audience within a year. The CBC invented the phone-out show; As It Happens (6.30 p.m. to 8 p.m.) links people all over the country on a live telephone broadcast, something commercial radio can’t do. Interviews on CBC radio are, I suspect, better than on any radio station in the world; Peter Gzowski of This Country In The Morning (9.15 a.m. to noon) is much better than Dick Cavett. Talk radio has been transformed; radio lives.

The revolution has recently been suppressed. The network remains committed to the obsolete idea that people still listen to programs, galloping home on Tuesday nights for Jake And The Kid. People don’t. People listen to a sound and on the CBC that sound can be anything from the hog prices at Canadá Packers to an interview with Buckminster Fuller followed by accordion music from Saskatoon. Most newspapers don’t publish radio schedules any more; nobody listens to the CBC because they don’t know what’s on. The audience that Gzowski builds up so brilliantly all morning has disappeared after 30 seconds of the farm broadcast. Once people have turned the dial to another station, it’s extremely hard to get them back. Some CBC programs are very good, a lot terrible, but each is expected to build a new audience every day from scratch. The CBC continues to broadcast as if it were the only radio station in the Canadian wilderness.

The network is trying to get rid of some of its albatrosses (Tuesday Night, Anthology) by shoving them off onto FM. The CRTC shot that down. It also rejected CBC’s plan to popularize the network on the grounds that it would sound too much like private radio. This Country In The Morning and As It Happens, which I gather the CBC means by popular radio, do not even remotely resemble commercial radio. The CRTC seems to assume that “good” radio is unpopular; it wants the CBC to be “good” even if nobody hears it. That kind of snobbery is destructive. Radio was not meant to flog what some bureaucrat thinks is Culture. Good radio is not boring; if CBC shows are dull, they’re bad.

Why not make private radio sound more like the CBC? Commercial radio seems to have a license to be crummy. The ultimate solution — “You can always turn it off” — is inadequate, especially in rural areas where people have only one station to listen to. Why are commercial stations allowed to restrict their broadcasting to music, and to one particular kind of music? In farm communities, the country western music is enough to drive you mad. Why does a city like Winnipeg with six radio stations have none that plays good rock except at midnight? Why do we not have a decent FM station? I have given up trying to find classical music that is not interrupted by chitchat and discussions of the finer points of the flügelhorn. I would like to know why commercial stations are allowed to broadcast direct from used car lots and shopping plazas, telling us all to rush right down here to Dirty Harry’s for a faaaabulous deal. Maybe disc jockeys shouldn’t do commercials at all.

I imagine most of us have a lot of questions and complaints about radio. Nobody ever asks. The radio surveys are careful not to ask “What station are you listening to?” They ask “What station do you have on?” They definitely don’t ask what you think of the programming. Next time, give ’em an earful; this week, try the CBC. ■ 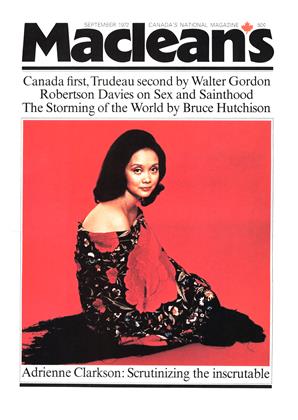