Here’s a guide to the best and worst of the holiday film season when more than 30 new movies will be released throughout Canada.

I am a genius,

I am a genius,

What more could I desire?

I toot upon my little flute And twang upon my lyre.

Portraits of genius range from Sarah Binks (quoted above), a satirical novel about an imaginary nature poet in the Canadian midwest, to Richard Ellman’s James Joyce, one of the finest biographies ever written. Films about genius are usually well-intentioned mistakes. What is there to seel Are the visual aspects of an artist’s life the salient parts? Film director Ken Russell ( Women In Love, The Music Lovers, The Devils) is undaunted by such questions. Armed with one insight, that sex is the great leveler, his waist-high tributes (he’s already done Dante Gabriel Rossetti, Isadora Duncan, D. H. Lawrence, Tchaikovsky and threatens to do Bach) make all artists seem the same. Savage Messiah is about a “brother and sister” relationship between an obscure French sculptor Henri Gaudier (who was killed young in World War I) and a Polish woman Sophie Brzeska in her forties. Suspecting that platonic love is platonic nonsense Russell has his characters scream hysterically at one another for more than two hours, presumably seething with sexual frustration. Doors are slammed, furniture is toppled, capes are swung theatrically over the shoulder; the characters gesture wildly and pronounce clichés about art vs. society and so forth. It’s the sort of grade B melodrama that John Barrymore would have played heavily, hammily and stoned in his twilight years.

August And July: The camera creeps over every pimple and cold sore in this

Canadian documentary-drama about two girls in their late twenties (Alexa De Weil and Sharon Smith, portraying themselves) who share a sexual relationship. Both need Phisohex badly, but acne is the least of their problems. Alexa fantasizes in the film she’s a former mistress of poet Irving Layton; all that crowing imagery about swinging flesh and great balls of fire must have snapped her mind. Pauline Kael once remarked she could never figure out what it is that lesbians do, and this first feature produced and directed by Murray Markowitz does nothing to relieve the mystery. The girls romp through country fields picking wild flowers to flute accompaniment, dance cosily to Carole King’s You’ve Got A Friend and sunbathe in the nude. They spend the rest of their time talking wearily in counter-culture slang: “A man, wow, makes you feel differently than a woman, it’s a whole different trip, you know what I mean, like gasoline in a car, or something.” If the ancient Greeks had discussed the latitudes of love in the same style, Plato’s Symposium would contain such lines as, “Yeah, well, Sappho was a right-on woman once she got her head together.” And that would have finished the Dialogues.

Young Winston: It’s nearly hopeless to successfully direct a $6.5 million film production, but Richard Attenborough {Oh! What A Lovely War!) fights the unwieldiness of the epic form and wins most of the battles. The film deals with comparatively unknown incidents in Winston Churchill’s life: his taciturn childhood, the canings he received in public school, the syphilitic insanity of his father, the development of a strongwilled character in what was originally a frail and lonely child. The story by writer-producer Carl Foreman {The Guns Of Navarone, High Noon) is his finest work, and one of the very few screenplays to derive any benefit from frequent time-shifts and fragmentation. Only occasionally are the ironies created by such juxtapositions heavyhanded. The film’s music, based on Elgar themes, tugs insistently at the emotions like an annoying child at one’s coatsleeves. In the title role, 31-year-old Simon Ward makes as auspicious a debut in his first major performance as Peter O’Toole did in Lawrence Of Arabia,

while Joseph Shaw, Anne Bancroft, John Mills and Jack Hawkins round out the cast. Young Winston will provide some of your finest hours to be had at the movies this year.

Fellini’s Roma: The French Baroque composer Jean-Baptiste Lully, whose brilliantly staged masque Alceste and diverting supper music were favorites at Versailles, wrote bad music only when he tried to be profound or religious. Federico Fellini has a similar problem. A common view of his career is that his early films La Strada, La Dolce Vita and 8V.2 are masterpieces and that Satyricon, The Clowns and Roma are the later, minor works of a burnt-out artist. It isn’t true. It was Fellini’s destiny to be elegant, superficial and splendidly entertaining. Fellini’s Roma (divested of all the gloomy moralizing that marred La Dolce Vita) revisits the same themes 10 years later with graceful insouciance and sunny mockery. There’s no plot. The film ranges from a fashion show in which members of the clergy model the latest ecclesiastical costumes to an interview with novelist Gore Vidal pondering the apocalypse. It’s familiar territory but Fellini isn’t just obsessively recycling old material; on the contrary, he bestows upon it an ultimate state of grace and he has rarely been as witty.

Deliverance: Four American businessmen in their early thirties undertake a canoe trip on the Cahulawassee River in Georgia. One of them is raped and sodomized by demented hillbillies. Another is murdered. The third is crippled in an accident. The fourth stalks one of the hillbillies who escaped from their first grim encounter and kills him using a bow and arrow. The crimes go undetected and the survivors return home to their wives, children and business as usual. The film depicts the Appalachian hillbillies as drooling, toothless, grotesque perverts who assault the fair-

skinned All-American boys (Jon Voight, Burt Reynolds, Ronnie Cox and Ned Beatty). You need only imagine blacks or Indians in the villains’ roles to perceive how profoundly distasteful Deliverance is under its white skin and southern drawl. The film is expected to gross $15 million in North America this year based on early returns in the larger cities. It is Warner Brothers’ official “Christmas release” in Canada. Providing ultraviolence for Kubrick’s droogs is obviously big business.

The Valachi Papers: There are 26 murders, several blood-spewing beatings and a castration scene in this Mafia melodrama directed by Terrence Young (From Russia With Love, Thunderball). Unlike The Godfather the film has neither subtlety nor depth and the acting, with Charles Bronson in the starring role, is earnest but dull. The film has been launched with a massive advertising campaign and is already one of the most popular of the year. With its crude, punky sense of humor and crowd-wowing special effects (people look at the bloody scenes, whistle through their teeth and exclaim Jesus half-shocked, half-pleased), The Valachi Papers is a basely-motivated film. At one point an underworld leader explains that the Cosa Nostra is based on giving people what they want: “drugs, prostitution, slot machines . . .” He might well have added “and films like this one.”

The Emigrants: Together with its sequel The Settlers to be released later in 1973. The Emigrants by Swedish director Jan Troell forms a five-hour epic that may be one of the greatest films we will ever see. Set in the 1850s, Liv Ullman and Max von Sydow star as the impoverished Swedish farmers, Karl and Kristina Oskar, who cross the Atlantic in a verminand disease-ridden ship and start a new life in the American Midwest. The film is so accurately detailed,

beautifully photographed and acted, that it becomes an imperishable memory, a moving testament to the courage and tenacity of the human spirit. There is nothing romantic about The Emigrants’ portrait of pioneer life but its characters have a dignity and resolute purpose that make modern men and women seem prone to complaint. With its reference to honor, selfreliance, integrity; its heroes, great loves and friendships, The Emigrants seems to reproach a lack of human values in modern society. Here is a film to dwell in and be strengthened by.

The Discreet Charm Of The Bourgeoisie:

Filmgoers familiar with Luis Bunuel’s earlier works — The Young And The Damned, Viridiana, The Exterminating Angel, Belle de Jour, Tristona, among others — will need no inducement to see The Discreet Charm Of The Bourgeoisie. A new Bunuel (he’s now 72) is a major event, a joyous experience. A group of friends, all prosperous and respectable people (three of them involved in a flourishing trade in illicit drugs), are preparing to share dinner. The movie proceeds in the form of asides, anecdotes and dreams to tell us about each person — his vanities, anxieties and crimes. The excellent cast includes Fernando Rey, Jean-Pierre Cassel and Delphine Sryig. If you’ve never been a Bunuel film, this is a fine one to start with; Luis Bunuel is one of life’s great originals and he’s in top form here.

The Assassination Of Trotsky: Joseph Losey’s best films.always run counter to fashion. The Servant (1963) was a chilling, prophetic parable (written by Harold Pinter) about a young English aristocrat who became progressively debilitated by drugs and sexual nihilism. Losey expressed his profound pessimism about youth and its new masters

John Hofsess is a film director and critic

years before flower children began going to seed. In The Assassination Of Trotsky (starring Richard Burton and Alain Delon) Losey relates a factual story with far-reaching reverberations. One inevitably recalls the murders of the Kennedys, Martin Luther King and Pierre Laporte in watching Losey’s x-ray picture of Trotsky’s assassin, a hollow malcontent using political pretexts to justify his criminal nature. Assassins kill better men than themselves, Losey suggests, because they can’t tolerate goodness or talent. The Assassination Of Trotsky is a superb film that debunks the romanticism of political violence. Children’s Films: There are two film industries, one primarily for theatrical release, the other for television, and they have become increasingly specialized in their appeal for audiences. With the exception of Snowball Express, a minor entertainment from Walt Disney studios, and a second year revival of Scrooge (the musical version starring Albert Finney) in a few Canadian cities, there are no children’s films to be released this season. Children are no longer considered to be a major market for theatrical films, especially after the disappointing box-office returns of Tales Of Beatrix Potter, Dr. Doolittle, and Chitty-Chitty Bang-Bang. A low-cost way for distributors to find out if a sizable children’s market still exists apart from television would be to revive such neglected classics as The Secret Garden with Margaret O’Brien, a fine version of the famous story by Frances Hodgson Burnett, National Velvet with Elizabeth Taylor (at the age of 12) or others from the Golden Age of children’s movies. Young Winston is suitable for children — it casts a wide net for all ages — but it won’t enchant them or give them much to dream on.

A Handbook Of Canadian Film (Peter

Martin Associates, $2.95) by Eleanor Beatty is an indispensable guide with brief biographies of over 80 Canadian film-makers and a description of film courses and facilities available in every province. Well-researched and accurate. The Cinema Of Stanley Kubrick (Holt, Rinehart and Winston, $9.25) by Norman Kagan is a lucidly written analysis of Kubrick’s fascinating films. It’s likely to be the definitive text on Lolita, Dr. Strangelove, 2001: A Space Odyssey and A Clockwork Orange for years to come. Ingmar Bergman Directs (Harcourt Brace Jovanovich, $11.50) by John Simon contains a rare and informative interview with Bergman and superb essays on Persona, Winter Light, Smiles Of A Summer Night and The Naked Night that are stimulating, intelligent and perceptive. A must for Bergman fans. ■ 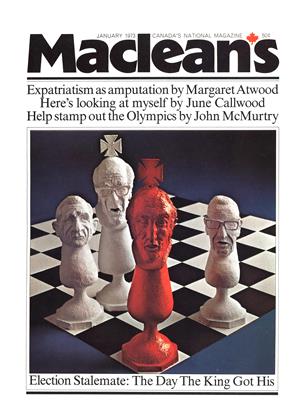