We came back to school all tanned, the girls one summer more beautiful; in the auditorium the principal made a little speech, and we sang the national anthem. Within a week the vacation had dropped away. Once again Mr. Waller, the old wrestler and mathematics teacher, fired deadly chalk at the inattentive; Mrs. Pirie, in her whistling voice, spoke French. The Authentic School Heroes reported for football, while the thin, the fat, the nearsighted and the clumsy traded algebra homework and played chess. Friday afternoons, there was a Pep Dance. We stood in long rows under the jewel-red EXIT sign, boys at the south wall, girls at the north, chaperoned by geography teachers mistrustful in the dark, and watched dramas of incredible social courage and disastrous rejection, smiling with our mouths closed to hide the metal braces. Outside the air was becoming colder. The lucky went steady under the brown trees.

If you were 12, there was a big decision: whether or not to trick or treat on Hallowe’en. Certainly it was childish. Undoubtedly it was embarrassing. But the rewards: apples, brown gummy caramel in orange and black wax wrapping, popcorn (the inconceivable cheapness of the women who released five puffs of popcorn into your shopping bag), toffee, licorice, peppermint, tiny cylinders of Lifesavers to put in your pocket and discover later on a cold February afternoon, broken and furry and indescribably good. My sister, who is seven, is a witch; my mother blackens one tooth, wipes circles under the eyes. Maybe I’ll go along, just to make sure she’s all right.

Peel away the spines and the soft green coating; drill a hole, and run a string through the chestnut. This is an Original Conker, beautiful and lethal, fit for battle against other conkers. Sharp collisions on the lawn. Bob Banting had a conker with 47 kills to its credit one time, a large glossy brown demon, dented but invulnerable. He kept it in a shoe box for a whole year, but the heart had gone out of it during the

layoff, and Don Stauffer’s new conker split it wide open on the first swing. Banting buried the pieces in his mother’s flower bed, but nothing ever came up.

Harris the Drunk has switched from gin-and-tonic to Scotch. Harris switches every May Day and every Labor Day; he points out that these are the two great annual events in his life, except for eggnog at Christmas.

A whistle of winter up your sleeve. Zip in the zip-in linings. Things get cleaned and put away with a handful of mothballs for whatever insanely suicidal moths eat bathing suits in February.

Almost the last of the corn at the roadside stand on Highway 400, north of Toronto. Fat green smug-looking ears, bulging with military yellow rows

underneath; the fall of the cornsilk against your hand. Perfect red round tomatoes in wooden baskets. Eccentric pumpkins. The woman behind the cash register is happy. They go to Florida in November, and stay right through till spring. Squash, with brown sugar and melted butter.

Hey! Everybody’s making money! The new cars are in, the Hooters and the Screamers and the Brand New Destroyers with the Rumble Plates and the Dead Man’s Rocker Reverbs! Big Fall Sale! Back To School! New Winter Wardrobe! Snowmobiles! Clearance! Hey!

Old Man Cassidy was a lawn fanatic; he’d stand underneath his trees and catch the dead leaves as they came down. He’d scrape away at the clusters on the grass, gathering the leaves into a pile, and, just as

he turned away for a basket to put them in, the Evil Neighborhood Kids would sprint across the yard, kick twice through the pile, two long graceful explosive swipes, and off again down the block, to the sound of Old Man Cassidy damning this and damning that and starting again to scrape away at the grass.

Everybody is indoors at night, closer to each other. Affairs begin and end. The men buy ties and get haircuts. The women use a brush of makeup. People no longer put something on: they dress.

One morning early there would actually be frost. The man at the hardware store would smile on his way to work, and bring out the skate sharpener.

Well, says the beautiful lady, autumn lovers are different from summer lovers. They are more polite. They start taking me places in taxis.

Autumn itch, and a friend cracks up: the season is changing, winter is coming, and here he is still in the same old place, same old life. Time to move, to be different, to make a start on the kind of man he thought he was going to be. Change jobs, argue with friends, lose a lady, get drunk and stare down a long tunnel into old age. Move, change; beat the winter. Get to yourself before the snow falls.

The Red Sox are five games out of first place, in the home stretch; the Toronto Argonauts are out of it again; Leo The Leftwinger refuses to sign with the Montreal Canadiens for less than $500,000; the magazine writer plays touch football (down and in, and see if you can get there without falling down this time).

A friend has a baby; we gather in the apartment to salute it. A little girl, eight pounds five ounces, pink against the pink blanket. Mary Fortuna, a fall child, a Libra. A mystic friend tells the mother that fall children are steady and affectionate, but subject to colds.

The days are increasingly short, and the colors of the season begin to darken, become complicated; bright primaries become russet, gold, orange. Painters find the light outside elusive and difficult to capture.

The last swim of the year. The water was already biting; even in late afternoon the skin turned numb in a minute, and we knew that as soon as we came out we would turn instantly into ice and shatter over the beach. So we stayed in till the sun came down, moving slowly in the lake, conscious of feeling from the neck up, and then exploded into towels and clothes and blankets and made fire and waited for the moon, hunter’s moon that drove the birds crazy, hanging like golden mercury over its reflection in the water. We made hamburgers, and kissed once or twice, and drove home very quietly.

My grandmother put things up; a process of stewed fruit and glass Mason jars and wax and sugar and fragrant steam from the kitchen. In the winter preserves would arrive through the mail, with handwritten labels: PEACH PRESERVE, 1955. Cutting through the wax to taste the fall again.

you don’t get those storm windows up today I’m going to hire somebody to come in to do it, I swear I will.

used to be, in innocent times, you could burn all the old leaves in one grand smoky hot conflagration, even the halfrotted wet ones that had lain for weeks at the bottom of the flower bed. On Saturdays half the backyards on the block would be in flame. The city smelled of smoke clear on downtown. The air was grey and dangerous to the eyes. This is no longer permitted in large cities. Instead the leaves decay and blacken inside green plastic bags in the suburbs.

Indian summer, and the hunter’s moon. Things are so ripe they will be bad tomorrow. Eat them now. Enjoy everything while you can. 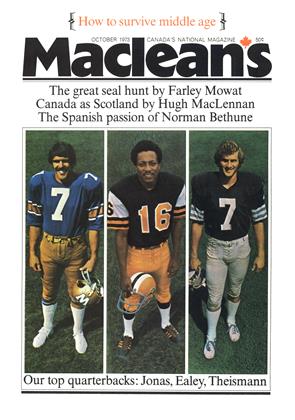