June Callwood’s article on the Royal tour — Liz Windsor Superstar (September) — while unbearably coy in places, was certainly good reading nonetheless. You are to be commended for giving the Royal tour the prominence it merited.

I reject, however, two of the article’s underlying assumptions: that “Liz Windsor” reawakened something that had been forgotten in Canada, and that the final layer of Miss Callwood’s metaphorical egg is impenetrable. Although most Canadians do not feel it necessary to proclaim our allegiances and shout our loyalties from the rooftops on a daily basis, we quietly thank God every day for the stable, democratic parliamentary and social institutions Canada possesses, which are guaranteed by the Crown. Our Queen’s triumphant progress through her Dominion “reawakened” nothing for most of us. How could we ever forget something which, as Senator Forsey puts it, is “flesh of our flesh and bone of our bone”?

The inner shell, hidden from Miss Callwood and to much of the self-appointed “relevant” press, is a clear call and triumphal acquiescence to duty. As our Sovereign sacrifices her privacy and pleasures, so must we learn to give up ourselves to making Canada what she would like it to be.

Watergate reminds Canadians to hold fast to our viable traditions, and remain, in the poet’s words, “a land where kings may be beloved, and monarchy teach republics how they may be free.” Our gracious Queen is the emblem of our citizenship and the torch of our freedom.

Your article Liz Windsor Superstar by June Callwood (September) was a disgrace. Our Queen has not an expressionless face; she has great charm and is a very gracious lady. God save our gracious Queen of Canada and her fine family from the turncoats!

What a contrast between the excellent photographic coverage by John de Visser and the “reporting” of the Royal tour by June Callwood — Liz Windsor Superstar (September)!

Your cover picture must be one of the most beautiful ever taken of Her Majesty. The accompanying photos tell far better than words what a wonderful visit this was. June Callwood should drop her catchy phrases which seem to be her trademark these days. Her cheap and sarcastic reporting belongs in a movie magazine not in Canada’s National Magazine.

June Callwood’s article Liz Windsor Superstar (September) is a truly great documentary account of an important Royal visit. She combines and exhibits every facet of attitude, reaction and implication relating to this event in a succinct, spellbinding manner. Never have I read such a comprehensive report. Thank you, June Callwood.

I am writing to voice my disgust regarding an article in the September issue of your magazine written by June Callwood and entitled Liz Windsor Superstar. I think the title of this article could not have been chosen by anyone with the least bit of good taste, and I would like you to inform June Callwood that Queen Elizabeth

II is always and will always be known as Her Majesty Queen Elizabeth II. She has never aimed at being a super-

star, only at being a queen in the true sense, a queen who loves her subjects and who gives her whole life for the good of her people. A queen who deserves the respect of the people of Canada.

I agree with June Callwood’s Liz Windsor Superstar (September) but only in that it is possible with the best PR people in the world working on her behalf. It seems absolutely naïve for you to suggest that the current Royal tour represents a rebirth of monarchy in Canada. Quite frankly, as a fourth generation Canadian approaching middle age, I am sick of the whole phony deal. I am from “middle Canada” and the only support I can see for the Queen is from weak politicians, the elderly, recent English immigrants and the Brownies.

In the introduction to her Royal tour story — Inside Maclean’s (September) — June Callwood recounts the anecdote of the flag-waving tribute to the Queen by the National Press Corps, when the Québécois reporters to a man chose Union Jacks (“her flag”) rather than the Canadian flag.

Miss Callwood seems to think this showed some kind of “fondness.” What it demonstrated — subtly but effectively — was that for the Quebeckers, the Queen isn’t their queen, and Canada isn’t their country.

Two contributions in the September issue of Maclean’s did not sit well together: Creighton’s superb treatment of a subject of vital national concern — Is Canada more that we can hope for? — done with Creighton’s characteristic urbanity and masterly distinction; and June Callwood’s cynically derisive caricature of the recent Royal visit to Canada — Liz Windsor Superstar — done with incredibly bad taste and the journalist’s flair for the sensational. Any writer, who, even indirectly, wishes to popularize the American brand of republicanism should first learn to speak the truth.

One might have hoped that a historian of Donald Creighton’s stature could have produced a more profound assessment of the Canadian situation — Is Canada more than we can hope for? (September). It is fashionable, of course, to sound the retreat for economic growth and technological expansion. Perhaps this

MOVING? PLEASE NOTIFY US SIX WEEKS IN ADVANCE MR./MRS./MS./MISS NAME (please print) ADDRESS (new if for change of address) APT. CITY ZONE PROVINCE TO SUBSCRIBE TO MACLEAN'S, CHECK BOX (BELOW) AND FILL IN YOUR NAME AND ADDRESS (ABOVE). □ SEND ME ONE YEAR OF MACLEAN'S. In Canada $2.50. Other Countries $4.50. MAIL TO MACLEAN'S, SUBSCRIPTION DEPARTMENT, 481 UNIVERSITY AVENUE, TORONTO, ONT. M5W 1A7

fashion even produces a catharsis of sorts — particularly for Canadians. Things are bad here (at least according to Creighton) but our guilt is nothing compared to that of our nextdoor neighbors. Donald Creighton, surveying his Canadian halo, appears to forget that even the fashionable condemnation of “voracious industrial systems” and “greedy appetites for luxurious living” began south of the border. The spectacle of a Canadian historian, using Canadian resources (paper) to propagate a fashion invented in the U.S. all the while subverting it to the purpose of condemning the citizens of that country, is hardly inspiring.

The great Canoe Lake mystery by Roy MacGregor (September) was the best article on the Tom Thomson story I’ve read over the years because of its high potential of the factual.

It was also unexpectedly timely for Theatre Research Associates which is nearing completion of plans for a Gallery of Missing Persons. TRA established the first studio here for wax figure sculpture. The Tom Thomson case was considered but earlier information was both conflicting and vague. The article settled that.

I just couldn’t resist letting you know how much I enjoyed The great Canoe Lake mystery by Roy MacGregor in the September edition of Maclean’s. The article was a delight to read and the author’s personal involvement made it even more fascinating. Hopefully, I will expect to see more such writing in the future.

Ray Smith’s article, Finding Yourself (September), manages both to enlighten the reader on the problems of adjustment to post-marital bachelorhood — and to perplex him with its curious metaphors drawn from littleknown episodes in world history. So may I please enquire: (1) which Central Asian village could Attila the Hun possibly ■ have passed through in the course of campaigns conducted exclusively in France, Germany and the Balkans, and (2) who were these Chinese that allegedly marched endlessly six abreast over the cliff, and when and where did they do so?

In return for this information, I will offer Ray Smith the suggestion that Chinese food can be deep-fried in a standard electric frypan far more conveniently than in the wok beloved of gastronomical purists, and with equally satisfying results.

Merciful Heavens, Ray Smith — Finding yourself (September). If there’s anything I can’t stand it’s a woman who leaves a man with a dirty apartment. Could you not have whipped that woman into some kind of domestic shape when she lived with you?

But your point is well taken. Housework is numbing. But you seem to be learning quickly. Keep up the good work and someday, someone witty, intelligent, sane, well-read and hopefully attractive will ask for your workroughened hand (and your housemaid’s knees) in marriage. I can’t help but think you’d make that lucky person an excellent wife.

On guard for Lester

When I read the opening paragraph of Heather Robertson’s critique of First Person Singular — The Pearson Saga: remaking Mike (September) — I was so shocked I could scarcely believe my eyes. However, I read bravely on. Eventually I came to these lines “they provide little peepholes into the past . . . [which] . . . most Canadians are too young to remember.”

Heather Robertson’s jaundiced, illtempered review of the CBC series on the Pearson years, First Person Singular — The Pearson Saga: remaking Mike (September) — seems to me to overstep the bounds of good, clean journalistic fun and games. It deliberately distorts the obvious intent of the series, suppresses part of the evidence to support her distortion, and offends against standards of good taste by adopting a belittling tone on a Canadian of national stature who is now in his grave.

References to Pearson’s “bow tie, lisp and aging baby face . . .” as he

played . . parliamentary fool to Diefenbaker’s Lear . . effectively establishes this offensive tone in Robertson’s opening paragraph. More significant is her gratuitous insult to the memory of a deceased statesman in her repeated hints that the TV series was shrewdly planned by Pearson himself as a smart coup to reestablish his political reputation and popularity with Canadians and with posterity. If that were so, he would hardly have omitted the thought-provoking analyses of critical events in his career as diplomat and political party leader for which she faults the entire TV series, conveniently forgetting that, as its title clearly indicates, the producers thought of it as a projection of the engaging, modest, very human Pearson personality, and not at all as the major contribution to history which Robertson argues it ought to have been. Is it not obvious that Pearson himself saw that as a major purpose of his three volumes of autobiography, only one of which has so far appeared?

My argument with John Hofsess’ The emergence of Claude Jutra (August) isn’t really with his evaluation of the film Kamouraska (I have not seen it). I did wonder, though, that nobody at Maclean’s had a thought about letting him get away with the suggestion — no indeed, the affirmation — that Anne Hebert’s stream-of-consciousness technique in her novel Kamouraska is “. . . the most successful use of the style since James Joyce’s Ulysses.” Just like that. Without expansion? Without argument? Without evidence? Without, as far as I can see, any inkling of the kind of literary background required even to submit the opinion? How could you?

Don’t count us all out

Maclean’s is doing a good job in supporting Canadian nationalism. Many of us here applaud your efforts. Americans are not all money-grabbing exploiters. Most of us would prefer a truly independent and stable Canada, based on what Canadians want their country to be. 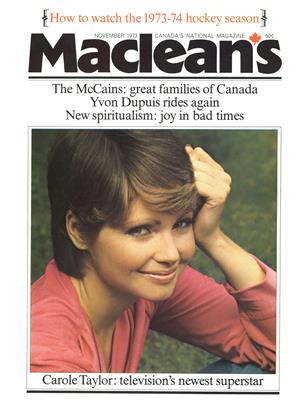