Why is it, I wondered repeatedly during State Of Siege, that no Canadian has ever created a film as powerful and important as this?

State Of Siege is not a costly film though it lacks nothing in appearance. It was shot in Chile, by French director Costa-Gavras (who made the Oscar-winning Z and The Confession) and depicts the kidnapping and killing by revolutionary terrorists (the tupamaros) of Philip Michael Santore (portrayed by Yves Montand, and based closely on the character of American Aid for International Development official Dan A. Mitrione, who was killed in Uruguay in August, 1970). The screenplay — based on actual documents and original research — was coauthored by Costa-Gavras and Franco Solinas, who wrote The Battle Of Algiers. Solinas is a professed and practising Italian Communist; CostaGavras is of no allegiance except that he opposes tyranny in any form, left or right. The film is a rare combination of probing political analysis and intellectual honesty, cast in the form of a dramatic thriller. Here is a film with all the time-bomb ticking suspense of Day Of The Jackal, along with penetrating insights into the present (and probable future) world we uneasily inhabit. It is impossible, I should think, not to be deeply moved

by this film. It is not a piece of leftwing rhetoric masquerading unconvincingly as a movie, as most socalled “political films” are; it has an admirable knowledge of the ethical ambiguities, in ideas and behavior, of those who oppress and those who rebel. The terrorists are not thugs, the man they reluctantly murder is as uncompromisingly principled as they are. State Of Siege is not important simply because its subject is timely. There is a mastery of craftsmanship here, the knack of telling a good story, that make it a model of its type, for while it conveys a fair amount of technical information and raises moral and political questions that are vital (as opposed to the pseudo-issues of A Man For All Seasons) it never forgets its duty as a mass-audience film to hold one’s attention and entertain.

State Of Siege is the best film I’ve seen in years. It enlightens — a feeling you may have forgotten movies could provide. In the absence of any Canadian film of comparable probity dealing with the FLQ crisis in 1970, I recommend State Of Siege as a film that helps one understand political life in Canada better than our own films have been able to do.

Paperback Hero: “That was one helluva movie!” is the response one is supposed to have to this boozin’, cussin’, .swaggerin’, brawlin’, screwin’, story of the Canadian new west, filmed in Delisle, Saskatchewan. It was produced by John F. Bassett (Face-Off ) and James Margellos, and directed by Peter Pearson, who five years ago, at the age of 30, created the award-winning featurette Best Damn Fiddler From Calabogie To Kaladar. Paperback Hero is toughminded and gutsy (for that I respect it) but it is strangely unmoving for a tragedy. Rick “Marshall” Dillon (por-

trayed by Keir Dullea) is an aging, amateur hockey player, who works in Macleod’s general store during the day, in one of those everybody-knowseverybody towns on the Prairies, and spends his nights screeching around in his used Thunderbird convertible like a rambunctious yahoo, drinking himself silly and trying to live up to his own legend as a superficially scandalous bad boy. He is, like a number of clayfooted heroes and heroines of Canadian films, slightly moronic, and when he dreams of success (“Cadillacs, California . . .”) he thinks only of American things. Paperback Hero is a textbook case of all the typical Canadian movie themes: marriage as suffocation; lack of opportunity and choice; ensnare -ment by fate and circumstance; despair relieved only by alcohol.

Elizabeth Ashley as Rick’s motherly girl friend (she’s been waiting for years for him to outgrow his adolescence) goes through the film looking pained and strained. One keeps hoping for more subtle expressions, or a touch of ambiguity. I kept wanting to say, buck up girl, don’t wear your heart on your sleeve. Keir Dullea (an actor I’ve liked on most other occasions) is shrill and brash as the hellraising stud, in a performance that owes more to mugging than acting. Paperback Hero is a portrait of smalltown life drawn by people who are looking down at it; it has certain, truthful observations but it lacks the understanding of, say, The Rowdyman, or the emotional depth of Wedding In White. It’s a film that is afraid to be too sensitive or artistic, and so, like its hero, it comes on too strong, with a resolute lowbrowism and loud voice. The film is about a man who has a machismo problem but the film has one of its own. With such a central blind spot, the film has no insights into Rick Dillon’s life story. Instead of reaching the level of high tragedy of Fat City or This Sporting Life (films which have certainly influenced Paperback Hero) it remains a rather mechanical melodrama, saved only by a lively sense of vulgarity. When Don Shebib makes a film (Goin’ Down The Road, Between Friends) there is no evidence of mercenary calculations, or bows to the box office. His films seem to be honest, made the way they are because that’s the way he truly, deeply feels. And one responds openly to that honesty. Paperback Hero is an over-hearty, rib-nudging, extroverted film; its laments for a soulless hero are spelled out in neon. Perhaps because it is so transparent in all of its tricks one remains unwheedled by it.

American Graffiti: A fine study of growing up absurd in 1962, by director for George Lucas (THX-1138), with a minimum of nostalgia. Slipstream: Those who concentrate on the faults of this feature by David Acomba will be adding up the wrong set of figures. He’s a fresh and valuable addition to Canadian films. 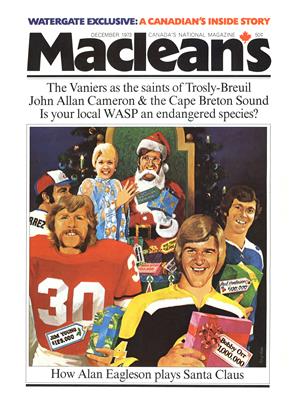