Retirement brings leisure. Of course, after his working life is over a traveler must be careful with his money. At the same time, retirement can bring an extraordinary serenity to traveling, freedom from the expense and bother of pre-booking at popular hotels and luxury resorts. This opens up a whole new world of delights and hospitality.

My wife and I have discovered this by spending two or three months in each of the few years since I gained my freedom mooching about in Britain, Ireland, Europe, Asia and South Africa. We have never sacrificed our comfort for the sake of a few dollars, and only in the occasional old manor house in Ireland and Scotland were we without a private bathroom. This convenience is almost a necessity if one is to avoid stumbling down dark corridors in strange surroundings; but casual travel for the sen-

ior citizen need not be an extravagance.

It took us literally 30 years to make up our minds to explore Wales. We had skirted its borders many times, but always with a feeling that we did not want to spy on the miseries of its people. This reluctance was partly based on literature and moving pictures, which depicted a brave and stoic people surviving misery and misfortune, and partly on magazines and television, which pictured a land pockmarked with slag heaps and slashed with periodic landslides.

Yet we had a secret yearning to know and perhaps understand a proud people whose innate expression of themselves is in beautiful song and compassionate literature. So it was that last April we rented a small car in Bath in the west of England, a city from which it is easy to make the short trip into south Wales.

The wall map in the lobby of our ho-

tel indicated that the most interesting way to approach Wales would be to follow the Severn River on the Gloucester side and then cut westward into the pastoral country at the foothills of the Black Mountains. The desk porter suggested that Gliffaes House at Crickhowell would be pleasant, and he got the proprietor on the telephone. When I asked for a double room with private bath for two nights, I was surprised to hear a very broad English voice reply, “Would you be carrying a rod, sir?”

At first 1 thought that he was trying to imitate an American comedian, but discretion warned me to be cautious. I assured him that I never carried a rod.

“Splendid,” he replied. “We can give you a nice double room with private bath for two nights, but we have no room for any more rods.”

Distances in Wales are relatively short; the whole principality is only 92 miles at its widest part, and 136 miles from north to south. Mileage, however, means nothing when it is only a measure of delight in variety of scenery.

It was barely three o’clock when my wife exclaimed: “Gliffaes House Next Turning Left.” It was hand-painted on a modest wooden slab nailed to a tree. To our confusion, the next turning left was through a high stone arch that opened onto a narrow sandy carriage road winding uphill into a well-trimmed forest. It twisted on for nearly two miles and the carpet of blooming daffodils and the flowering rhododendrons convinced us that we were trespassing, but there was nowhere to turn around. Suddenly a great red brick manor house appeared.

Without any questions, a maid ushered us up a wide heavily carpeted staircase to our room. There was no question of names or registrations; we were guests, not lodgers. It was a large room, larger than our own living room, and furnished in hefty antiques which obviously had served many generations of landed gentry. The French windows opened onto a broad balcony overlooking several acres of formal gardens.

By seven o’clock, the bar lounge was pulsating with conversation. When the guests discovered that we were Canadians, a group gathered to quiz us about Québec Libre, Arctic oil and Trudeau. There was not a Welshman in the house, not even the proprietor, who came from Birmingham.

After a leisurely dinner (table d’hôte) everyone settled in the parlors or in the library for bridge or just conversation. The proprietor and his wife joined us to explain why we could not extend our stay beyond two nights. The fishing weekend was to begin Thursday night and every bed was spoken for, all registered were carrying rods, which was the limit under the manor’s fishing license. That, then, was the reason for the per-

plexing question over the telephone. 1 inquired about some comparable accommodation higher in the mountains where we might be among the native Welsh people. Other guests were called into consultation: everyone had a different idea, except that all ideas were related to fishing. Then the proprietor suggested Dolgellau.

It was only 80 miles to Dolgellau. The market square was surrounded on three sides by formidable stone buildings. On the far side were two almost identical 18th-century stone structures. The one with the cobbled stable yard, wroughtiron gates and polished brass door lamps was the Golden Lion.

The young man at the desk spoke no English, so he called the proprietor. Like all other rooms in the inn ours was warmed by a glowing coal fire and had a surprisingly good bathroom. But night comes abruptly in the mountains and so we quickly went out to orient ourselves.

Every building and every house looked as though it had been built by the same man, at the same time and with the same materials. The interior of the Golden Lion at first looked cold and confined, but by dinnertime the spacious tavern was opened and the people collected. We contented ourselves with a drink and watched the young bloods trying to impress giggling barmaids.

But dinner was quite another thing. A Tudor-style dining room had been added to the rear of the inn. School girls and boys who spoke excellent English served us a splendid dinner with fine French wines.

As we were sipping our drinks and discussing the reticent people surrounding us, a deep-throated bell began to toll insistently in the square. I jumped to my feet, thinking it was a fire alarm, and everyone laughed. Instantly we were one of the crowd, and we learned that Dolgellau is the only town in Wales that still rings the curfew at ten o’clock.

After lunch next day we again pushed up into the mountains, and on to Bettws-y-Coed, 50 miles away. A lefthand turn round a wall of rock led unexpectedly to the main street with a river running gaily down the middle. Our first impression was that of a scene from a Walt Disney movie. Both banks were parks with artistic pedestrian bridges crossing the river at regular intervals. There could be no doubt here was a town of wealth, leisure and absentee ownership. But it was not for us. Every one of the many fine hotels we examined was closed.

In desperation, I went to the post office, but the postmistress spoke no English. A gentleman intervened and between the three of us we arranged a telephone call to a hotel nine miles away at Beddgelert. We set off into the mountains to the southwest. At the very top

we came upon a modern structure with expansive picture windows overlooking the forest below. The hotel was much more inviting than its name, the Royal Goat. It was spacious and starkly new even to the point of renouncing its environment From floor-to-ceiling windoVs one looked down into a deep gorge with two cascading waterfalls.

Coming down from Beddgelert the following morning we drove through a narrow pass, and stretched out far below us was Cardigan Bay, with its wide sweep of yellow sand and rolling dunes. On the horizon was a rocky cliff pointing out to sea, with the austere ramparts of Harlech Castle silhouetted against the sky. As we came closer, St. David’s Hotel seemed to nestle beneath the 200foot-high walls of the fortress. One actually drives down into the hotel from the road leading to the castle.

We were in the lounge looking down the twelfth fairway of the championship golf course when a great congregation of chattering people invaded the rather dignified reception rooms. A maid informed us that lunch would be served in the coffee room since the main dining room had been taken over by a wedding breakfast for 270 guests. This we had to see despite the lunch. As the young bride entered all the guests stood up and, led by a strong baritone voice, sang a toast in Welsh. After the first verse the voices were warmed up and delicate harmonies emerged from the melody.

After 10 days of meandering through those mountains, it was amazing how quickly we were down onto the plains and headed for Shrewsbury and the trunk road to London. Shortly after noon the car was delivered to the agents after 525 miles of carefree driving. We had seen only a small part of rural Wales but that part was quite enough to completely contradict our earlier unfortunate impressions. Ten days had been well invested in happy memories of a self-effacing people who live contentedly with their traditions and ask only that their ancient culture and their identity be preserved. ■ 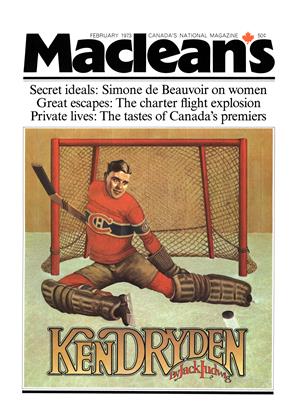