According to Professor J. Tuzo Wilson, whose thoughtful article begins on page 24, the gravest crisis confronting Canada at the moment has nothing to do with social unrest, French-English relations, foreign ownership, pollution or poverty.

“It is that our demands for energy have been doubling every 10 years, that most energy is made from petroleum and that the United States has used up half of all its crude oil and much of its natural gas.” From these fairly mundane facts, Prof. Wilson draws some startling conclusions. The Canadian north is not a rich storehouse of untapped energy resources, although many of us persist in believing it is. Instead, the moderate size of the oiland gasbearing basin in the Arctic indicates that future finds can at best only double existing Canadian reserves. In other words, all of the oil and gas we can ever hope to find either in Alberta or the North, would add up to less than 2% of the world’s total reserves. “That,” according to Prof. Wilson, “would only meet U.S. demands for a few years at best, but Canada needs this energy for her own survival and these resources should be husbanded carefully.”

The value of the Wilson analysis is that he writes not as a politician with any special point of view to push, not as an economist with a theory to prove, and not even particularly as a Canadian, trying to sound alarm bells. He writes simply as a scientist, coolly reporting on the future of a subcontinent where he happens to live.

Paradoxically, the one government that clearly has endorsed the Wilson assessment is the Washington administration of President Richard Nixon, whose own director of emergency planning, G. A. Lincoln, recently rated the energy crises ahead of the cold war and Vietnam in the priority of U.S. concerns. Secretary of the Interior Rogers Morton told a Senate committee recently that the U.S. “must pursue” a continental energy policy with Canada, and that, in fact, talks on

continental energy planning had already been going on for some time with Canadian politicians and civil servants. The details of such a policy remain secret, but its outlines seem obvious. When Secretary Morton talks about the need to share the oil, gas and other energy supplies in North America, what he really means is that the Americans would acquire our resources.

Because it would provide the main physical link in any expanded movement of energy resources from Canada to the U.S., much of that debate will centre on the Mackenzie Valley pipeline, the five to six-billion-dollar project being mapped out by a consortium of large oil and gas companies. The pipeline, which would be the most expensive and most complex construction project in Canadian history, will be the subject of hearings before the National Energy Board. The issue is too complex for detailed analysis here and it is too early to make a final judgment for or against the pipeline. But the Canadian government should insist that the energy negotiations be resolved quite apart from the many trade problems between the two countries. If trade and energy are not kept separate, we might exchange some short-term export benefits for the kind of long-term energy sales that would cripple future Canadian development.

In reaching its decision on both the Mackenzie pipeline application and this country’s long-term energy policies, the National Energy Board should not be diverted by narrowminded critics on either side of the issue. There’s nothing immoral about exporting energy resources, provided they’re surplus to our requirements. Neither is it anti-American to act in our own long-term national interest by opposing gas and oil sales. As Prof. Wilson points out: “In many parts of the world including much of the southern United States, people will be uncomfortable if heating fuel is cut off. But in Canada, many people would die.” ■ 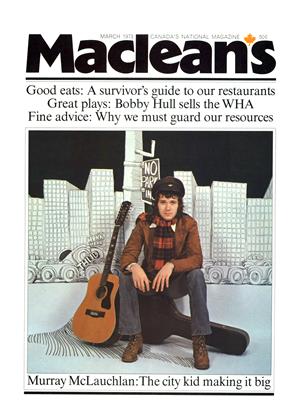