Gerry Patterson thinks square. That is one of the secrets of his success, and Gerry Patterson, at 39, is a very successful man. He is enthusiastic and loud and tells a lot of jokes, and every day at noon he shuts the door of his Place Ville Marie office in downtown Montreal and lies down on the plush red carpet for a half hour catnap. Then he gets up and writes down his thoughts in a diary, illustrating them with diagrams on a blackboard he had installed for the purpose.

“Plan your psychic destiny,” he scribbled one day. And there were already words like “hypothalamus” and “galaxy” and “cosmic mind” and nine concentric circles and another diagram which he calls a four dimensional continuum, all symbols of his theory of the universe.

Gerry Patterson is middle Canada and his thinking reflects this. Work hard, do things well, be honorable, don’t be moneygrubbing, and everything will turn out for the best. And sometimes he comes up with homilies of his own creation. “Income taxes are there to protect us,” he told me one day. He speed-reads four books a week and he underlines madly, having his secretary type up relevant passages for further study. If you light a cigarette on an airplane he is traveling on he will likely hand you a folded business card. On the outside is printed: “STOP. You may be killing the both of us.” And inside is a list of the perils of smoking according to the U.S. Surgeon General, including loss of hair. “Why shouldn’t I do it?” says the baldheaded Patterson. “I believe in it, I should market it.”

It figures, because marketing is Patterson’s life: he sells athletes — hockey players, baseball players, skiers and golfers — to banks and chocolate bar manufacturers and packaged milk and soft drink distributors and he keeps 10% of whatever he can get, but 90% goes to the athlete and often it’s 90% of money the athlete never dreamed of earning.

Patterson admires his clients and he respects them, so he makes sure they don’t get involved in anything that doesn’t fit with the image. “The one judgment I make, on anybody I represent — it sounds too goody-goody but it’s the truth — is whether the actions are in the best interests of the client,” he told me one day.

The marriage of Rusty Staub, known to baseball fans as Le Grand Orange because of his flaming red hair, with Orange Crush met Patterson’s standards. But the Nancy Greene plugs for Mars

Bars didn’t. “To have Nancy stand on a ski hill saying she enjoys Mars Bars just isn’t credible,” he said. He argued with her after she became a client, and she told him: “Listen, I love them,” and finally they compromised. The commercials were toned down. They just promote a contest now, with a trip to Europe as prize.

One client Patterson won’t let near a Mars Bar commercial is Ken Dryden. “With Ken you concentrate on the fact that he’s involved with ecology, that he’s a highly educated and highly responsible young man and that he’s also the number one goaltender in the NHL. You’re very conscious of which programs you get involved in. It would be difficult to have him involved with General Motors because he’s worked with Ralph Nader. So we would have him involved with perhaps a paper company that’s interested in ecology and waste, or an oil company that’s concerned about the atmosphere. I find it very difficult to see a serious young man like Ken Dryden endorsing a chocolate bar.”

Which is ironic, because Ken Dryden also likes Mars Bars. But Patterson says that “sometimes if the truth sounds like a lie, you shouldn’t tell it.”

Patterson’s clients include Gordie Howe, Jocelyn Bourassa, Guy Lafleur, Richard Martin, Ferguson Jenkins and Jean Râtelle, but it all began with Jean Béliveau. Once, you see, Patterson wanted to be a professional athlete, but he wasn’t any good. “I was third string quarterback,” he says. “They used me in downfield tackling practice . . . eventually I became cheerleader. I told the

Harvey Schächter is a Montreal writer

coach I could do more for the team there and he agreed with me.”

He went to work, marketing, but he stayed interested in sports and in 1968, when he was developing an advertising campaign for milk cartons, he approached his idol, Jean Béliveau, for an endorsement. He was astonished to learn that Béliveau didn’t have a business managet.

“It bothered me,” he says, “that Canada’s number one statesman in hockey had no one planning and pursuing his business interests so I developed an overall five-year plan for Jean and we discussed it. He didn’t think it could be done so he said no, but two weeks later he changed his mind. He figured if I was confident enough to give up a steady job to work with him there must be something in it.”

Patterson helped with contract negotiations. He organized endorsements, looked after Béliveau’s insurance, estate and tax planning and he began doing something about the 18,000 fan letters his client was getting in a year, and for all of this Patterson became vice-president and 10% shareholder in lean Béliveau Inc.

Then came the commercials: Ex-CellO Corporation. American Motors. Sun Life. Ovaltine. And endorsements: a toy hockey game. A restaurant franchise. And when Béliveau retired from hockey Patterson got him and Gordie Howe on Hockey Night In Canada as game analysts.

Then there was the Bank of Nova Scotia and the “Mister Béliveau-Mister Howe” routine for which the two men ground out 37 television commercials in just 10 days. They serve the BNS in a variety of ways — more than 55,000 youngsters have enrolled in the bank’s hockey college scheme, for example — and, one way and another, they will pocket a total of $100,000 in retainers for doing such work in a two-year period. But Béliveau is phasing out the commercials now. He wants to operate at the boardroom level

— directorships — and that’s fine with Patterson.

“I think Jean has the opportunity and ability to become a true corporate statesman,” he says. There’s that word again

— statesman — and who’s going to laugh? Patterson means it.

What next? Well, what Patterson really wants to do is form a Canadian conglomerate in the leisure industry. “There’s unlimited potential in this area,” he says with bubbling enthusiasm. “And if it’s -unlimited why isn’t some Canadian company harnessing the potential?” And the mind flicks back to the Place Ville Marie office, and the words scrawled in the diary: “What you conceive and believe, you achieve.” 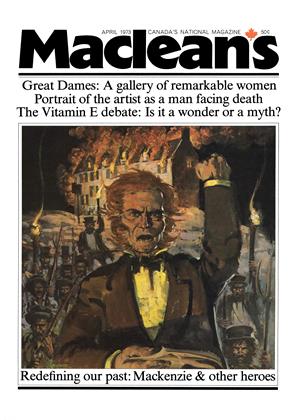