— Hélène Baillargeon Hélène is an unlikely martyr. A daily 15minute bilingual show for preschoolers, Chez Hélène (CBC — weekdays, 10.45 a.m.) is stilted and old-fashioned and certainly not hip like Sesame Street, yet its cancellation brought a surprising public outcry, a tiny indication of growing public anger over CBC programming policies which flout the wishes of the audience and possibly break the law.

Chez Hélène, a 14-year-old show from Montreal with a daily audience of almost half a million, was scrapped because it had been on too long. On these grounds the CBC is compelled to get rid of Front Page Challenge, Hockey Night In Canada and the national news. But all these shows come from Toronto. Toronto shows are seldom cancelled, they just get renamed. The CBC has only 10 regular network shows produced outside of Toronto, and some provinces produce no national programs at all. The cancellation of Chez Hélène reflects a serious prejudice against regional productions which is not only stupid but also raises the crucial issue of separatism.

“Western Canadians have adopted the CBC as one of many symbols of the failure of Canada to succeed as a nation,” states a telegram sent to CBC president Laurent Picard by CBC Winnipeg television producers. “It has been evident for many years that western Canadians feel little or no relationship to the CBC English TV network. To them it is an ‘eastern thing,’ a Toronto parochial organization pretending to be able to interpret Canada to Canadians. We are simply not presenting the views of western Canadians, except as occasionally interpreted by Toronto producers.” The Winnipeg producers are in revolt. Backed by L’Association des Réalisateurs, the organization representing all CBC TV producers outside of Toronto, they are demanding a drastic increase in regional network programs and the dismemberment of The Kremlin, CBC’s head office in Toronto.

The situation in Winnipeg is typical and desperate. In the past three years Winnipeg’s contributions to network programming have diminished almost to zero. Winnipeg has one network series — Hymn Sing (CBC — Sunday, 5 p.m.) — and a weekly half-hour segment on the teenybopper Drop-In. Winnipeg hasn’t produced a Tuesday Night documentary in two years (the last one was never shown), variety and children’s programs have disappeared and the electronic highway to Weekend has collapsed. Even agricultural broadcasts originate in Toronto. The atrophy is intentional. A recent memo from CBC’s vice-president and general manager of English services Eugene Hallman describes Winnipeg’s role as a TV production centre in six sentences: aside from contributions to Toronto shows, Winnipeg is to produce “half-hour programs in light music, light entertainment and in the field of quiz or game shows.”

Toronto’s excuse is that people in the boondocks are too dumb to produce anything good enough to be seen on the network. The CBC brass goes to some pains to preserve this illusion; a recent CBC press release praising the Sesame Street inserts forgot to mention that they were produced in Winnipeg and omitted the names of the producer and the technical crew. The producer, Don Williams, filed a grievance against Knowlton Nash, the CBC’s director of information programs under whose name the press release was issued. Williams is the only CBC producer to have twice won the CBC’s Wilderness Award for the best Canadian film shown on the network; he has subsequently been virtually frozen out of CBC film drama production. Success depends on a producer’s ability to sell a show in Toronto; shows are accepted on the basis of Toronto biases and tastes or out of a personal liking for the producer. This cattle market leads to wide disparities; as well as The Beachcombers and The Irish Rovers, Vancouver has produced several Tuesday Nights. Halifax, however, is grateful that it has two network musicals — Country Time and Singalong Jubilee.

The problem is power. “As long as those guys in Toronto are drinking each other’s bath water, no way are things going to be different,” says Williams, quoting Senator John Nichol. Regional producers submit thousands of program proposals to headquarters in Toronto; the ideas are either rejected or ignored. “The producer of Telescope promised he’d call Monday,” says Williams. “That was two years ago, I’m still waiting.” To calm insurrections CBC executives periodically tour the regions on what local producers mockingly call Royal Visits. Summoned to the boardroom, the producers tug their forelocks as a pooh-bah from Toronto spouts platitudes and scatters crumbs of programs at their feet. “It’s like the annual visit of the president of the IODE,” says one producer. The Winnipeg producers are willing to admit not all their shows are winners. “But when somebody from the regions has a bad show, he’s wiped out,” says Williams. “He never gets another chance.”

The confrontation within the CBC has profound political implications. By failing to provide programming which adequately reflects the views of all areas of Canada, the CBC is defying the Broadcasting Act. The network’s program obligations are clearly stated:

“The national broadcasting service should be in English and French serving the special needs of geographic regions and actively contributing to the flow and exchange of cultural and regional information and entertainment and contribute to the development of national unity and provide for a continuing expression of Canadian identity.”

Under the Act, the CBC is required to carry out all these obligations. It could be sued for failing to do so and a court order could be requested forcing the CBC to abide by the law or face contempt and jail terms for its principal executives. The case shouldn’t be hard to prove. Where is the culture of the hinterland, the flow and exchange of regional ballets, symphonies, artists and musicians, the Canadian plays and films, the language and ideas of Newfoundland, the opinions of Saskatchewan and PEI, the politics of the Arctic, the expression of New Brunswick and Thunder Bay? Is the identity of Winnipeg a new version of Beat The Clock? We’re fed up with Toronto programs posing as national programs. We’re fed up with being treated like hicks and bumpkins. There are 20 million witnesses out here. Our rage and our alienation should not be underestimated. ■ 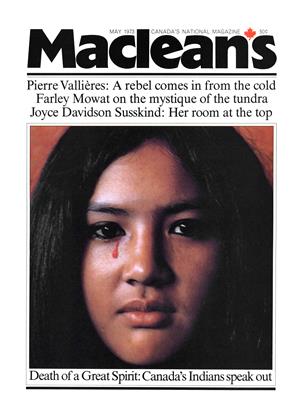