Click to View Article Pages
THE VIEW FROM BC

As you drive along the Kootenay lakeshore in northern British Columbia, you see summer cottages nestling into a sandy bay, small boats trolling for Kokanee salmon, postcard farms tilted toward the water. As the road climbs there are breathtaking vistas of the lake far below. When you reach the northern tip of Kootenay Lake, you take a short, surgically clean road up to the tidy grass slopes at the Duncan Dam. From the viewing platform, you can see precisely trimmed forest edges for that short distance before Duncan Lake takes a westerly bend behind the mountains.

But if you stop to question any of the local residents about Duncan Lake, they’ll probably suggest you drive up the old highway. Its use is discouraged now, and it’s difficult to find. An unmarked road leads across a wooden bridge below the dam. You take this and bear left, winding your way up a rocky track along the far side of the lake and pause at a promontoryjust as you reach the bend.

There, as far as you can see, is ugliness. Ghostly skeletons of trees pierce the stagnant water. A half-drowned orchard slips below the murky bank. A floating island of marsh supports a single dead tree and a rotting cabin; a bay, choked with tangled debris, is walled off by a log boom.

The contrast, which hits you like a hammer, symbolizes the whole of the Columbia River development which created it: the glossy, superficial dressing; the ugly realities hidden just out of sight, and the efforts to conceal the mess from the Canadian people. The Columbia River Treaty is a bone in the throats of many politicians, some of whom were opposed to it from the beginning.

A symbolic, rain-dampened ceremony was held at the Peace Arch near Blaine, Washington, in September of 1964, to mark the ratification of the Treaty. President Lyndon Johnson was there and Prime Minister Lester Pearson, and last but not least, Premier W. A. C. Bennett. A symbolic cheque for $273,291,661.24 was presented to Canada. The actual transfer of money was arranged in New York, but a story was leaked locally that the cheque was being rushed to the bank for deposit before closing time, thus gaining an extra day’s interest of $30,000. It was symptomatic of the money-grubbing, get-rich-quick attitude of the Canadian negotiators.

In addition to the initial $254 million downpayment, the Americans paid a further $75 million in flood control and other benefits to complete their part of the bargain (and it was, to them, a bargain). We have a commitment to build three dams in British Columbia —Duncan, High Arrow and Mica — and we have an agreement permitting the U.S. to build another dam at Libby, Mon-

tana, which will flood more Canadian territory. We have a covenant to regulate the Columbia and Kootenay River flow for flood protection forever.

These enormous concessions were agreed to for a short-term gain and to get cheaper hydroelectric power in the future. But as it has turned out, there won’t even be a short-term gain. Instead there will be an enormous loss, for the Canadian negotiators not only gave the Columbia away they subsidized the Americans in the process.

Bennett promised the people of British Columbia, during the critical 1963 election, that the sale of downstream benefits would pay for the three treaty dams with $53 million left over to pay for half the cost of installing generators at the Mica Dam.

Since two of the three treaty dams — Duncan and High Arrow — provide only minimal benefit to Canada, the only conceivable excuse for the agreement was the promised profit on Mica. Now, the awful truth is beginning to emerge. The people of British Columbia will wind up contributing more than $300 million to reach what was to have been the whole thrust of the Bennett promise. And the Americans will wind up paying for half the public works that were implied in the agreement.

Mica Dam is the only project Canada really wanted. It will cost approximately $950 million. Of this, not more than $200 million will have come from the Columbia River Treaty monies, meaning that Columbia River power from Mica will be only slightly cheaper as a

Dr. Patrick McGeer, MLA, is former leader of the BC Liberal Party

result of the treaty. That may be the only benefit Canada will have to offset all that has been given up.

While proof of Canada’s blundering on the Columbia River was slow in coming, the acceptance of environmental destruction was obvious from the start. Incidents underlining this dismal aspect of the whole development have marred attempts at showpiece openings of completed dams. One, at Duncan in 1967, occurred after planeloads of influential Social Credit friends were flown in for the occasion. Before their arrival the area surrounding the dam was gone over with hand rakes. Premier Bennett told the crowd that “in Duncan Lake there has been created a haven for pleasure boats, beaches for swimming, a place where forever we will find physical and mental benefits.” It was Bennett’s custom never to invite opposition members to ceremonial openings, but Randolph Harding, NDP member representing the dam constituency, came anyway, mixing with the crowd and steering members of the press up the small dirt road on the far side of the dam so they could see for themselves the devastation.

Although Premier David Barrett has consistently played down points of conflict between Ottawa and Victoria, it could be that the controversy over the Columbia River Treaty will start the old wars raging anew. In his first meeting with Prime Minister Trudeau, Barrett asked informally to have the treaty reopened with the U.S. The Prime Minister dismissed the request, saying, in effect, it was tough luck for the province. The financial terms were set by the old Bennett government, and Ottawa wasn’t going to go running to Washington now.

But Barrett has a strong political case and the matter will not likely be dropped. Despite terms of the agreement between Ottawa and Victoria, the Columbia River Treaty was never ratified by the BC legislature. Finally, the agreement specifies that the federal government shall, at the request of the province, present to Washington any claim deemed reasonable by Canada arising from any article in the treaty.

The Columbia River Treaty represents too much of what has been wrong with Canada for it to be dismissed today with a federal shrug. It was one of Canada’s greatest negotiating disasters and represents what a continental energy policy should not be. That is a policy where Canada provides the resource, commits the land, suffers the ecological damage, and in the end finds that politicians have allowed it to be sold for a fraction of its true value. The real test of new political values is the determination to seek renegotiation of one-sided arrangements of which the Columbia River Treaty is a prime example. ■ 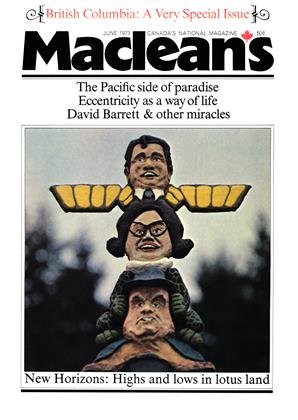