You’ve probably heard that the IMAX film process used at Cinesphere in Ontario Place, located on the Toronto lakeshore, features a screen six stories high and 80 feet wide, with a sound system employing 88 speakers. IMAX is, at present, the practical limit of film technology. Its six track stereo system permits a film maker to precisely posit a sound anywhere in the theatre. Since the visual image is considerably larger than the frame of human vision it creates a giddy (sometimes even panic-stricken) sensation in the viewer of falling into the picture. No other kind of “movie thrill” comes close to it.

So far only two films have been shown in IMAX: Graeme Ferguson’s pacesetting North Of Superior, which since its debut two years ago has been seen by more than two million people, making it unquestionably the most popular Canadian film yet produced, and David Mackay’s Catch The Sun, this year’s new addition. Mackay produced one of the few Canadian films ever to win an Oscar — Chris Chapman’s A Place To Stand. With attendance at Ontario Place expected to reach a record three million this year (in addition to new films, there will be five jazz concerts, nine rock shows, 15 ballet performances and 18 Toronto Symphony concerts) a great many people will be standing in line on the ramps outside Cinesphere, throughout the summer, waiting on an average half an hour to see a 20-minute film. Is it worth the trouble?

IMAX films deal with sensations rather than ideas. There are at least two sequences in Catch The Sun — a roller coaster ride and a dangling aerial shot from above the Toronto-Dominion Centre — that will give it the reputation of being almost biliously exciting. (Parents with children filled with midway hotdogs and coke may find IMAX a regrettable experience, especially on a hot day when the press of people makes Cinesphere smell like a locker room.) And yet as shot follows shot (the film is a curious mixture of everything from iceboat racing to church choirs, views of Niagara Falls and Stompin’ Tom Connors, Mosport racing and hoot owls, with no discernible theme or aesthetic logic) it seems to me to be corrupt in some way, void in the centre, as if it suffered from lack of inspiration or enthusiasm on the film maker’s part. Apart from its technical proficiency (and one should never underestimate the diligent work involved in mastering the complexities of IMAX sights and sounds) Catch The Sun looks like an aimless home movie, a non-film which coasts along on the gimmick of IMAX.

“We only had one restriction placed on us,” David Mackay told me, referring to the IMAX film’s producer, the gov-

emment of Ontario. “We were told not to make it too exciting.”

“Well, nobody knows the capacities of people to watch IMAX,” he countered defensively, “We don’t want to scare people too much. Personally if I were investing in a film I wouldn’t make an IMAX film.”

I couldn’t help recalling talking to Graeme Ferguson two years ago, on the same spot, and remembering how excited he was about the prospects offered by IMAX, of making feature films and building a chain of theatres similar to Cinesphere in major American and European cities.

I am sure that what makes North Of Superior a better film, a film with a theme, organic unity and style, a rousing folk song sound track, and — at least — a tasteful and disciplined use of the giantism of IMAX, is that Ferguson is in-

spired by the process, whereas Mackay seems overwhelmed by it.

“We only had eight months in which to complete the film,” Mackay added, “whereas Ferguson and his team took a year and a half to make North Of Superior. I don’t think Catch The Sun can be reviewed. It’s a test film, a collection of scenes. It doesn’t even matter that it’s called Catch The Sun. We’ve had numerous titles for it.”

“All of them meaningless?” I asked.

“You could say that,” he replied'. “The Ontario Place people wanted something a bit catchy, you know, but Catch The Sun isn’t really a film.”

What is it then? Catch The Sun is a rush job, produced by a government bureaucracy as a tourist attraction and made by a man who is indifferent to the potentials of the expanded medium.

Hitler: The Last 10 Days: The deep fascination with Adolf Hitler which has sustained many best-selling books in recent years may not hold or carry over for this movie. For one thing, everyone knows that the last 10 days were a bummer, and it isn’t Hitler’s failure that holds public attention several decades after the Third Reich crumbled, but the extraordinary animal vitality of the German people, and the madness that was let loose by a leader who ruled with the wisdom of instinct. Alec Guinness portrays Hitler with uncanny exactitude (though attempting no approximation of Hitler’s voice and accent) and dominates every scene in the claustrophobic bunker, while Berlin falls apart around him. It is not the sort of film that offers insights into Hitler or gives one the elevated view of history. It is well made and well acted, but at heart it is a pedestrian drama.

Last Tango In Paris Postscript: Geneviève Bujold told me she’s never seen a more powerful film. Pierre Berton told me he found it so boring he fell asleep in the middle. Pauline Kael says it’s the greatest work of art since Stravinsky’s Le Sacre du Printemps had its premiere in Paris in 1913 — a sentence that begs for parody and will surely get it. I consider the film tripe with a lot of hype, overrated and overpriced: this year’s mindless movie-trend for lemmings. What deserves mention however is that four provinces (Quebec, Alberta, British Columbia and now Ontario, which from a film distribution viewpoint are the four that matter) have passed the film without cuts. Last Tango may be a new wrinkle in films — call it women’s porno, a replacement for the melodramatic sudsers called women’s pictures in former days, since, so far, it is mainly women who like it. It deserves a small footnote in Canadian cinema since it helped broaden this country’s censorship laws. All to the good. ■

RECOMMENDED THIS MONTH KAMOURASKA Claude Jutra’s triumphant new film starring Geneviève Bujold; DEATH OF A LUMBERJACK: Gilles Carle’s latest and most commercial film; CRIES AND WHISPERS: Ingmar Bergman’s long-running success is one of the finest films in recent years; LOVE AND PAIN AND THE WHOLE DAMN THING: Until such time as Maggie Smith contracts Love Story disease, she and costar Timothy Bottoms make this offbeat comedy well worth seeing; MARY POPPINS: A Revival for Children. STATE OF SIEGE Costa-Gravas, briskly edited drama about kidnapping and assassination in South America. 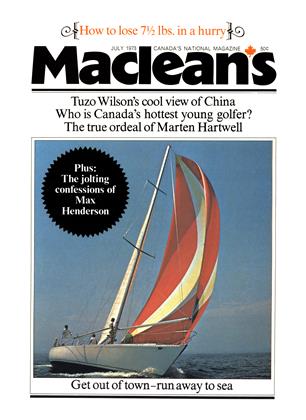