Baseball was never intended for grown-ups. That, presumably, is why the Americans are so fond of it. It may also be why Canadians take a more detached view: they realize

baseball is a game to be played, not studied.

That’s not to say Canadians don’t like it. As long as that touch of burlesque can be found, baseball is a fine pastime. Just rid us, please, of that computerized worship that depicts the true-blue American ball jock; we, fortunately, have never got into that obsession for statistics on RBIs, ERAs, saves, outs, at-bats, walks, triple plays and errors. Good fun, yes, but spare us the numbers.

Former New York Yankee pitcher Jim Bouton, after he’d been kicked around in the minor leagues (all the way down to Vancouver at one time), recognized the problem in his controversial book, Ball Four. “The sad truth about baseball,” Bouton

wrote, “ is that there’s not

enough in it to occupy a man’s mind. In desperation they turn to insignificant things and blow them up.”

Big league ball came to Montreal in 1969. the year the Expos joined the National League. They were instant also-rans (110 losses the first year) and there just wasn’t a statistic worth talking about. With no numbers to fiddle with, it is to the everlasting credit of the predominantly Francophone crowds at Jarry Park that they discovered the true worth of baseball lay in its levity. There was an offbeat panache to the Peanuts-style baseball the city enjoyed, and Rusty Staub, Le Grand Orange, became the redheaded darling of the Expos’ fans.

Staub was there as much to sell the game as to play it; there were even clauses in his contract to this effect. And sell it he did. Rusty led parades; Rusty sent autographed baseballs to sick kids and made them well; he took French lessons (“Maresee bowcupes,” said our Louisiana boy); he went on talk shows, smiling and guffawing in both languages: and he was even seen occasionally with a drink of Seagram’s V.O., in deference to Charles Bronfman, whose distiller’s millions had made the Expos possible.

Jarry Park became a slapstick sideshow with its psychedelic scoreboard, unpredictable organist and thousands of beer-guzzling Montrealers. Out in right field, smiling, joking with the kids, moving like a randy rooster, would be Le Grand Orange himself. And when his turn came to face the opposing pitcher, he'd rattle the bat into his cleats to shake off the mud, spit, shuffle, squint, grunt and slam the ball high over the centre field wall. Then, while women blushed and children squealed, Rusty would

prance like a flaming centaur down the first base line, pirouette to second, third and home, all to the hallelujahs of the Expos’ faithful. Ecstasy, oh ecstasy. The Expos got creamed, but, by gosh, Rusty was brilliant.

Those were the golden days of losing in Montreal — days that ended on April 5, 1972. It was a time when Rusty had gone beyond stardom: he was an institution. The Bank of Montreal was even using him to promote new accounts by inviting children to join the Young Expos Club. (Start up an account with Rusty, kids! Get a swell poster of your idol!)

The Expos were losers but they were fun. And yet, you can’t really blame the Montrealers, who were well accustomed to winning, if they began to hope for a marriage between the joie de vivre of Rusty Staub and a ball club that won. What about it, Gene Mauch, Expos’ manager? You’ve been here as long as Rusty; they say you're good, so why don't you prove it and do something to help our hero?

So Mauch did. April 5, 1972. On that day, Gene Mauch, loser, announced that Rusty Staub, winner, was being traded to the New York Mets for three unknowns: Tim Foli, a punk shortstop without a full year in the big time; Mike Jorgensen, a sometimes first baseman, sometimes outfielder; and Ken Singleton, a nobody outfielder. Three journeymen for a god. Heresy, screamed the fans.

More than a year later, just as midsummer was rolling around, people woke up to find the dilapidated Montreal Expos playing close to .500 ball, a win for every loss. At times it even looked as though they might take over as division leaders. And this made very little sense. While the team admittedly had respectable pitching (Torrez, Marshall, McAnally and Stoneman). there was no one who could put the ball out of Jarry Park with darling Rusty’s style. It made no sense, therefore, that today’s Expos should ever score 54 runs in six games, but they did. Or that third-baseman Bob Bailey, after being practically booed out of Montreal last season, would at times this year be hitting over .300 and breaking several club records along the way. Or that one of Staub’s replacements, Ken Singleton, would be outhitting the great Rusty himself. Worse yet, the punk shortstop in that infamous trade, Tim Foli, was now being talked of as one of the game’s very best infielders.

It all meant that Montreal finally had some statistics for the American baseball aficionado to juggle. What he

saw was that the Expos after four seasons were playing as well as New York Mets did in their eighth, the year they won the World Series. Montreal had suddenly become a contender.

But back in the hometown, the Expos were still the team that had sold Le Grand Orange down the river. Jarry Park still has the zany scoreboard (recording wins for once) and the clowning organist, but the crowds don’t laugh as much these days, the women don’t blush often and the kids no longer squeal. And no one’s heard much lately of the Bank of Montreal’s Young Expos Club. Or of Rusty, for that matter. 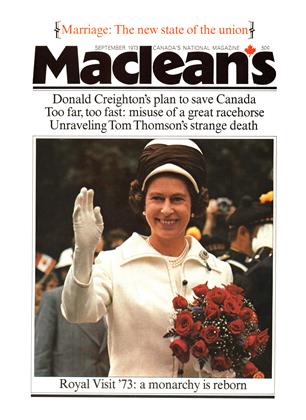